This will have to be one of the long reads of the year. FT has an excellent investigative report on how its Covid 19 vaccine has enabled Pfizer to dominate the global discourse on the pandemic. It's remarkable that it's covered on a mainstream and largely liberal free market newspaper like FT and not some niche website.

The power wielded by Pfizer is truly remarkable,

The spectacular effectiveness of Pfizer’s Covid-19 shot has given the company the key to saving lives and economies... By email, text or phone, global leaders have pleaded with Albert Bourla (its Chief Executive) for orders, in some cases hoping that it might rescue political careers... While western leaders had Bourla on speed dial, the first challenge for some nations was getting his — or anyone at Pfizer’s — ear... The pandemic has ushered in a massive expansion in the power of the state — from the war-footing in economic policy to forcing people to stay in their own homes. But when it has come to medical solutions to the pandemic, governments have been almost completely dependent on private companies...

The vaccine has transformed Pfizer’s political influence... For years, its most famous product was Viagra for erectile dysfunction. Now, the US drugmaker is behind the pharmaceutical product with the record for sales in a single year. Pfizer forecasts sales of the vaccine will hit $36bn in 2021, at least double those of its closest rival Moderna. Pfizer’s ability to dramatically expand production has made it by far the most dominant vaccine maker. In October, Pfizer had 80 per cent market share for Covid vaccines in the EU and 74 per cent in the US.

This is the really scary part,

Since the vaccine’s approval at the end of last year, Pfizer’s decisions have helped shape the course of the pandemic. It has the power to set prices and to choose which country comes first in an opaque queueing system, including for the booster programmes that rich countries are now scrambling to accelerate. Depending on its decisions, countries, regions and even whole continents can open up their economies or risk falling behind in the race to control the virus. Although supplies of vaccines to poorer countries have ramped up since September, the global disparities are stark. So far, 66 per cent of people living in G7 countries have had two vaccine doses; in Africa, only 6 per cent. The number of people in high income countries who have had booster shots is almost double the number in low income countries who have received first and second doses... How Pfizer wields this newfound power — and what it plans to do next — is treated as top secret, as the vaccine maker blacks out large chunks of contracts and binds even independent scientists with non-disclosure agreements. 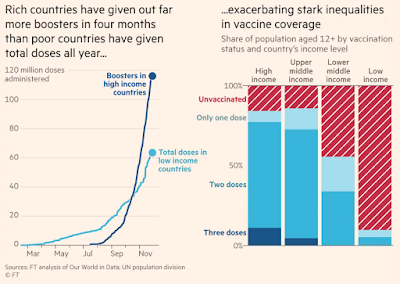 And it cannot even claim to have invented the vaccine,

The vaccine Bourla has been fielding phone calls from world leaders about was actually invented in the labs of BioNTech, a pioneering company from the medieval German town of Mainz on the Rhine river. In late January 2020, BioNTech’s chief executive Ugur Sahin... marshalled BioNTech’s resources to invest in discovering a vaccine. But... he had to search for a partner who had the dollars he needed. His first stop was Pfizer because they had already worked together... The fact that it is now known universally as the Pfizer shot is “the biggest marketing coup in the history of American pharmaceuticals”. Unlike AstraZeneca and Johnson & Johnson, Pfizer never considered selling its Covid-19 shot without making a profit. BioNTech needed to make money from its first product to plough back into the business. BioNTech would pocket half the profits but Pfizer controlled commercialising the vaccine in every country except the founders’ home territories of Germany and Turkey, and China, where BioNTech had already signed a deal with Fosun Pharma. While BioNTech took up to €375m funding from the German government for development of the vaccine, Pfizer rejected US government money so it could keep complete control of the vaccine, including the crucial issue of pricing. So when Pfizer opened negotiations with the US government in early summer 2020, it took an uncompromising stance: the company demanded $100 a dose — $200 a course — according to people familiar with the matter... After Moderna, which had taken large US government grants, agreed a much lower price, Pfizer eventually settled on $19.50 a dose in the initial contract with the US, and equivalents in other western countries. But this was effectively four times the price of J&J’s single dose shot, and five times higher than a dose of AstraZeneca’s.

But its success lies in manufacturing and capacity expansion.

Pfizer’s strategy to keep more of its production in-house paid off. Along with BioNTech, they had nine of their own facilities, with the largest in Kalamazoo, Michigan and Puurs, Belgium, as well as 20 contract manufacturers. It went to extraordinary lengths to secure production. When Pfizer was unable to find appropriate ultra cold storage for its vaccines while in transit, it designed a thermal container itself. In order to secure dry ice to cool them, it built its own dry ice factory. This combination of control and expertise enabled a dramatic productivity leap. When Pfizer first began to supply the vaccine, it took an average of 110 days from the start to putting vaccine into a vial. Now, it takes an average of 31 days. In January, it said it could deliver 2bn doses this year but by August, it said it was on track to manufacture 3bn. Next year, it plans to make 4bn doses. In contrast, AstraZeneca struggled to scale up production. The Anglo-Swedish drug company, which had partnered with the University of Oxford, had planned to deliver 300m doses to the EU in the first six months of this year. But after a series of problems, it cut its deliveries dramatically, to just 100m... The problems were replicated at J&J, which at one stage paused its EU rollout.

This is also a teachable moment on the limits to the efficiency maximising approach of outsourcing production and relying only on branding and the merits of in-sourcing core functions.

Given the near life-and-death nature of the demand, it was only natural that politicians balked at pushing back.

“Politicians have been badly burnt. The few of them who have tried to negotiate on price or other forms of access have been politically hurt, particularly in the EU where after the early rollout there were enormous recriminations,” says Lawrence Gostin, a professor of global health law at Georgetown University. “People asked ‘Why didn’t you give companies what they are asking for?’” Ursula von der Leyen, president of the EU Commission, began... to negotiate a mega-deal of up to 1.8bn shots to be delivered all the way until 2023. “The member states wanted access to the vaccine for the next few years and to lock that down early,” says Sean Marett, BioNTech’s chief commercial officer, who adds that price was not the critical issue in the talks. “I think what was important was reliability and dependability. People were scared. You could feel it. Europe was worried about lockdowns and variants and wanted to reassure people.” The EU now expects five times more doses from Pfizer than its next biggest supplier, Moderna. Such a huge commitment would usually result in a price cut. But Pfizer raised the price by more than a quarter from the initial agreed level of €15.50 to €19.50 — and von der Leyen agreed. Pfizer also raised the price by a similar amount in its 2021 contracts with the US and the UK... negotiators feared that pushing back could delay the delivery of doses. Jonathan Cushing, head of global health at Transparency International, says: “It is effectively a race to the bottom: whoever signs over the most, will get the vaccines quickest”.

The academia, intelligentsia, and media failed to step up in creating the moral suasion to force good behaviour. Instead they spent their time on narrow academic debates and blaming governments for not doing enough. It's staggering that such profit gouging got such a free pass among the gatekeepers and opinion makers.

Worse still, with the Omicorn and other mutation threats, Pfizer's influence appears set to continue, as also the vaccine inequality,

The race to vaccinate the world has been complicated by rich countries’ booster programmes. Boosting is now well under way: Israel has already given a third dose to 44 per cent of its population, the UK has done 22 per cent, and the US just over 10 per cent. Even before the emergence of the Omicron variant on Thursday, these booster programmes looked set to cement Pfizer’s dominance of the Covid vaccine market because of the high efficacy of its shot and the company’s success at production.

Instead of claiming that it has "saved the world", a more appropriate description would be "saved the developed world". For Pfizer was not used by either China or India, and the share of Africa is tiny. Suffice to say Pfizer was practically unavailable for 70% of the global population!
This, and the likes of India's experience with private sector vaccine delivery (not to speak of market abuse by hospitals etc), should be a sobering reminder about the need to both use public policy and regulation to deliver vaccine mandates and also restrain private pharmaceutical industry price gouging in times of public health emergencies.
Posted by Urbanomics at 7:13 AM