The geopolitics of renewable energy transition

FT has an excellent long read about how clean energy is impacting global geo-politics. Nowhere is this change more stark in the shift from oil to other cleaner sources of energy.

1. The graphic below shows that the cost declines have been sharpest with solar. This also means that the potential for declines in the other areas like offshore wind is high. 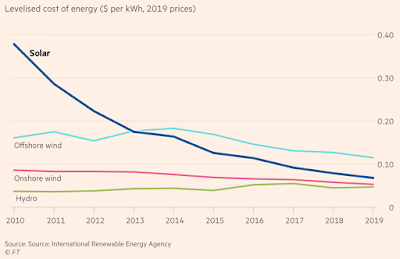 2. The graphic below captures the fossil fuel dependence of producer countries. 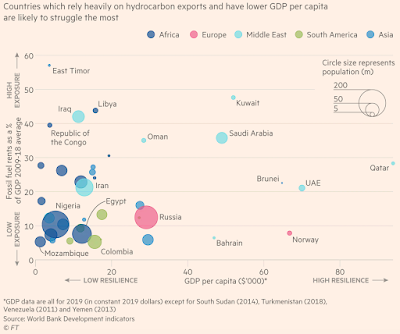 3. An interesting feature of renewable energy is that unlike oil and gas which are concentrated, they are spread widely across the world. Given the widely dispersed availability of renewable energy sources, the differentiators could be the ability to export electricity or green fuels, control of raw materials used in clean energy (like lithium and cobalt), and gaining edge in clean energy technologies.

4. Trade in electricity emerges as an area of great potential and with unintended shifts in power balances. Sample this for a sense of the shifts,

When it comes to exporting clean electricity, countries such as Norway, Bhutan and France are already far ahead. In a few months’ time, Norway and the UK will finish constructing the world’s longest subsea electricity cable, the North Sea Link. The Norwegian side of the cable runs through snow-capped mountains and a deep lake, then travels underwater for more than 720km, across the North Sea, until it reaches the UK. The highly specialised cable is also manufactured in Norway, in a factory located next to a fjord, so that it can be easily loaded on to ships and taken out to sea for installation. The North Sea Link will be Norway’s seventh subsea interconnector, allowing the country to export its abundant hydropower to its neighbours... Portugal recently agreed to ship green hydrogen to the Netherlands, while Germany is weighing a deal to buy hydrogen from Morocco... Countries with lots of sunshine, such as Spain and Portugal, are eager to find ways to convert that into a commercial fuel. Trading power is also on the rise: there are already more than 80 cross-border interconnectors in Europe, with 20 planned or under construction.

5. Then there is China. There are four types of consequences.

(a) The first is that Chinese companies have been at the forefront of the trend to control raw material sources globally. This should be a matter of great concern,

China produces more than 70 per cent of all solar photovoltaic panels, half of the world’s electric vehicles and a third of its wind power. It is also the biggest battery producer and controls many of the raw materials crucial for clean-tech supply chains, such as cobalt, rare earth minerals and polysilicon, a key ingredient in solar panels... As major economies work to reach their net-zero goals, they will have to buy more solar panels, batteries and critical minerals. The main supplier? China.

The example of CATL and battery manufacturing is emblematic,

China’s sway over battery manufacturing reflects its long-term strategy. Its poster child is CATL, Contemporary Amperex Technology. Founded in 2011 in the mountainous eastern fishing town of Ningde, the company owes a large part of its success to government protectionism. In 2015, as China was pouring billions into its electric vehicle market, the government suddenly announced a list of approved battery-makers who were eligible for subsidies, none of which were foreign. This was a boon to domestic businesses: CATL grew from producing 6.2GWh worth of batteries in 2016 to 34GWh last year — a third of the global market. Now the biggest producer in the world, it has contracts with Daimler, BMW and Tesla among others. Beijing dominates the supply chain from the mines in the DRC to the final production of lithium-ion batteries. Its companies control more than 85 per cent of the world’s refined cobalt chemical capacity, essential for most lithium-ion batteries. It also mines almost all of the world’s rare earth minerals, which are used in electric motors and wind turbines. Making an electric vehicle without involving China is almost impossible.

(b) Then there is the beneficial effect of China's mega-scale manufacturing appetite and capacities.

China’s manufacturing prowess has helped to drive down the global cost of batteries, making electric cars more competitive. This echoes what has happened with other clean energy technologies, from solar panels to polysilicon production: subsidies led to overcapacity and a rush to produce, and ended up with China dominating global markets. The cost of lithium-ion batteries today is just one-seventh what it was a decade ago, according to Bloomberg New Energy Finance.

(c) There are those where the impacts will be uncertain and mixed,

One of Xi’s pet projects is the Global Energy Interconnection — a network of high-voltage transmission lines that would span the globe. The project envisages cheap electricity being shipped around the world — from dams in Congo to Europe. It is headed by Liu Zhenya, the former chief of State Grid, who describes it as the “internet of energy”. While the Global Energy Interconnection will take decades to build, it signals how Chinese policymakers are thinking about the new global order. “The idea is to connect countries with [clean energy] resources, with those that have the demand,” explains Xu Yi-chong, author of Sinews of Power: The Politics of the State Grid Corporation.

(d) Finally, the energy transition could end up disproportionately benefiting the Chinese companies.

Jonas Nahm, assistant professor of energy at Johns Hopkins University, says new US climate targets could benefit Chinese companies: “This administration is caught in a pickle, which is that all of the climate goals that are being promised will rely on China, at least in the short term.” Other global leaders face a similar quandary: as they invest more in the energy transition, some of that money will filter back to China. “This is prompting a lot of anxiety, especially amid this proliferation of net-zero commitments,” says Van de Graaf, “because other countries, such as Japan, the US and the EU, will make a transition that is very costly, and the economic benefit of that will be reaped disproportionately by China.”

6. There is also the point about the ingredients for commercialisation of innovations,

Steven Chu, former US energy secretary... believes that the US — which could see as much as $2tn invested in climate initiatives proposed by President Joe Biden — still has an edge in innovation. “I personally think [the most innovation] is still in the United States, in terms of laboratory innovation in new batteries,” he says. “But then it really is a matter of how you get that invention and discovery . . . to become large-scale manufacturing. And that’s where China excels.”