If wishes were horses, then pigs could fly! On many complex public issues there are logically neat ideas which have the irresistible appeal of appearing to solve the problem. Unfortunately, almost always, they are deceptive and misleading.

Take the examples of power distribution and local government finance, two of the most persistent and intractable of public policy problems in India. Over the years, successive governments have tried several different approaches to address the problem. On the distribution side, they have revolved around efforts to bridge the cost recovery gap by lowering distribution losses and raising tariffs. On the municipal finance side, they have focused on rationalising property tax and raising their rates. Unfortunately, primarily for complex and very sensitive political economy reasons, these efforts have struggled to make much headway.

Experience tells us that such political economy issues cannot be decreed away. Let's examine each of the two areas separately.

Take the power distribution sector. The new draft Tariff Policy talks about the logically neat and progressive ideas of rationalising tariff slabs into a few consumer categories (some states have nearly a 100), reversing the inverted tariff structure (whereby industrial consumers pay more than the household consumers), penalising discoms for service deficiencies, including load shedding. It even has a neatly structured tariff calculation formula - retail tariff calculated based on 15% loss immediately, and 10% loss in three years.

Without getting into the details, apart from the tariff slab rationalisation (to some extent), the rest are all unlikely to get much far. The distribution loss reduction assumptions, as I have written earlier, here and here, are just completely unrealistic. Somit Dasgupta has a good column on its difficulties.

In simple terms, the Tariff Policy's intent and state-of-art design cannot be faulted. Every expert should embrace it. The problem though lies with its application to the prevailing contexts across Indian states.

Take the other example of local government finance. As part of the post Covid 19 stimulus package, the Government of India enhanced the state government borrowing limits from 3 to 5% of GSDP for the 2020-21 fiscal year on them meeting reform requirements on portable national ration card, ease of doing business improvements, power distribution company reforms, and augmentation of urban local body (ULB) revenues. In case of the ULBs, the states have to notify property tax floor rates in consonance with circle property rates and notify water and sewerage charges.

I am generally in agreement of using conditionalities on state governments for additional financing from the Government of India. Given the country's chaotic political economy, such conditions may perhaps be the only way in which certain politically sensitive reforms are achieved. But such conditionalities should satisfy the test of practical feasibility. While some are certainly achievable, the realisation of the ULB reforms within a year is certainly impossible. The same set of ULB reforms have been pushed several times over the last 2-3 decades, with limited results. In fact, given the economic damage, such a reform, with its contractionary effect on household incomes, is most likely to have a negative impact. This is a good summary of the challenge,

The history of ULB revenue reforms in India is dismal. Even incentivised funding schemes like JNNURM and AMRUT have not been able to push these reforms. In fact, ironically while the population of Indian cities is growing, ULB revenue is decreasing. An ICRIER report, which is based on data from 37 municipal corporations, shows that the total municipal revenue has declined from 0.49% of GDP in 2012-13 to 0.45% in 2017-18. These corporations’ own source revenue has also dropped from 0.33% of GDP in 2012-13 to 0.23% in 2017-18.

The ICRIER Report, State of Municipal Finances in India, 2019, here, shows that municipal revenues of all kinds have not only not changed over more than a decade but has even been declining. 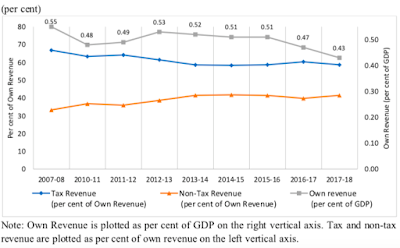 Of course, enterprising state governments will always find ways to work around these requirements. For example, states may move over from the prevailing system to assessment based on ready reckoner rates, but would keep the ready reckoner rates low or tweak the formula to keep the percentage of it low. In fact, a property tax calculation formula with ready reckoner rates can be easily manipulated to get whatever result the state wants.

Both these are good examples of outcomes-based policy making. There is an irresistible allure around the idea of focusing on the destination and framing policy around it so that the stakeholders can adjust their actions accordingly. The problem, as I have written earlier (see this, this, this, this, this, and this), is that the destination itself is most often impossible to achieve. Deep political economy and acute state capacity constraints cannot be decreed away to realise destination. The hard work will have to be done.

Even as power distribution sector struggles to get its act in order, the upstream generation remains hobbled by regulatory uncertainties which are exacerbated by inordinately delayed litigation. The latest example is the plight of the PPAs with the Mundra-based Adani (4620 MW) and Tata CGPL (4000 MW) and Salaya-based Essar Power (1320 MW), which have been stuck in litigation after the Indonesian government revised its coal pricing policy in 2010. The subsequent process of renegotiation is exceptionally tardy by any standards.

In 2012, Adani and Tata sought compensatory tariff from CERC, which ruled in their favour in 2014, only for APTEL to reject and then accept the CERC order in 2016, and for Supreme Court to reject the developer's claim in 2017. Since then, it has been pending with the PPA signing state governments to consider the claims. The Gujarat government, after having accepted a revised PPA in 2018 with cost-sharing among all sides and based on the recommendations of a high-power committee appointed by it, has now revised its stance and cancelled the supplemental PPA!

The reasons indicated being "the market trend of Indonesian coal prices (have) changed the scenario and to safeguard the interest of consumers, the government of Gujarat has revoked the regulation dated December 1, 2018 as the same was not fulfilling its objective and purpose"; and "supply of power to Gujarat.. shall not be at a higher tariff than the tariff charged to other procurer states". It appears that we have policy being tweaked opportunistically to change the rules of the game. In sum, ten years on and after several rounds of litigation, we are no closer to a settlement to the claim.
Posted by Urbanomics at 3:39 AM