1. Nick Bloom has this explanation for increasing inequality,

The real engine fueling rising income inequality is “firm inequality”: In an increasingly winner-take-all or at least winner-take-most economy, the best-educated and most-skilled employees cluster inside the most successful companies, their incomes rising dramatically compared with those of outsiders. This corporate segregation is accelerated by the relentless outsourcing and automation of noncore activities and by growing investment in technology... studies now show that gaps between companies are the real drivers of income inequality. Research I conducted with Jae Song, David Price, Fatih Guvenen, and Till Von Wachter looked at U.S. employers and employees from 1978 to 2013. We found that the average wages at the firms employing individuals at the top of the income distribution have increased rapidly, while those at the firms employing people in the lower income percentiles have increased far less. In other words, the increasing inequality we’ve seen for individuals is mirrored by increasing inequality between firms. But the wage gap is not increasing as much inside firms, our research shows. This may tend to make inequality less visible, because people do not see it rising in their own workplace. This means that the rising gap in pay between firms accounts for the large majority of the increase in income inequality in the United States.

2. Fascinating series of graphics in Citylab that captures the evolution of urban planning.

3. The Economist has a nice graphic from the work of Zhang Qiang et al which tries to capture the deaths due to global air pollution arising from physical transport of particles and trade of goods and services.

Rich countries are exporting air pollution, and its associated deaths, as they import goods. 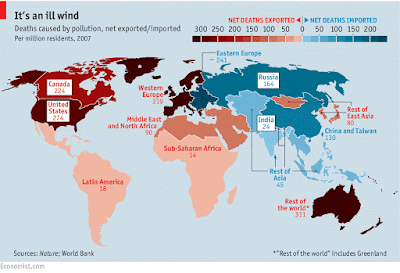 Countries like India are importing air pollution related deaths as they export products! Or when Trump talks next time about what other countries should do to reimburse America, he should be asked what US will pay to compensate the victims from its consumption.

4. Fascinating study by Wendy Williams and Stephen Ceci about how perceptions cloud opinions, in the context of the liberal opposition to a speech by Charles Murray (of "Bell Curve" fame) at Middlebury College, Vermont,

So we transcribed Mr. Murray’s speech and — without indicating who wrote it — sent it to a group of 70 college professors (women and men, of different ranks, at different universities). We asked them to rate the material on a scale from 1 to 9, ranging from very liberal to very conservative, with 5 defined as "middle of the road"... American college professors are overwhelmingly liberal. Still, the 57 professors who responded to our request gave Mr. Murray’s talk an average score of 5.05, or "middle of the road"... No one raised concerns that the material was contentious, dangerous or otherwise worthy of censure. We also sent the transcript to a group of 70 college professors who were told that the speech was by Mr. Murray. The 44 who responded gave it an average rating of 5.77. That score is significantly more conservative, statistically speaking, than the rating given by the professors unaware of the author’s identity (suggesting that knowing Mr. Murray was the author colored the evaluation of the content). Even still, 5.77 is not too far from “middle of the road.” Finally, we divided Mr. Murray’s speech into 10 portions and got ratings on each portion from a paid sample of 200 American adults via Amazon’s Mechanical Turk, an online marketplace for jobs and tasks. These participants identified themselves as having an average political orientation of 4.21, or leaning slightly liberal. When their ratings for the 10 sections were averaged, they too gave the talk a centrist score: 5.22. (Average ratings for the 10 portions ranged from 4 to 6.)

5. So the "build and they will come" approach to opening bank accounts may after all have been an effective strategy. A new paper disaggregates various confounders and find evidence of rising active transactions (cash deposits or ATM withdrawals as against interest debits or DBT transfers) for the period Aug 2014 to Nov 2016,

We find that the number of active transactions per account transacted by PMJDY account holders starts off slow but increases with the age of the account... Active transactions initiated by account holders represent nearly 45% of all transactions... account balance grows steadily with time. This shows that PMJDY accounts are also used for accumulating savings... Finally, in line with the national numbers, we find a steady decline in the number of zero-balance accounts... Simply opening the gates of the formal sector seems to bring in the excluded.

The low baseline access surely helps. But instead of sitting on the laurels, the challenge now is to increase utilisation.

6. The extend and pretend continues with the stalled projects, and things are getting worse. Livemint reports that while the proportion of stalled private sector projects climbed to a 52 quarter high of 20.2% in the March quarter, the growth of new project announcements hit a 10 quarter low. 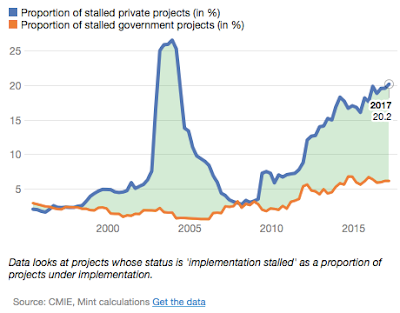 The breakup of the reasons for stalling show this. 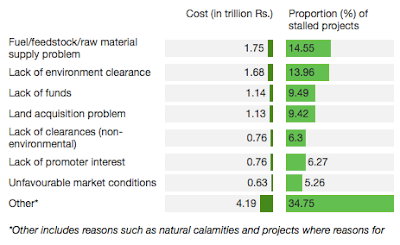 But, as I blogged earlier, these stats conceal more than they reveal. A very significant proportion of these projects are fundamentally unviable projects which need to be scrapped and losses apportioned among all concerned. Extend and pretend will only keep increasing the final cost.

7. How about something similar to this for India?


The Paperwork Reduction Act in the US requires the government to justify any information it seeks, explain how it will be used, and to estimate how much effort it would take for a person to provide this. No form can be introduced until it has been approved by a specialist agency with expertise in process design. The US government publishes an estimate of the total time required by citizens to fill its forms and strives to reduce this.

At the least a first order costs-benefits analysis before any form is notified or issued by a government agency?

8. Livemint has a very good story of why increased production of tur dal in 2015-16 has led to demand for farm loan waivers for farmers in Maharashtra. While the two preceding years were drought hit, it led to central drought relief measures as well as loan reschedules, the combined effect of which significantly mitigated the suffering. In contrast, in 2016-17, the distress has been market-driven,

Both the centre and state appealed farmers to plant more pulses, oilseeds, and move away from sugarcane and cotton. Farmers responded by producing a bumper crop of pulses, especially tur... Maharashtra is estimated to have produced 1.1 million tonnes of tur this year as compared to only 440,000 tonnes in 2015-16. The MSP for tur has been fixed at Rs5,050 per quintal but farm activists and experts say farmers are being forced to sell for Rs3,000-3,500 to traders since the government procurement agencies claim they do not have the infrastructure to store tur on this scale. An official at the state’s agriculture marketing department said the various government agencies had managed to procure only 340,000 tonnes so far for Rs1,600 crore, of which dues worth Rs300 crore are yet to be paid to farmers. Farmers don’t have holding capacity and so, they are forced to sell to traders at a lower price if the state procurement agencies refuse to buy.

9. The defeat of AAP in the Delhi municipal election results have ensured that property taxes will not be abolished in the City. Important, because of this,

Property tax is the single most important source of revenue for municipal corporations and municipalities. It accounts for 30 per cent of “own” municipal revenues in India... Total municipal revenues in India declined from 1.08 per cent of the GDP in 2007-08 to 1.03 per cent in 2012-13, the latest year for which this information is available. The same ratio is 6 per cent in South Africa and 7.4 per cent in Brazil. What is more, the transfers from the state governments in India are neither guaranteed nor predictable. In South Africa, the transfers are determined and announced at the time of the annual budget.

10. FT reports that emerging markets have overtaken developed economies in filing of patents.

The 12 leading EM nations applied for 1.49m patents in 2015, outstripping the 1.48m in developed market countries, according to figures from the World Intellectual Property Organisation, collated by Comgest, a Paris-based asset manager... The figures are a far cry from 2004, when the 12 emerging market countries, which account for the vast majority of developing world filings, made just 372,000 applications, 29 per cent of the 1.3m made by the advanced world. 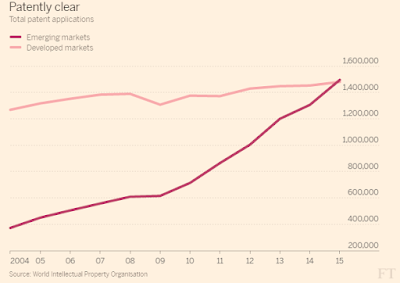 11. The latest in urbanisation from China is the announcement of the development of Xiongan New Area as a greenfield city in Hebei province, two hours from Beijing, with the objective of decongesting the capital. The project is backed by President Xi Jinping. It is expected that this sleepy backwater with agriculture will house many universities and other institutions to be relocated from Beijing,

It’s also intended to ease the pressure on Beijing, the capital city that plans to cap its population at 23 million by 2020. Morgan Stanley expects the investment in infrastructure and relocation to run about 2 trillion yuan ($290 billion) in the first 15 years... It spans three counties. The infrastructure build-out will cover 100 square kilometers initially, expand to 200 square kilometers and eventually occupy a space of about 2,000 square kilometers, similar to Shenzhen in the south now, the government says. It will have 5.4 million people in 15 years and boost China’s investment growth by 0.33 percentage point and its gross domestic product by 0.13 percentage point to 0.19 percentage point per year, according to Morgan Stanley’s base-case estimate. 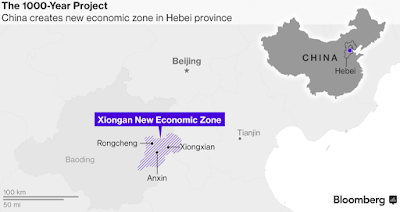 12. Finally, good FT report on London property market which points out that it is cheaper to buy than rent, as reflected in the lower mortgage payments. But any significant dent on the affordability problem can come only from freeing up more land for construction,

According to a 2015 report from the Adam Smith Institute, building on just 3.7 per cent of London’s greenbelt would free up enough land for 1m new homes — supply which could end the affordability crisis for many young Londoners.