1. Amidst all the negative news that surrounds Europe, we overlook the real successes. Spain's recovery from the binge growth of the last decade is outstanding. Even more impressive has been its resolve to push ahead with reforms to labour market, banking systems, and corporate bankruptcies. The wage restraint and flexibility given to companies under the 2012 labor market reforms have ensured that the country's unit labour costs have fallen by 14 per cent since 2010, thereby enhancing the country's external competitiveness.

But the chronicle of the  construction boom that built up the excesses is worth remembering,

That boom coincided with the arrival of millions of migrants from Latin America, eastern Europe and north Africa, fuelling demand for homes that eventually reached fantastical proportions. In 2007, Spain accounted for more housing starts than Germany, France, Britain and Italy combined and 2.7m Spanish workers were active in the construction sector — equivalent to 13 per cent of the national workforce.

In Valencia, the boom was even more pronounced, helped by two factors that had nothing to do with central bankers in Frankfurt. One was the decision by the regional and local government to sink billions of euros into one-off events and pharaonic architectural designs. The other was the proximity between political leaders and the cajas, or regional savings banks, under their control. Poorly run and poorly supervised, the cajas provided the rocket fuel for Spain’s housing boom, dutifully funding one unviable project after another... Local politicians had little incentive to urge restraint, if only because so many of them stood to benefit personally from the boom... But the combination of mismanagement, hubris and greed, coupled with a banking system that lent according to political not financial criteria, proved disastrous. As the bubble continued to inflate, it touched on the lives of more and more people: teenagers left school without any qualifications to work on building sites. Orange farmers pulled up their groves to build apartment blocks. Owners of family companies abandoned them to sell real estate. A region that once prided itself on its manufacturing industry succumbed to the dream of dinero fácil or easy money.

Construction booms, especially those fed by real estate prices, should count as the most pernicious forms of resource misallocation. This story plays itself out with surprisingly high frequency, including in developing countries.

And its banking sector clean up was instructive,

“Spain did a textbook bank rescue,” says Angel Ubide, a managing director at Goldman Sachs and until recently a senior fellow at the Peterson Institute for International Economics. “It shut down the banks that couldn’t survive and recapitalised the ones that could. And then it moved all the bad assets into a bad bank.” The overhaul killed off the cajas, which were either folded into larger private banks or forced to become normal lenders, free from political influence. But it also meant that markets regained trust in the broader banking system relatively quickly. Balance sheets were cleaned up, bad loan ratios fell and loan loss provisions started to decline.

Unlike the misallocation problem, I don't think the banking sector clean up is relevant to India.

Annual gross savings in the Chinese economy amount to 75 per cent of the sum of US and EU savings, at over $5tn last year. China’s gross investment, at 43 per cent of gross domestic product in 2015, was still above its share in 2008, even though the economy’s rate of growth had fallen by at least a third. To sustain such high investment, the ratio of credit to GDP soared from 141 per cent of GDP at the end of 2008 to 260 per cent at the end of last year... China saves more than it can profitably invest at home. In 2015, gross national savings were 48 per cent of GDP. World Bank data show that households contributed only a half of this. The rest came from corporate profits and government savings. International comparisons suggest that economic growth of 6 per cent warrants investment of little more than a third of GDP. This indicates that China’s surplus savings — surplus, that is, to domestic requirements — may be as much as 15 per cent of GDP.

3. India has one of the highest trade tariff barriers among all major economies, 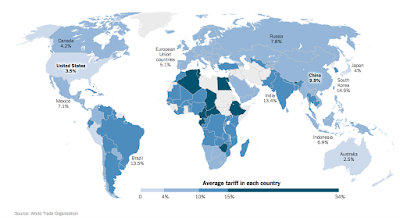 UberEats launched in London in June, promising “the food you want, from the London restaurants you love, delivered at Uber speed”. In a bid to recruit self-employed couriers to ferry food from restaurants to customers, UberEats initially offered to pay £20 an hour. But as customer demand increased, the company began to reduce pay. By August, the couriers were on a piece rate with a fiddly formula: £3.30 a delivery plus £1 a mile, minus a 25 per cent “Uber service fee”, plus a £5 “trip reward”. Then, one day, the couriers woke up to find the app had been updated again. The “trip reward” had been cut to £4 for weekday lunch and weekend dinner times, and to £3 for weekday dinner and weekend lunch times. Outside those periods, it had been cut altogether.

Not only does e-commerce firms benefit from regulatory arbitrage, they also have the flexibility of changing the rules of the game at their choice.

5. Fascinating graphic in the Times that captures the scale and speed of urbanisation in China's Pearl River Delta. Guangzhou, Shenzhen, and Dongguan have become bustling economic centres in Guangdong province over the last 35 years from being small backwater townships. The rapid growth has encroached into the wetlands, reclaimed water courses, and destroyed mangrove forests, making the region vulnerable to recurrent floods and sea water ingress. So much so that Guangzhou has been classified as the city most under risk from climate change.

6. Incidentally Economist has a feature on the Pearl River Delta (PRD), comprising nine cities of Guangdong province and Hong Kong and Macau. Its significance,

The World Bank recently declared the PRD the world’s biggest megacity, surpassing Tokyo. With over 66m residents, it is more populous than Italy or, just, Britain... Its GDP, at more than $1.2trn, is bigger than that of Indonesia, which has four times as many people. It has been growing at an average of 12% a year for the past decade. As a global trading power the region is outranked only by America and Germany. For China itself, the PRD is crucial. Though it accounts for less than 1% of the country’s territory and 5% of its population, it generates more than a tenth of its GDP and a quarter of its exports. It soaks up a fifth of China’s total foreign direct investment and has attracted over a trillion dollars-worth of FDI since 1980... Most remarkably, a region once known for copycat products is emerging as a world-class cluster for innovation. 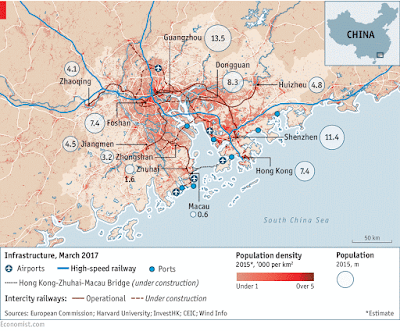 7. City Lab has this nice video of how existing road patterns can be rationalised to squeeze in bike lanes and parking, without reducing vehicle volumes and carrying capacity and while increasing safety.
Not sure of its relevance to developing countries like India where lane driving comes at a premium and bike usage unlikely to take-off for practical reasons.

8. The latest version of inequality analysis by Piketty-Saez-Zucman is out.

For the 117 million US adults in the bottom half of the income distribution, growth has been non-existent for a generation, while at the top of the ladder it has been extraordinarily strong... From 1980 to 2014, for example, none of the growth in per-adult national income went to the bottom 50%, while 32% went to the middle class (defined as adults between the median and the 90th percentile), 68% to the top 10%, and 36% to the top 1%... 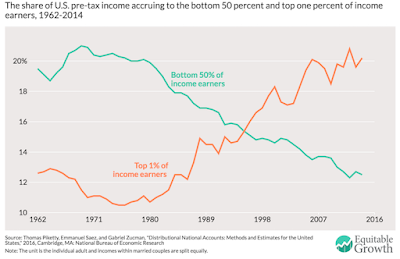 9. A new paper points to the sustained and much faster economic expansion since the dawn of the 20th century to "less shrinking in recessions",

Stephen Broadberry of Oxford University and John Wallis of the University of Maryland have taken data for 18 countries in Europe and the New World, some from as far back as the 13th century. To their surprise, they found that growth during years of economic expansion has fallen in the recent era—from 3.88% between 1820 and 1870 to 3.06% since 1950—even though average growth across all years in those two periods increased from 1.4% to 2.55%. Instead, shorter and shallower slumps led to rising long-term growth. Output fell in a third of years between 1820 and 1870 but in only 12% of those since 1950. The rate of decline per recession year has fallen too, from 3% to 1.2%.

10. Finally, the best read comes from a fantastic article in the Economist about how parking norms influence the urban form and growth

In 2004 London abolished minimum parking requirements. Research by Zhan Guo of New York University shows that the amount of parking in new residential blocks promptly plunged, from an average of 1.1 spaces per flat to 0.6 spaces. The parking minimum had boosted supply far beyond what the market demanded.

The cost of parking mandates invariably gets passed on across the economy,

Donald Shoup, an authority on parking economics, estimates that creating the minimum number of spaces adds 67% to the cost of a new shopping centre in Los Angeles if the car park is above ground and 93% if it is underground. Parking requirements can also make redevelopment impossible. Converting an old office building into flats generally means providing the parking spaces required for a new block of flats, which is likely to be difficult. The biggest cost of parking minimums may be the economic activity they prevent.

Free parking is not, of course, really free. The costs of building the car parks, as well as cleaning, lighting, repairing and securing them, are passed on to the people who use the buildings to which they are attached. Restaurant meals and cinema tickets are more pricey; flats are more expensive; office workers are presumably paid less. Everybody pays, whether or not they drive. And that has an unfortunate distributional effect, because young people drive a little less than the middle-aged and the poor drive less than the rich. In America, 17% of blacks and 12% of Hispanics who lived in big cities usually took public transport to work in 2013, whereas 7% of whites did. Free parking represents a subsidy for older people that is paid disproportionately by the young and a subsidy for the wealthy that is paid by the poor.

Posted by Urbanomics at 1:56 AM