The costs of informality

Ananth has an excellent article that cautions the romanticism of small enterprises. He points to the Annual Survey of Industries 2013-14 report which shows that 72.68% of the 1,85,690 operating factories employ less than 50 workers, makes up 15.62% of all factory employment, utilize only 7.06% of fixed capital, produce 11.18% of gross output, and generates 7.71% of net manufacturing value added. And those with more than 200 employees forms a mere 9.06% of factories, utilize 78.61% of fixed capital, provide 61.44% of employment, produce 71.15% of gross output, and generate 75.78% of net manufacturing value added.

The figures would be even more disturbing if we take into account the respective shares among all economically active 58 million odd enterprises. It is very clear that Indian industry has a massive problem of "smallness". But its origins can be traced back the challenges posed by pervasive informality. The evidence is overwhelming that small enterprises in India start and remain informal, with limited productivity gains throughout its life. See the numerous graphics here and you'll realize that among developing or even the poorest countries, India's level of informality is simply extraordinary. Given this, encouraging more such small enterprises, howsoever much politically appealing, without addressing the root causes of informality may be a medication that worsens the disease.

The debate in India about job creation has become anchored around entrepreneurship. Incentivize innovation and entrepreneurs and jobs will follow. Unfortunately, that is unlikely to happen. Instead, for the vast majority of Indians, like those elsewhere in the world across history, the pathway to a good livelihood would most likely have to come through formal jobs in medium and large enterprises. In other words, we need more numbers of enterprises, which start formal and small, and grow into medium size or bigger, thereby creating large numbers of jobs.

A WTO study on informality quantifies the magnitude of certain costs,

In the specific area of trade, the paper makes the distinction between de jure and de facto trade openness. The former is a measure of implementation of trade reforms which immediately results in labor and other market readjustments, while the latter represents the actual flow of goods and services from and into the country. The paper says that "de jure trade reforms may be expected to require some time before they achieve de facto trade openness."

Empirical analysis carried out for the purpose of this study shows that more open economies tend to have a lower incidence of informal employment. By contrast, trade reforms, such as cuts in tariff rates, tend to be associated with higher informal employment. Likewise, larger inflows of FDI tends to be associated with higher informal employment. These findings may suggest that even if trade and investment reforms hold the promise of more and better jobs in the long run, such reforms tend to be associated with negative labour market developments in the short run. ƒDecent work policies can help to improve this trade-off between the short and long-term effects of trade reforms. Evidence in this chapter suggests that the incidence of informal employment is lower in countries that enjoy: a) better enforcement of the rule of law, including core labour standards, b) well-designed social protection and labour regulations, notably appropriately set minimum wages; and c) more transparent business regulations and a more supportive environment for sustainable enterprise creation.

The paper tries to quantify the effect of various policies and regulation on informality. 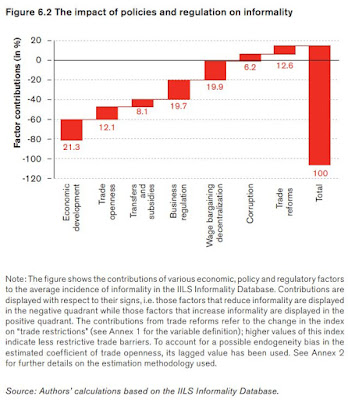 It is unsurprising that economic development is the biggest contributor to reducing informality. The surprises are that business regulation and subsidies and transfers (read, universal social safety net) do not appear to have the expected impact. Interestingly, decentralized wage bargaining is the second largest contributor to reduction of informality.
Posted by Urbanomics at 8:15 AM