Status note on the Rupee

Is the Rupee over-valued? I have tried to capture the relative real effective exchange rate (REER) trends of Indian Rupee against those of its emerging market peers. 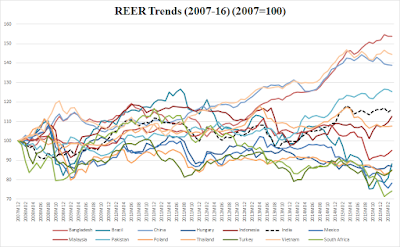 The graphic (data from Breugel) presents the REER of 14 major emerging economies, including two of India's neighbours, since 2007. As on September 2008, with the base year of 2007, the Indian currency was the weakest in the sample. Fast forward to March 2016, and the rupee has appreciated more than all but four currencies, rising steadily by 16% since January 2007. It was largely stable during the peak of the crisis, but declined in mid-2013 as the taper tantrum played out. However, since the September 2013 trough, the rupee has steadily appreciated by more than a fifth, making its real appreciation significant. 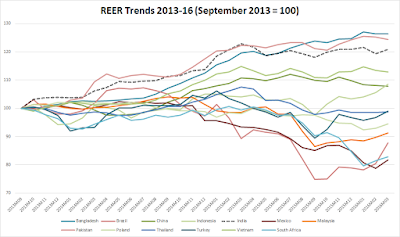 Apart from China, among its peers, only Bangladesh, Vietnam, and Pakistan have had greater currency appreciation since 2007. Since the taper tantrum trough, only Bangladesh and Pakistan currencies have appreciated more. The Bangladeshi Taka has appreciated by nearly 54% and Vietnamese Dong by nearly 44% since January 2007. Interestingly, but for the 2009-10 blip, Bangladesh and Vietnam have been growing steadily upwards of 5-6% for some time now. Pakistan, growing at 3-4%, clearly has a currency over-valuation problem.

Since September 2013, India's central bank has waged a very firm battle against inflation and has been largely successful in anchoring inflationary expectations. In the process, it has not only managed to provide macroeconomic stability but also enhanced the perception among investors. The problems elsewhere coupled with the country's relatively strong economic growth has only added to the positive animal spirits. In this "country world of the blind", the Rupee has naturally held strong against its counterparts in East Asia and elsewhere.

In other words, this strength of Rupee is a natural consequence of good macroeconomic policies, relatively high growth, boosted by the Central Bank's credibility, and amplified by economic weakness elsewhere. The RBI could not have engineered such persistent currency strength through open market operations in such choppy times. But its corollary has been erosion in trade competitiveness relative to its competitors, several of whom have benefited from significant depreciation.

It also underscores the point that a simultaneous pursuit of macroeconomic stability, high growth and depreciating currency may not have been possible in such times. In fact, may not be possible during most times in a closely inter-connected global economy.
Posted by Urbanomics at 8:06 AM