1. Ajay Shah has an excellent column examining the issue of unbundling of commercial activities,

Consider the New Pension System (NPS). Project OASIS, saw that the overall pensions problem contained three distinct industries: managing money, owning customers, and record-keeping. It suggested an unbundled architecture, where pension fund management was separated from interaction with customers. Record-keeping was centralised to harness economies of scale and ensure that it was easy for consumers to switch from one pension fund manager to another. This design caters to heightened competition. On the strength of better fund management, a new pension fund manager can steal customers, as switching is always possible. Similarly, the front end firms would live or die based on their friendliness to customers, and not on the quality of their fund management. In the conventional world, finance professionals generally focus on the deal-making required to get a new product to the customer. These finance professionals are a little shocked when, in the NPS environment, incumbent manufacturers do not control the distribution. All distributors are equally keen to push all products; all manufacturers have equal access to all distributors.

Though Shah sees unbundling as having worked in only NPS, electricity, and net-neutrality, I am inclined to cast the net wider. In particular, one could think of looking at many financial market activities in this way.

The only observation is that with the emergence of IT solutions, the entry barriers from an incumbent's entrenched presence in the downstream side of selling a service may not be as important as earlier.

2. The underlying signatures of Indian economy continue to remain weak. The capex index from IIP data comes in at the lowest since April 2010. 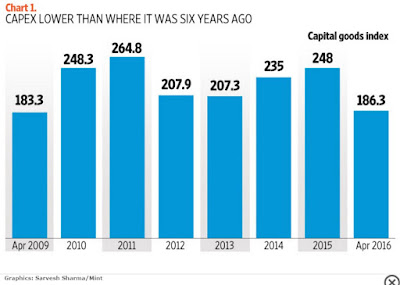 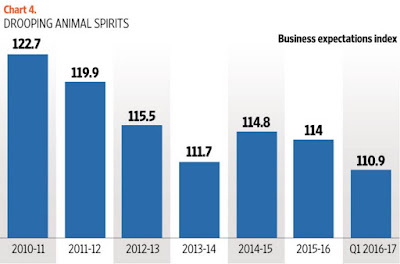 Much the same story about expectations on industrial production, order books, and job creation. Not a happy picture at all.

3. Mexico City's air pollution levels fall back to the nineties. This stat about its vehicle population is stunning,

Developers erect skyscrapers with a dozen floors reserved for parking. The Mexican Institute for Competitiveness, an economic think tank, estimates that 42 percent of space in new developments built between 2009 and 2013 was designated for parking.

4. Livemint points to BIS data for the 2007-15 period for 18 countries which finds that housing prices in India rose the highest at 72.3%. 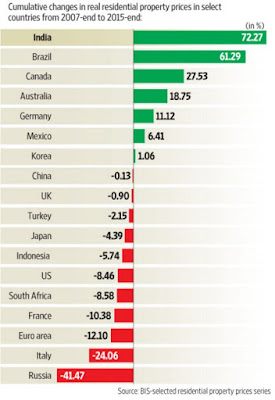 As the article points out, for whatever reason, housing market in India does not respond to over-supply and piling inventory by price corrections. Developers prefer to hold tight. It may just be that the margins are large enough (or supply small) to provide them the comfort to hold on to vacant units long enough.

5. Very good analysis of India's new Bankruptcy Code here. This is more likely to be an evolutionary process where the fruits will start appearing only 5-8 years hence. A very important reform though.

6. When in China Capitalists sing the Chinese tune! Consider the example of Disney. Disney opened its $5.5 bn Shanghai Disney Resort, its first facility in China, a joint venture with Shanghai Shendi Group. Times has a nice essay, which describes what Aswath Damodaran calls the "China trade-off",

In addition to handing over a large piece of the profit, the control-obsessed company would give the government a role in running the park. Disney was also prepared to drop its longstanding insistence on a television channel... Disney is sharing the keys to the Magic Kingdom with the Communist Party. While that partnership has made it easier to get things done in China, it has also given the government influence over everything from the price of admission to the types of rides at the park...

The partnership structure puts Disney in a complicated spot. Shendi is really a consortium of four powerful government-owned companies: the Shanghai Radio, Film and Television Development Company; Jin Jiang Hotels; Bailian retail shops; and a property developer, the Lujiazui Group. And each of those companies has separate business ties to Disney’s new resort. The Jin Jiang Group has a contract to provide tourism services for the park. The Lujiazui Group helped develop the world’s largest Disney Store. The Shanghai Media Group, a division of the development company, is positioned to capture a big share of the park’s television and advertising budget, since it controls the city’s biggest television stations, as well as major newspapers, magazines and radio properties.

7. Germany followed Japan and Switzerland into having its 10 year sovereign bond yield slip into negative territory. It is estimated that 40% of the $6.4 trillion Euro region debt is now trading below zero, which as one analyst said,

Nobody buys bunds at these yield levels thinking they are attractive. Demand for haven assets is being driven by fear of Brexit and growth concern. Investors are buying bunds as a hedge against uncertainty.

Another analyst had this to say,

Every day you own a bond like that you compound a loss, and the only way to make money is when someone else is willing to pay a higher price. As a store of value I don’t see it as a very good investment.

Former PIMCO head, Bill Gross has already described negative bonds as a "supernova that will explode one day". Since retail deposit rates have not become negative anywhere, the direct impact of negative rates is not being felt by citizens. Also, since yields have been continuously on the decline, prices have been rising and investors have been making profits.

8. More evidence that we may have reached "peak ship size". With 18% of world's container capacity anchored and idled, and global shipping capacity rising by 7% last quarter even as demand grew by 1%, the shipping industry is staring down the barrel,

A study last year by the OECD found that economies of scale from today's mega-boats are four to six times smaller than those in previous periods of up-sizing. Around 60 percent of cost savings now comes from engine technologies. In other words: Building smaller boats with better engines would offer more savings than going bigger. Then there's risk. Today's largest container vessels can cost $200 million and carry many thousands of containers -- potentially creating $1 billion in concentrated, floating risk that can only dock at a handful of the world's biggest ports. Such boats make prime targets for cyberattacks and terrorism, suffer from a dearth of qualified personnel to operate them, and are subject to huge insurance premiums.

Yet the biggest costs associated with these floating behemoths are on land -- at the ports that are scrambling to accommodate them. New cranes, taller bridges, environmentally perilous dredging, and even wholesale reconfiguration of container yards are just some of the costly disruptions that might be needed to receive a Benjamin Franklin and service it efficiently. Even when taxpayers foot the bill for such upgrades, the costs can be passed on to vessel operators in the form of higher port fees. In recent years, mega-vessels have caused traffic jams in the water and on-shore as overwhelmed ports struggle to offload thousands of containers. The expense in worker overtime and cargo delays can be significant. Making matters worse, the bigger ships make fewer port visits, leaving operators wondering if they should invest in costly renovations for what would amount to infrequent stopovers.

9. Business Standard chronicles Lavasa, the five-town smart city complex being developed independently by Hindustan Construction Company (HCC), on the foothills of the Western Ghats in Maharashtra. The project which was launched in 2004 and has so far incurred a cost of Rs 6600 Cr in the partial development of two towns (on 8000 and 2400 Acres respectively) follows the pattern of a very dense central core with sparse radial developments.

Despite the investments made, Lavasa continues to be largely a holiday destination with limited investments in services employment and other non-recreational commercial investments. Lavasa is a test case for the belief, which underpins a large part of Chinese urbanization, that "build it and they'll come". I am inclined to believe that Lavasa will be a success in the next 8-10 years and a great example for planned urbanization in India. And if that happens, the reasonable sizes of each development (a few thousand acres), will have had no small a role to play.

10. Finally, Goldman Sachs has been all over the news this week with two scandals. First, came news that Goldman Sachs advised the 2014 sale of BHS, the UK Department store chain, for £1 to Retail Acquisitions, a group of investors led by Dominic Chappell, an ex-bankrupt with no retail experience. Now with BHS with its 11000 odd employees facing bankruptcy amidst allegations of swindling and fraud, the ex-BHS chairman Sir Phillip Green has effectively blamed Goldman for clearing the sale to a person like Chappell.

If the first was not scandalous enough, the second would put even the most unscrupulous corporates to shame. The Libyan Investment Authority (LIA), the country's sovereign wealth fund (SWF), has initiated a $ 1bn suit for damages on Goldman at London. It accuses Goldman of exploiting its limited experience in 2008 to sell nine risky derivative trades that ultimately lost the SWF $ 1.2 bn, by using "undue" influence over LIA's own employees, including delivering the services of prostitutes and providing luxurious hospitality. Goldman is accused of using one of its executives, Youssef Kabbaj, to lobby and dine LIA officials concerned to purchase the products. The description of the trial here is downright lurid and despicable.

These come as Goldman is recovering from its role in raising upto $3 bn money for 1MDB, the Malaysian state fund at the center of a corruption scandal involving the country's Prime Minister. Goldman apparently received $300 m for this and $200 m for the LIA purchases.
Posted by Urbanomics at 7:42 AM

But then, corporations like to increase their profitablility and stronghold by vertical integration. Or to reduce friction in passing value to end customer.
It would best to eradicate bundling forced via policy/govt action though.