China, rest of the world, and free-trade

This blog has consistently argued that it is sound economic and, even more, sound politics to satisfactorily compensate the victims of international trade. A couple of weeks back, I had blogged about the need to acknowledge the legitimate concerns of the victims of global trends like trade and globalization. Dani Rodrik makes the same point here in the context of the debate on Trans-Pacific Partnership (TPP).

The Economist points to a new paper by David Autor, David Dorn, and Gordon Hanson which finds damaging effects on the US labor market from the massive growth of Chinese exports over the past two decades,

China’s emergence as a great economic power has induced an epochal shift in patterns of world trade. Simultaneously, it has challenged much of the received empirical wisdom about how labor markets adjust to trade shocks. Alongside the heralded consumer benefits of expanded trade are substantial adjustment costs and distributional consequences. These impacts are most visible in the local labor markets in which the industries exposed to foreign competition are concentrated. Adjustment in local labor markets is remarkably slow, with wages and labor-force participation rates remaining depressed and unemployment rates remaining elevated for at least a full decade after the China trade shock commences. Exposed workers experience greater job churning and reduced lifetime income. At the national level, employment has fallen in U.S. industries more exposed to import competition, as expected, but offsetting employment gains in other industries have yet to materialize.

The effects of the Chinese job sucking machine has been in line with the logic of Samuelson-Stolper hypothesis in depressing the wages of less-skilled workers in developed countries. For sure, over time the labor market adjustments will happen, but not before inflicting considerable pain and social instability in localized pockets. The costs have been enormous,

The authors found in a 2013 paper, competition from Chinese imports explains 44% of the decline in employment in manufacturing in America between 1990 and 2007. For any given industry, an increase in Chinese imports of $1,000 per worker per year led to a total reduction in annual income of about $500 per worker in the places where that industry was concentrated. The offsetting rise in government benefits was only $58 per worker. In a paper from 2014... focusing on America’s “employment sag” in the 2000s, the authors calculate that Chinese import competition reduced employment across the American economy as a whole by 2.4m jobs relative to the level it otherwise would have enjoyed.

For China though, the gains from trade have been remarkable, even unprecedented,

From 1991 to 2013 its share of global exports of manufactured goods rocketed from 2.3% to 18.8%... Average real income rose from 4% of the American level in 1990 to 25% today. Hundreds of millions of Chinese have moved out of poverty thanks to trade. 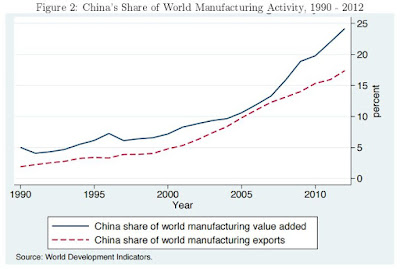 In this context, though not well documented, it is most likely that the Chinese imports have had a similar immiserating impact on labor markets across developing countries as it had on the US labor market. India's current Chief Economic Advisor Arvind Subramanian has been among those who have described "China’s exchange rate regime as a mercantilist trade policy whose costs are mainly borne by other developing and emerging market countries". Strip China out from the globalization balance sheet and the net effect may even be a slight negative.

It has therefore been one of the most unheralded Chinese foreign policy coups that it has managed to deflect attention from this profound reality and prevent the formation of any coalition of developing countries against its beggar-thy-neighbor trade practices. In some ways, Beijing's checkbook diplomacy has been spectacularly successful.

Update 1 (24.03.2016)
Eduardo Porter urges a more nuanced view on free trade and an acknowledgement of its distributional consequences.
Posted by Urbanomics at 6:00 AM

hello sir, that is indeed a very fair point. But by that logic, every person in the world will demand compensation due to globalisation. Is it not important for labour markets that are being adversely affected by an increase in Chinese manufacturing to adapt and innovate?