Even as the RBI delivered larger than expected rate cuts, its transmission remains a matter of concern. After immediately announcing a cut in its base rate by 40 basis points, the State Bank of India (SBI), the country's largest lender, has now decided to limit the reduction in new home loan rates to 15-20 basis points.

Their deeply stressed balance sheets naturally encourage banks to immediately pass on the cuts into deposit rates and limit the pass-through into lending rates, so as increase their net interest margins. A more fundamental reason is the nature of the bank liabilities itself. Unlike in the advanced economies and even the larger emerging economies, Indian banks are heavily dependent on bank deposits to finance their asset purchases. The graphic below shows the share of total deposits in the banks' total liabilities. 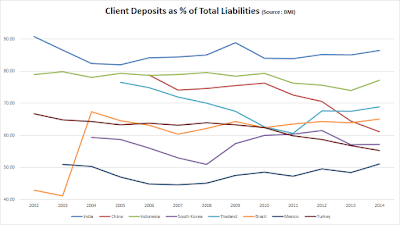 Clearly, deposits as a share of total liabilities is easily the highest in India among all large emerging economies. Since a significant share of deposits have interest rates locked-in, the banks ability to immediately reduce their cost of capital in response to the reduction in repo rate is constrained. In contrast, in the advanced economies, deposits make up just half of total liabilities, with the remaining coming from various types of borrowings, including inter-bank lending, which can be immediately swapped for lower cost borrowing once the central bank lowers the benchmark rate.

This also contributes to a wedge between the bank lending rate on the one hand, and long-term bond yields and the money market rates, which in turn gets transmitted across the fixed-income markets in general. 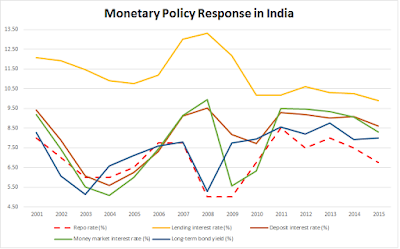 As can be seen from the graph constructed with EIU data, the wedge between the lending rate (here, taken as the SBI base lending rate) and the money market rate and 10 year government bond yields is considerable. Encouragingly, the wedge has been on a decreasing trend. It is therefore no surprise that short term commercial paper and similar instruments become more attractive for short-term borrowers following a central bank repo rate reduction.
Posted by Urbanomics at 7:00 AM

Excellent post, Gulzar. It is a good point but I presume it is also true that bulk of the deposits are not demand deposits but time deposits. If that is the case, then the case you had made becomes even stronger.

Thanx for raising that issue. The outstanding demand and time deposits as on 31.03.2015 were Rs7940 Cr and Rs 77393 Cr respectively, a ten-fold difference. Makes the transmission problem even greater...