1. More confirmation that India's middle class may be much smaller than originally thought comes from the latest Credit Suisse Global Wealth Databook 2015. It finds a middle class of just 24 million adults, less than a fourth of China. This is confirmed by findings of recent Pew survey, the Government of India's own socio-economic and caste census, and by the income tax assessee base. 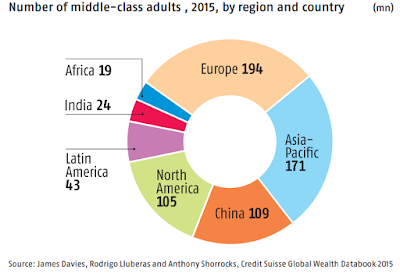 The report also finds disturbing trends on wealth dispersion, with the richest 1% and 10% Indians respectively owning 53% and 76.3% of the country's wealth, far more unequal than the US where the top 1% own 37.3% of the total wealth. 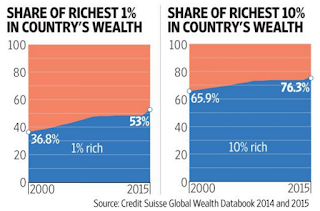 Highlighting the rapid widening of inequality, even as the national wealth rose by $2.284 trillion in the 2000-15 period, the richest 1% and 10% respectively claimed 61% and 81% of the increment.

2. More dismal news from Credit Suisse through the latest version of its status report on the debt levels of India's ten most indebted infrastructure firms. Their cumulative debt has risen seven-fold over the past eight years to reach 12% of all bank loans and 27% of all corporate loans, with debt levels rising for all the ten groups. Their interest cover dropped to 0.8 in 2014-15 from 0.9 in 2013-14, despite a significant share of interest being capitalized, and debt/EBITDA rose to 7. 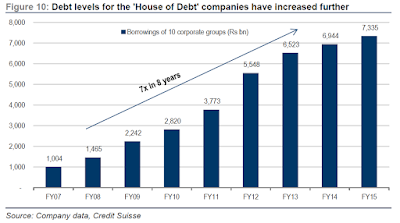 While the loans are standard in the bank books, 35-65% of the debt of four groups have been downgraded to default by rating agencies. In fact, the report points to auditor findings that 48% of the total debt, or $53 bn, was in some form of default, with $37 bn for 0-90 days and $16 bn for more than 90 days. It also estimates that 20-90% of the loans for some groups, aggregating to $48 bn or equivalent to declared banking sector gross NPAs, may be under severe stress. Taking all these into the count, the report estimates that the total NPA of India's banking system could be close to 17%. 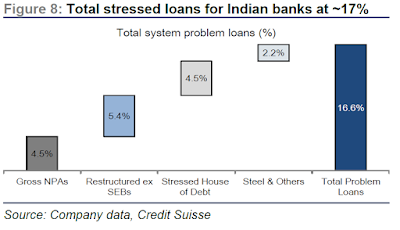 Some of the groups have sold away their better-performing assets to raise capital, leaving them with an even greater struggle to repair their balance sheets. Faced with such levels of balance sheet problems, these firms have cut back on capital expenditure by 20-70%. Most worryingly, many projects have 20-70% cost over-runs, thereby pushing capital costs beyond their pre-loss replacement costs and leaving the projects unviable.

It is most certain that many of these projects will have to be restructured with large haircuts and/or further equity infusions, maybe even public support. The aggressive traffic forecasts and tariff estimates that formed the basis of financial closure in road and power projects respectively may be impossible to realize. This coupled with the accumulated interest during construction and construction cost escalation may have made many projects insolvent. Any simple rescheduling of loans may be merely kicking the can down the road.

3. Rajan Govil joins those questioning the GDP growth numbers based on underlying indicators. He points out that nearly three-quarters of August's 6.4% annual IIP growth are explained by four items - gems and jewelry, insulated rubber cables, heavy commercial vehicles, and electricity - whose out-sized growth rates are simply unsustainable. He also points to the unabated trend of declining credit growth - non-food credit growth was 8.4%, and that to industry and services was 5-6%. 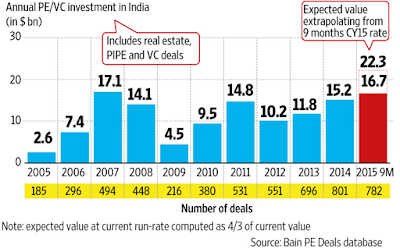 While this is an encouraging trend, its details need to be carefully parsed. Investments in consumer technology (e-commerce, aggregators, and other sharing economy firms), real estate, and financial services collectively made up 65% of all inflows and those into manufacturing is marginal. By its very nature, PE investors generally take positions in existing firms. A few large deals make up a disproportionate share of all PE investments - the top 25 deals made up 49% of 2014 PE investments. Finally, as the graphic below shows, the potential inflows from such sources is very small. 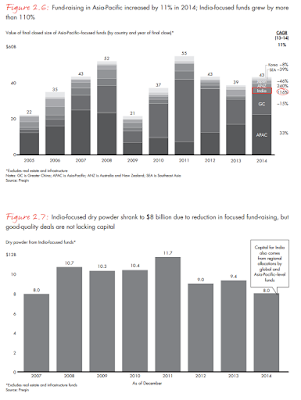 In any case, as I have blogged earlier, all such sources are a rounding error when compared to the country's credit needs, the overwhelming majority of which is met by the banking sector.
Posted by Urbanomics at 11:04 AM