1. One of the biggest concerns for the world economy is that the nearly two decades of high trade growth, spurred by trade reforms and technological advances, may nearing its end, as trade volumes have remained flat in recent years. 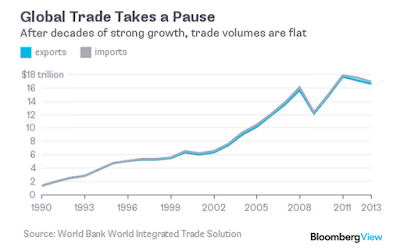 Manufacturing trade, which has been the escalator to prosperity for many developing countries in East Asia may have run out of steam. 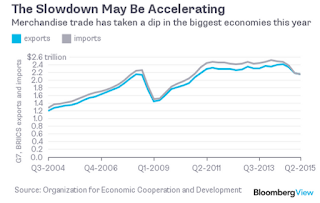 And this trend in manufacturing trade has been agnostic of regions. 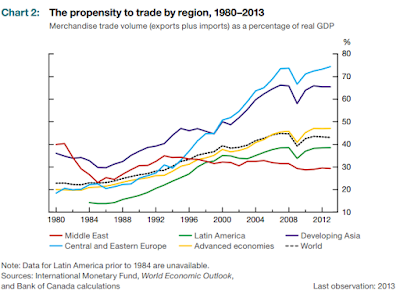 Both trends cause great concern for countries like India, which may have to increasingly rely on domestic markets as the engine for sustaining high economic growth rates.

2. There may be more bad news in store for world trade if this FT article is right. The conventional wisdom on competitive devaluation is that depreciating currencies improve external competitiveness, thereby boosting exports. But an FT analysis of 107 EM currencies and their respective trade volumes found that having a weaker currency not only did not lead to any rise in export volumes, but was associated with a decline in import volumes by about 0.5% for every percent a currency depreciated against the US Dollar. The FT writes,

Since June 2014, the currencies of Russia, Colombia, Brazil, Turkey, Mexico and Chile have fallen by between 20 per cent and 50 per cent against the dollar, while the Malaysian ringgit and Indonesian rupiah are at their weakest since the Asian financial crisis of 1998... Brazilian import volumes for the past three months, for example, are falling at a pace of 13 per cent year-on-year, according to estimates from Capital Economics, following a 37 per cent collapse in the real over the past 12 months. Russia, South Africa and Venezuela have also seen imports fall in the wake of plummeting currencies... This suggests emerging market countries can improve their current account balances by letting their currencies weaken, but only as a result of importing less, not exporting more, leading to a vicious cycle of falling global trade and an army of losers, but no winners... The findings may help explain the current weakness in global trade, with volumes falling 1.5 per cent in the first quarter of 2015 and 0.5 per cent in the second quarter.

3. This graphic captures much of the carnage that has happened in recent months following the plunging commodity prices. The depreciation, especially for commodity exporting EMs has been steep. 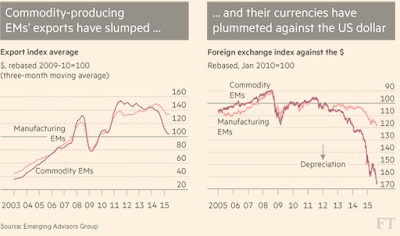 4. MR points to this fantastic interactive history, spanning four centuries, of a 486 ft block on Greene Street in New York. It comes from a study by William Easterly and Co, which draws attention to the importance of micro-level changes in determining the trajectory of its growth. While macro-trends deeply influences micro-changes, the emergent dynamics, often due to "spontaneous forces", between the local context and these macro-trends is what determines local growth. This is fascinating,

133 Greene Street, for example, has been part of the large Bayard farm, a grand residential home, a brothel, a garment factory, part of a slum, an art gallery, and is today the home of luxury co-op residences and a Dior Homme store. Many of these shifts took only a decade and could have been very difficult to anticipate.

5. As a flood of migrants from strife-torn parts of Africa and Asia flood Europe, causing over 2500 casualties in the Mediterranean in 2015 itself, the graphic below summarizes the scale of the problem in terms of the pending asylum applications, 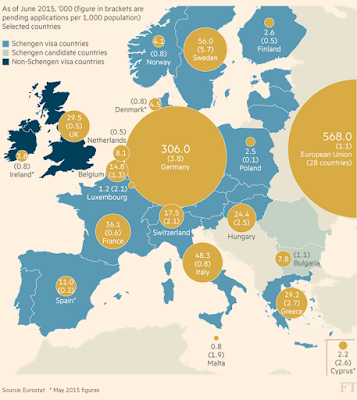 Germany expects to receive 800,000 asylum seekers this year, more than the rest of EU combined in 2014. The political leadership led by Chancellor Angela Merkel have taken a very balanced view, and even floated the idea of an immigration law, a clear legal avenue for non-EU migrants. Even more admirably, 60% of the population believes that the country could cope with high levels of refugees and 86% regarded Germany as a "country of immigration". 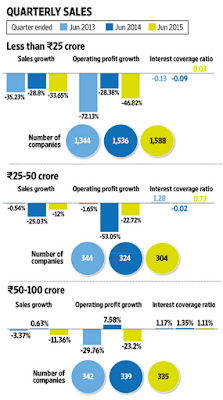 The situation improves dramatically as the firm-size increases. 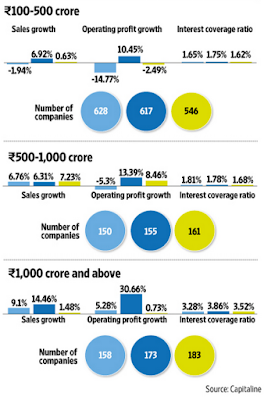 This underlines the point that MSMEs are the worst affected when the economic conditions weaken and domestic demand stagnates. Exacerbating the situation, SMEs are already squeezed out of the credit markets due to high interest rates.

7. Interesting story about the regulatory challenges facing the $63 bn Indian packaged food industry (China is $220 bn), which is estimated to reach $88 bn by 2019,

For decades, India had multiple government departments charged with preventing adulteration — which is rampant — of basic products such as milk and cooking oils. In 2006, India adopted a new food safety law with a broader agenda, including promoting healthy food. As part of the process, companies have been required to submit their exact recipes and formulations for official scrutiny. But industry has complained that the FSSAI decision-making process is both time-consuming and arbitrary, with products rejected on numerous whimsical grounds — including that they should be a different colour. India has fixed standards for only roughly 370 food items, compared with the 5,000 to 10,000 items common in developed markets. All other food items — except traditional Indian food — have been subjected to a controversial approval process in which regulators decide case by case whether to allow a food product or supplement to be sold in India.

8.  Is Charif Souki and his Cheniere Energy about to disrupt the fragmented global LNG market? Hitherto, even as the US is swamped with cheap shale gas, all of it has remained within the US boundaries and LNG prices elsewhere in the world have been ruling 2-3 times higher. Accordingly, LNG prices outside the US has been linked to the oil price, does not have spot markets, and can be procured only through long-term contracts.

The Cheniere Energy's Sabine Pass LNG terminal off Louisiana coast, with a capacity of 2.2 bcf/d, sought to be commissioned in December 2015 may be the first step towards an integrated global natural gas market. The firm proposes to sell 20% of its production through spot market deals. It is part of five LNG terminals on the Gulf Coast and East Coast, involving a capacity of 9 bcf/d that are likely to become operational by end of this year. Another 15 LNG terminal construction requests are awaiting approval. Integration of the US shale supplies can potentially lower prices and eliminate the current fragmentation of the global natural gas markets.

9. Rahul Jacob has an interesting take on India's internet start-ups,

Many Indian startups essentially "concentrate on eking out efficiencies, not creating new opportunities." Startups in India broadly have the mindset of private equity firms in developed economies who in essence are trying to work, say, steel and auto plants harder rather than build new ones. Most of the action is among aggregators of business (retail groceries, for instance, and taxis) rather than in new businesses. India’s poor record on job creation risks being perpetuated. The distressingly overladen delivery men for Flipkart and Snapdeal are numerous and polite, but it is hard to view these jobs as a new dawn for the Indian economy in the way that business process outsourcing and call centres were a couple of decades ago...

Startups that grow into large businesses such as Uber and Ola have, in fact, created thousands of new jobs, drawing people into the taxi driving profession who were earning much less doing other jobs as well as aggregating fleet taxi drivers who were under-utilised and underpaid. But, this is still not job creation on the order of the garment industry in Bangladesh, the assembly of iPhones in China or BPOs in India.

I am inclined to agree with Rahul Jacob on the job creation potential of such firms. Further, given that all of them are bleeding money big time in the pursuit of building a subscriber base, it remains to be seen how many of them stay afloat for long enough to start making money. In an extremely price-sensitive and small market like India, the 'subscribers' may prove too fickle to base your business case on.

But by lowering frictions in the markets for goods and services, market aggregators are undoubtedly contributing to improving the overall economic productivity besides expanding the market. Equally important, services like Uber, Ola, Magicbricks, and Housing.com serve to shrink the country's massive informal economy by formalizing transactions which are generally done in cash.

10. Finally, Paul Romer finds that urbanization passes the Lant Pritchett smell test for development interventions. He makes a graph which captures the urban share of population and GDP percapita (on a log scale) every 5 years from 1955-2010 for all year country pairs and finds a very strong positive correlation. But more interestingly, he finds an even stronger correlation for China during its high-growth years. 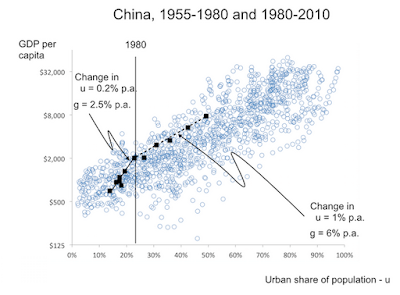 Apart from education, urbanization is the only other clear development intervention that always contributes to economic growth.
Posted by Urbanomics at 5:30 AM