Livemint writes about the struggles of steel sector in India,

The country’s consumption in April-March 2015 was at 76.3 mt, 3.1% higher from a year ago... in fiscal 2015, India imported 9.3 million tonnes (mt) of finished steel, 71.1% higher from a year ago, while it exported a mere 5.5 mt.... As of 16 April, Indian hot-rolled steel prices stood at Rs.39,681 per tonne or $627 per tonne. Prices of HRCs from China and Russia were significantly lower. According to Bloomberg, HRCs from China were priced at $387 per tonne. Even after adding shipping and transportation costs and export duty, the price added up to around $520 a tonne...Prices of Chinese flat steel products, which now meet the quality standards of established Indian companies, are usually 15% lower than Indian steel prices, thereby making imports very attractive... Russian prices were similar to those of Chinese imports for the past few months.

And this about the domestic steel industry's finances,

According to data from the Corporate Debt Restructuring (CDR) Cell, as on 31 March 2015, of the Rs.2.86 trillion in loans being restructured, 19.7% or Rs.56,443 crore worth of loans came from the iron and steel sector.

Apart from this, 41 steel sector projects worth Rs 4.6 lakh Cr formed 10% of all stalled projects being monitored by the Project Monitoring Group (PMG). In light of the above and the strong likelihood of the trends persisting, it is highly unlikely that too many promoters will be interested in taking forward these projects. These stalled projects may therefore be as good as cancelled.

In the quest for deleveraging, Indian corporates, including steel companies, are taking desperate measures. Livemint has another story about firms selling their core assets (mainly to infrastructure funds and infrastructure-focused leasing companies) and leasing it back through a 'sale-with-a-right-to-use' model. Firms sell the asset and enter into long-term contracts to use the equipments for their production. The deals mentioned in the story involve heavily over-leveraged firms, clearly revealing the motivating factor for such deals. However, while such sales help firms monetize non-liquid assets and reduce debt, especially important for debt-laden firms, they also raise operating expenses and thereby production cost. When deleveraging is completed, these firms are likely to face up to the reality of higher production cost and look for buying back the assets. But why should their new owners relent?

It makes very attractive commercial sense for investing in such assets. Given the assured incomes that come from the contracts, with minimal downside risks (albeit limited upside too), investors with patient capital like pension funds should be queing up. It is therefore no surprise that infrastructure funds and leasing companies and jumping into the market. But do these firms have the expertise to manage the operational risks? Or is is just another one of the fads that suddenly strike because of a market opening trigger (deleveraging by firms, here) for capital to rush in head-long and burn their fingers? Further, is the contracting likely to be clean, which minimizes the possibility of contracting disputes? Is it possible to effectively ring-fence asset-ownership and operational sides?

Fundamentally, this raises the issue of whether the Coasean bargain is attractive enough to pursue such a business model in manufacturing sector, one which has not gained traction even among the largest and most reputed manufacturing firms across the world. Does the profits from the production outweigh the transaction costs associated with manufacturing with leased assets? I am not sure.

Consider this. The leasing firm has locked-in production supply commitments made to long-term clients, from which they would be loath to renege. In contrast, the asset owner's incentives are far less strongly aligned towards ensuring such rigorous reliability. He does pay a penalty for reneging on contractual terms, but it is unlikely to be anywhere commensurate with the loss suffered by the manufacturer. Further, in order to limit disputes, a tighter ring-fencing of ownership and operation may, perversely enough, by making the owner a lazy rent-seeker, increase the cost for the operator and make his production commercially less viable. Or, is this another Indian jugaad business innovation model? 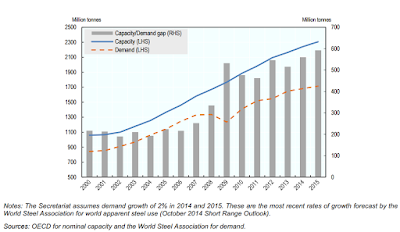 
At the end of the last financial year, the total debt outstanding to Indian steel companies was nearly $50 billion. This was nearly ten times the industry’s ebitda (profits before interest, taxes and depreciation are deducted), a good proxy for cash profits. Ebitda per tonne was just $63. Since then, Chinese steel prices have fallen, and are already almost $160 per tonne lower than the last financial year’s average. Costs for Indian companies are unlikely to fall meaningfully. Even without including interest costs, no Indian steel mill would be profitable without duty protection. This suggests pressure on debt-servicing. Even last year, when some interest costs on capacities under construction were not included, the average interest cost per tonne of production was nearly $50. This year it should be higher as those capacities get commissioned, and ebitda should be lower: The industry, as a whole, may not be able to pay interest on their debt.

Posted by Urbanomics at 8:57 AM