India and Bangladesh - the decoupling of economic and social development

WSJ has a nice graphic on Bangladesh's superior social sector achievements over its larger neighbor. 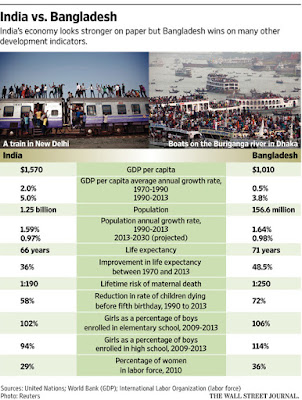 The limited literature available examining Bangladesh's relative success in improving social indicators point to the role of non-profits. But, as I blogged earlier, this may be a case of representativeness bias arising from the high-profile successes of non-profits like Grameen Bank and BRAC, and the consequent under-estimation of the role of government. Given the central role of public systems in the success of social sector policies, the performances of Bangladesh and India also points to the relative success of state in the former and its failure in the latter.

As India struggles with its Clean India initiative, Bangladesh's achievement in reducing open-defecation rate from 42% in 2003 to just 3% in 2014 looks mighty impressive. A less highlighted ongoing ADB funded project is soon set to make Dhaka the first South Asian city to have a functioning 24X7 water supply system. What is it about Bangladesh's public administration and political economy that enhances its state capability?
Posted by Urbanomics at 9:14 PM