In lamenting Japan's struggles with deflationary stagnation, we overlook the dramatic demographic shifts the country has undergone in the past two decades.

Its working age (15-64 ages) population dropped sharply from about 87 million in 1998 to about 77 million in 2013. This 12% drop in its primary factor of production over just 15 years is remarkable, considering its strong downward pressure on economic output. 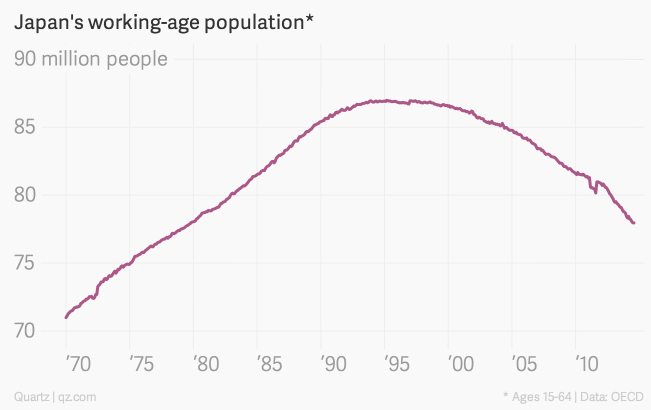 This was accompanied by a 35% appreciation of the currency, with attendant consequences on a heavily export-dependent economy. If we take both this into account, instead of being concerned, we ought to be surprised at the economy's resilience.

Clearly, the Japanese have been successful in squeezing more out of its remaining factors of production. Further, successive Japanese governments should be complimented for having avoided the public suffering that accompanies such prolonged slowdowns. In fact, as Krugman has written, Japan's real GDP per working age adult has risen faster than others since the Great Recession. 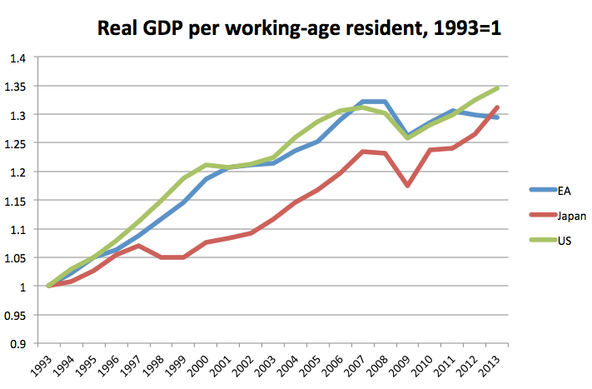 One possible way out of this is to liberalize immigration rules and nudge the country into being more open to migrants. This could be the fourth arrow of Abenomics. But that looks some time away since we are still awaiting the third.

Japanese government debt now stands at more than 230% of GDP, and at about 140% even after deducting holdings by various government-related entities, such as the social-security fund...  For Japan to pay down its net debt even to 80% of GDP by 2030, it would have to turn a 6%-of-GDP primary budget deficit (before interest payments on existing debt) in 2014 into a 5.6%-of-GDP surplus by 2020, and maintain that surplus throughout the 2020s. If this was attempted, Japan would be condemned to sustained deflation and recession...

Instead of being repaid, the government's debt is being bought by the BOJ, whose purchases of ¥80 trillion per year now exceed the government's new debt issues of about ¥50 trillion. Total debt, net of BOJ holdings, is therefore falling slowly. Indeed, if current trends persist, the debt held neither by the BOJ nor other government-related entities could be down to 65% of GDP by 2017. And because the government owns the BOJ, which returns the interest it receives on government bonds to the government, it is only the declining net figure that represents a real liability for future Japanese taxpayers...

That reality is not yet openly admitted. The official doctrine is that the BOJ eventually will sell back all of the government bonds that it has acquired. But it need not do so. Indeed, the BOJ could maintain its current level of government-debt holdings indefinitely, making new purchases as existing bonds mature. And if the money created – in the form of commercial bank reserves at the BOJ – ever threatened to support excessive credit growth and inflation, the BOJ could offset that danger by imposing reserve requirements on the banks.

Posted by Urbanomics at 6:13 AM