As India's economic prospects improve, euphoric voices like this about the possibility of double-digit economic growth rates are bound to rise. But such speculation, anchored around the memories of China's spectacularly long period of double digit growth and our own brief interlude with similar growth last decade, overlook the presence of very strong headwinds.

In this context, the work of economists like Dani Rodrik and Arvind Subramanian cautions against such excessive hope and speculation. Three arguments are worth examining.

1. Apart from favorable domestic conditions, the long period of East Asian economic growth, whose salience is amplified manifold by China's rise, benefited from a happy confluence of benign external conditions. This period of unconditional convergence coincided with favorable geo-political dynamics (the US provided geo-political stability, which also relieved E Asian economies from spending on defense), high-noon of globalization facilitated by sharp fall in tariffs and un-bundling of global manufacturing supply chains, rapid emergence of trade facilitating technologies like containerization and ICT, a receptive consumer market in US and Europe, availability of abundant cheap domestic and global capital, and so on.

These trends are either considerably attenuated or have run its course. But all narratives of India's high growth prospects are significantly predicated on the continuation of these conditions. Furthermore, there is the strong likelihood of technological disruption of the labor market due to increasing automation and resultant disemployment. While these forces are not likely to immediately bind in any significant manner in countries like India, their potential to disrupt global manufacturing and thereby global labor market, is considerable and deeply uncertain. These are first order headwinds that the Indian economy will have to surmount in its quest for growth comparable to what the East Asian economies sustained for long periods. 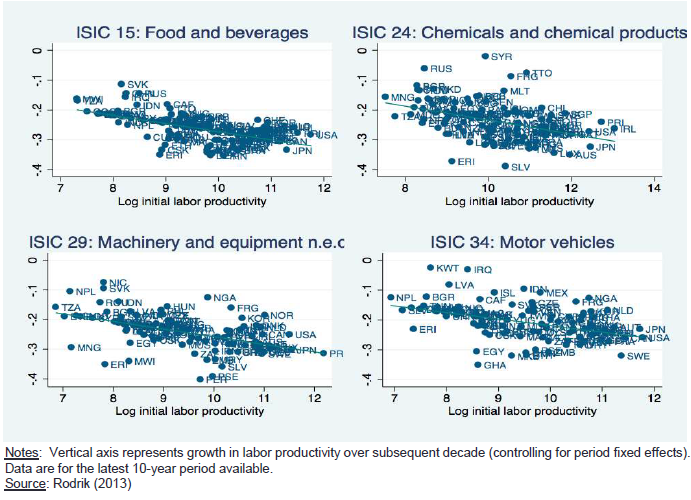 This feature of manufacturing sector helps absorb large number of less skilled labor, with prospects of moving up the skill chain on the escalator of industries. But, as Prof Rodrik and others argue, such manufacturing sector growth may be constrained by the weakening of the aforementioned favorable forces. They characterize it as "premature de-industrialization".

Such de-industrialization, observed in the development trajectories of all advanced countries, appears to be happening much earlier among the emerging economies. In India, manufacturing's share of output has been stagnant at about 14-16% of GDP for nearly four decades and its share of employment peaked at 13% of labor force in 2002 and has since been trending downwards. As the graphic below shows, this feature has been true of even many East Asian economies, including China, who have started de-industrializing earlier than their western counterparts. 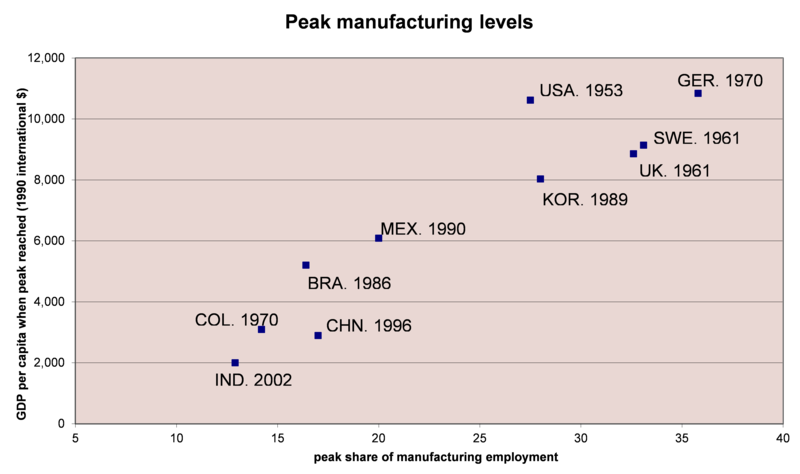 As can be seen, India started de-industrializing at a GDP per capita of $2000, in contrast to the $9000-11000 income levels at which manufacturing in western economies started decline. In fact, as the graphic from cross-national panel data below by Arvind Subramanian shows, at any stage in their development, not only are countries devoting less workforce to industries (the downward shift in the curves) but also the point of time at which industrial share of employment peaks is happening earlier (leftward shift in the curves). 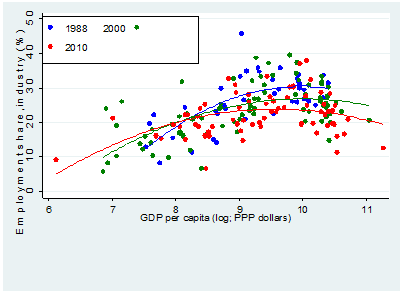 This potentially dampens the prospects for manufacturing led rapid growth for countries like India and Africa.

3. In all the East Asian economies, the de-industrialization has been accompanied by proportionate growth in the services sector, "making them service economies at substantially lower levels of income". This has led to some commentators pointing to the potential for a new model of services led economic growth. The example of India's successful IT sector has often been cited in support of this, though an a cursory empirical analysis would reveal this as misleading, given its small size and limited relevance to India's overall economic growth.

Prof Rodrik's argument, brought out also in this article, is that the inherent dynamics of services sector militates against generating similar growth and job creation trends as with manufacturing. The graphic below shows that there are very few examples of simultaneous growth of both productivity and employment.

The high-productivity sectors, which are typically tradeable, being skill-intensive, cannot absorb much of the not so skilled workers who dominate the 12 million or so people entering India's workforce every year. In fact, as the graphic below from Arvind Subramanian shows, the more productive and therefore rapidly expanding (and mostly tradeable) services are also highly skill-intensive, far more than manufacturing. 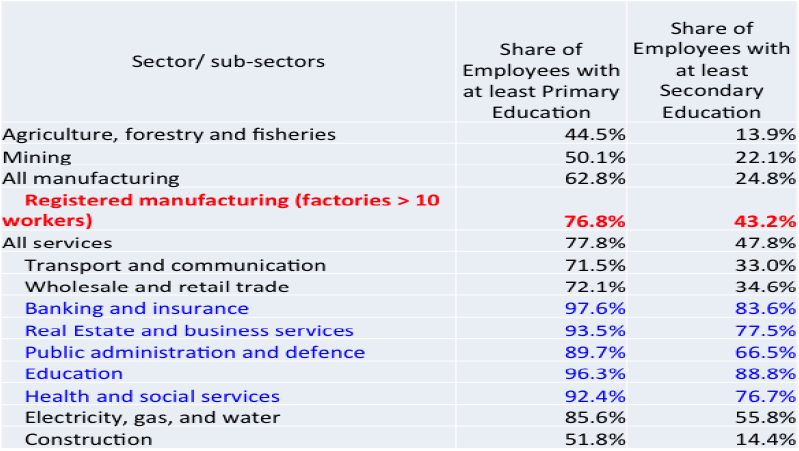 Further, unlike manufacturing, there is limited prospects for natural progression up the skill chain in services sector. While a textile or toy maker can with minimal training migrate into assembling electronic goods, the prospects of a barber or housekeeper moving into business services or banking, even at the lower end of that service, is remote or non-existent.

India's woeful deficiencies in education and skill development would certainly come in the way of it being able to reap the benefits from tradeable services in any significant manner. It would require atleast more than a decade of intensive focus on education and skill development for the country to realize more substantial benefits from tradeable services. And even then, like with manufacturing, there are significant uncertainties over the possible disruption to parts of the services sector, especially at its labor-intensive lower end, from technological advances.

To conclude, global political, economic, and technological environment is undergoing important shifts. The traditional get-rich-quick route of escalator industries looks increasingly out of bound. And the prospect of services becoming the new rapid growth sustaining platform does not appear promising. In the circumstances, India and others will have to navigate against the combination of all three headwinds in their quest to attain high economic growth rates.

In case of India, its preparedness - poor quality of human resources and pervasive weakness in state capability - constrain the country's ability to overcome these headwinds. The shackles imposed by restrictive regulations exacerbate our weaknesses, further limiting the ability to achieve high growth rates and sustain it for prolonged periods. With business as usual, given its massive size, even with all these internal weaknesses and headwinds, the country may grow rapidly in short bursts (as happened for a few years in last decade) interspersed with longer moderate growth periods.

Sustaining very high growth rates for long periods like East Asia would require large-scale and long-drawn reforms in numerous areas coupled with concerted efforts to improve human resource capacity and state capability. Even if the reforms are initiated with vigour, it is unlikely to result in any dramatic gains in the short or medium-term. This, rather than cognitive biases, should form the basis for any examination or speculation on the country's long-term growth prospects.
Posted by Urbanomics at 1:03 PM