Deepening and broadening of capital markets, in particular debt markets, have been at the top of the agenda for developing countries for many years now. But global experience does not appear promising, a throwback to the original sin hypothesis.

As can be seen, non-financial businesses form a very small share of total national debt. More prominently, government debt takes up nearly half the share of debt in both India and Brazil, thereby lending credence to the crowding-out hypothesis. India's non-financial debt market has been growing in recent years, though government dominates the market. 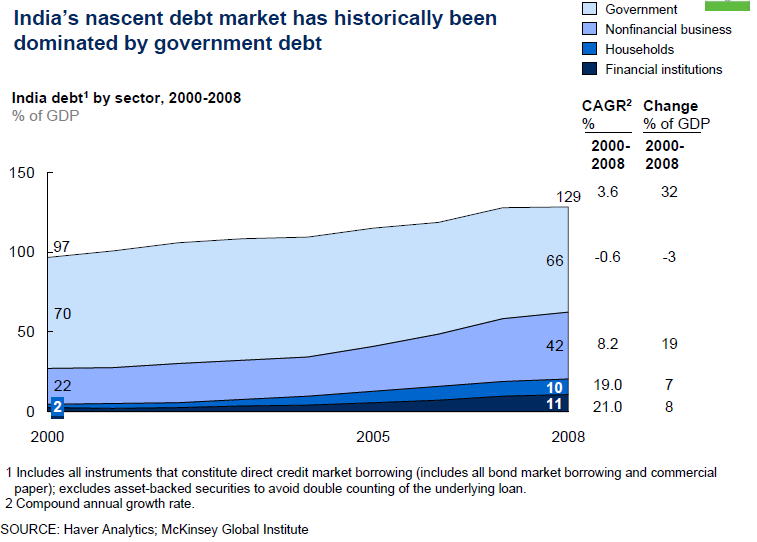 The depth of global financial markets varies widely between developed and developing countries. It is in the range of 400-500% in developed economies, whereas it is in the range of 100-250% in emerging economies. However, in these emerging economies, the share of non-financial corporate debt and securitized loans is minuscule. For example in India, of the 42% of non-financial debt, just 4.8% (or 2% of GDP) is held as long-term bonds. It is no different in China, where while non-financial debt forms 96% of GDP, just 4.1% is held as long-term bonds. In fact, even in Latin America where most countries undertook big-bang capital market liberalizing reforms and put in place state of art regulation, non-financial bonds were just 2% of  GDP. 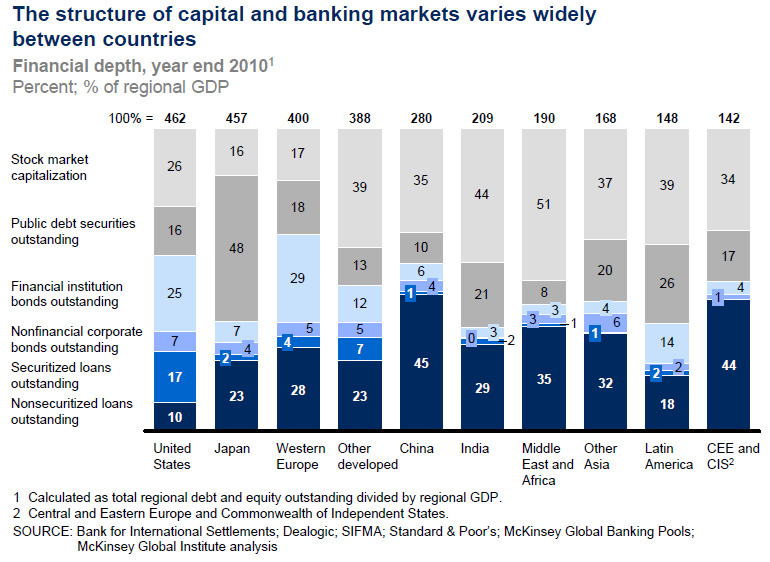 Globally, the rapid growth in financial stock since 2000 has been led by growth in equity markets, public debt securities, and financial institution bonds. The share of non-financial corporate bonds is relatively small and concentrated mostly in US and Europe. 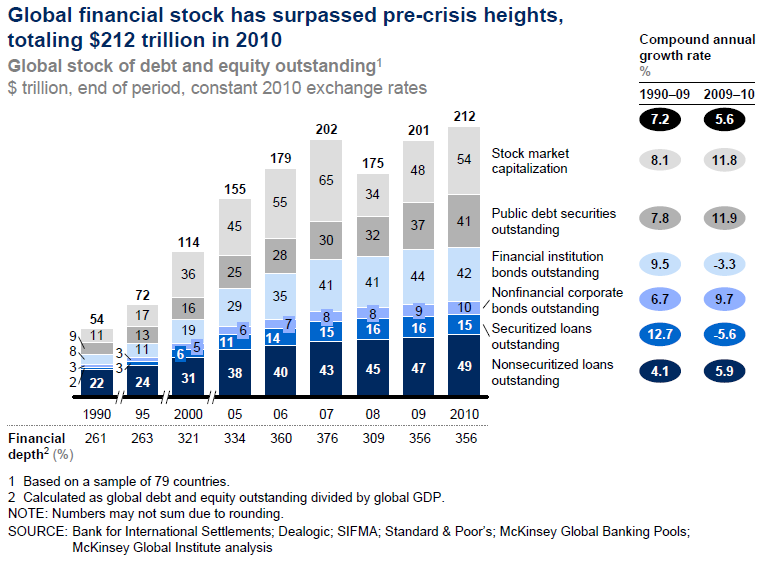 Clearly, as the graphic shows, there is enormous potential for financial markets deepening across developing countries. 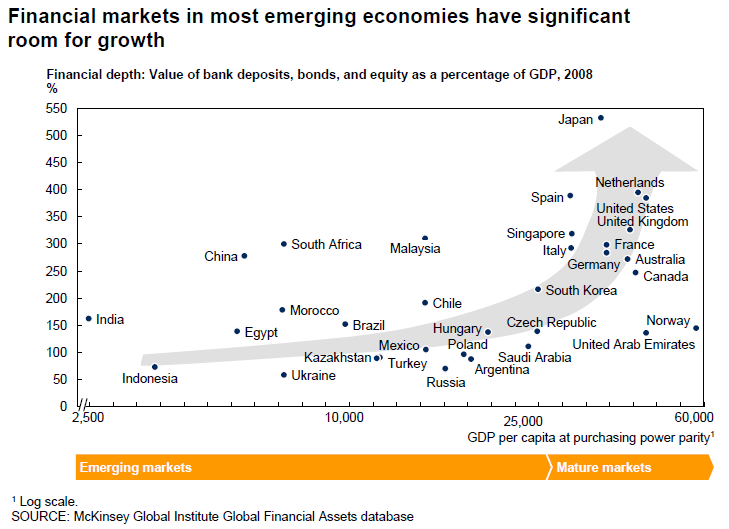 Indian corporates remain overwhelmingly dependent on banks and internal resources for capital mobilization. The share of corporate funding that came from internal resources remain elevated
at 30.8% in 2010-11, just down from 35.8% in 2000-01. In fact, new equity has fallen from 17.2% to 13.8% in the same period. More interestingly, the share of corporate bonds has hardly moved from 3.5% to 3.9%, a far lower than the 17% in China.

Despite the wave of financial market liberalization and the resultant surge in capital mobilization, domestic and foreign, private debt securities markets have remained relatively small. This is stark contrast to the rapid growth in equity markets and bank deposits. 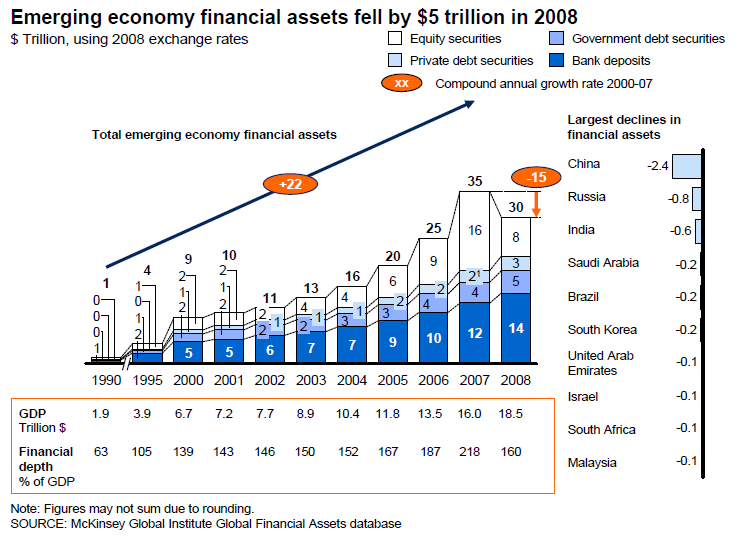 In fact, globally too capital markets have remained elusive everywhere except the US. Globally, equity and bank loans have dwarfed long-term bonds as sources of infrastructure finance. 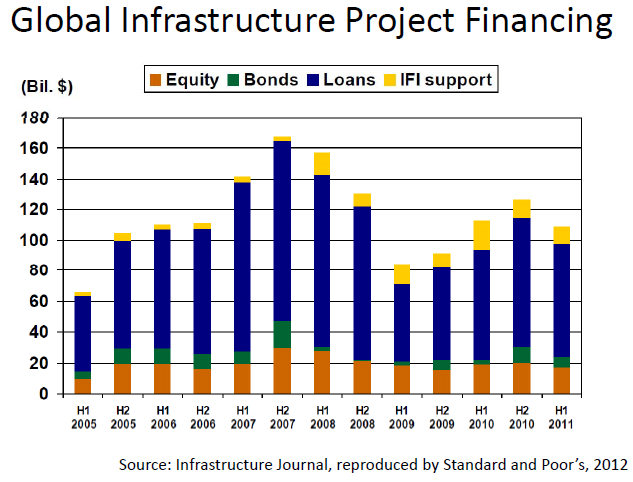 This trend is evident across Asia, Europe, Middle East, Africa, and Latin America. Only in US and Canada, do capital markets assume a significant share. 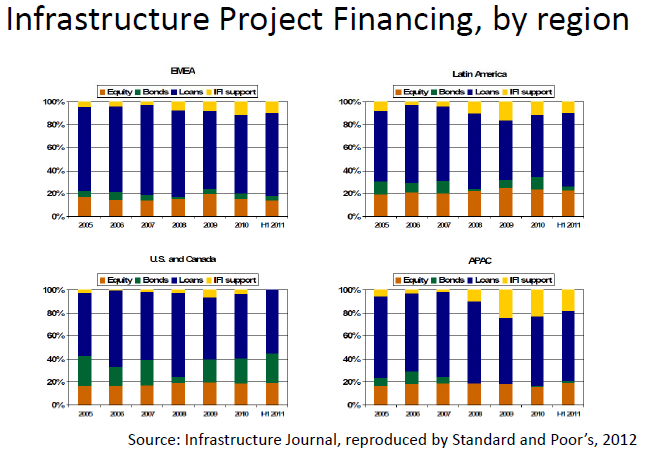 Does this mean that the quest for development of long-term bond markets is not a very realistic one? If so, where does the capital for financing infrastructure projects come from?
Posted by Urbanomics at 7:30 PM