Late on this insightful paper on global inequality by Branko Milanovic. This graph of change in real incomes among people at various percentiles of global income distribution in the 1988-2008 period has received considerable attention.

About the winners and losers from this period, he writes,


The top 1% has seen its real income rise by more than 60% over those two decades. The largest increases however were registered around the median: 80% real increase at the median itself and some 70% around it. It is there, between the 50th and 60th percentile of the global income distribution that we find some 200 million Chinese, 90 million Indians, and about 30 million people each from Indonesia, Brazil and Egypt. These two groups—the global top 1% and the middle classes of the emerging market economies— are indeed the main winners of globalization...

But the biggest loser (other than the very poorest 5%), or at least the “non-winner,” of globalization were those between the 75th and 90th percentile of the global income distribution whose real income gains were essentially nil. These people, who may be called a global upper-middle class, include many from former Communist countries and Latin America, as well as those citizens of rich countries whose incomes stagnated.

The paper has a very interesting representation of the progress made by some emerging economies...


In 1988, a person with a median income in China was richer than only 10% of world population. Twenty years later, a person at that same position within Chinese income distribution, was richer than more than one- half of world population. Thus, he or she leapfrogged over more than 40% of people in the world. For India, the improvement was more modest, but still remarkable. A person with a median income went from being at the 10th percentile globally to the 27th. A person at the same income position in Indonesia went from the 25th to 39th global percentile. A person with the median income in Brazil gained as well. She went from being around the 40th percentile of the global income distribution to about the 66th percentile. Meanwhile, the position of large European countries and the United States remained about the same, with median income recipients there in the 80s and 90s of global percentiles.

.... and the losers in Africa, Latin America, and East Europe,


So who lost between 1988 and 2008? Mostly people in Africa, some in Latin America and post-Communist countries. The average Kenyan went down from the 22nd to the 12th percentile globally, the average Nigerian from the 16th to 13th percentile. A different way to see this is to look at how far behind the global median was an average African in 1988 and twenty years later. In 1988, an African with the median income of the continent had an income equal to two-thirds of the global median. In 2008, that proportion had declined to less than one-half. The position of a median-income person in post-Communist countries slid from around the 75th global percentile to the 73rd. The relative declines of Africa, and Eastern Europe and the former Soviet Union confirm the failure of these two parts of the world to adjust well to globalization, at least up to the early years of the 21st century.

Another interesting insight is the increased contribution of location or citizenship on people's income determination. He writes,


More than fifty percent of one’s income depends on the average income of the country where a person lives or was born (the two things being, for 97% of world population, the same). This gives the importance of the location element today. There are of course other factors that matter for one’s income, from gender and parental education which are, from an individual point of view externally given circumstances, to factors like own education, effort and luck that are not. They all influence our income level. But the remarkable thing is that a very large chunk of our income will be determined by only one variable, citizenship, that we, generally, acquire at birth. It is almost the same as saying, that if I know nothing about any given individual in the world, I can, with a reasonably good confidence, predict her income just from the knowledge of her citizenship... Around 1870, class explained more than 2/3 of global inequality. And now? The proportions have exactly flipped: more than 2/3 of total inequality is due to location. 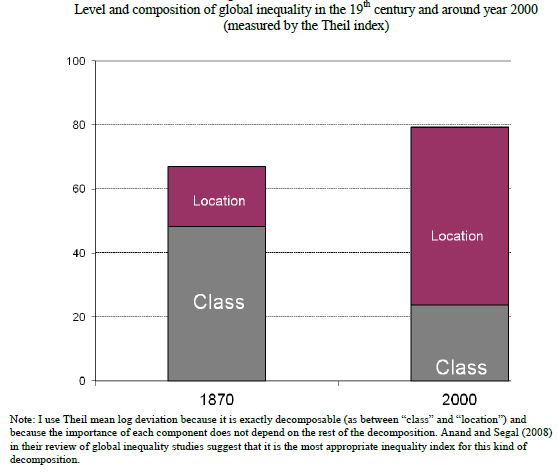 Finally, the paper also captures the differences in economic positions of people from different countries. It divides the population of all countries into groups of 5% or ventiles and maps their position in the global income distribution. 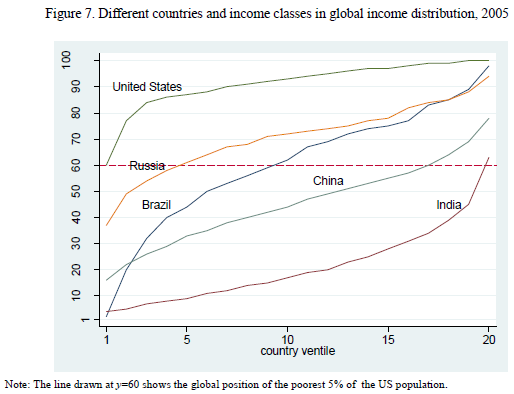 Update 1 (2/1/2014)
The International Business Times has this nice graphic of the changes in global inequality.

Posted by Urbanomics at 8:21 PM