It is now widely acknowledged that economies, howsoever strong their fundamentals, cannot remain insulated from negative global economic shocks. In simple terms, this means that irrespective of the domestic strength and size of an economy, adverse global economic events have the potential to generate macroeconomic distortions that can destabilize the economy. A fundamentally strong economy can, in quick time, become a victim of global economic events for essentially no fault of its.

Floyd Norris highlights the latest example of an economy, Switzerland, that appears to be falling victim to a crisis that it had no role in fuelling. As the Eurozone crisis progressed, investors searching for safety found in Switzerland and the Swiss franc an attractive safe haven. The country had stayed away from the Eurozone, had deep financial markets, and reasonably strong economic fundamentals.

Capital flowed in massive quantities, driving up the Swiss franc which appreciated spectacularly from its long-term stable value of around 1.4 francs to a euro to almost being on par with the euro. The Swiss central bank responded by publicly committing to not let the franc fall below 1.2 to a euro. It undertook massive purchases of euros, accummulating huge euro reserves. It also lowered Swiss interest rates to nearly zero. But despite all this, the Swiss economy has not been able to stave off the effects of the capital inflows. The declining external competitiveness has driven down exports, a consumption boom has been triggered, and a real estate bubble is rapidly inflating. 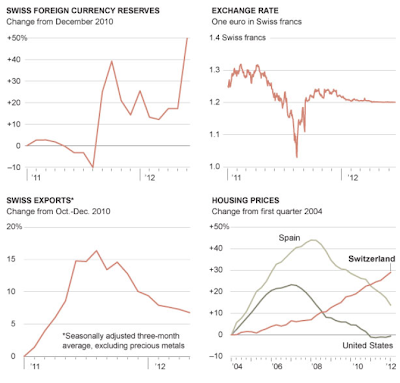 One cannot but not wonder whether Switzerland is actually paying a penalty for running its economy reasonably well! In many respects, Switzerland is facing the same challenges which many of the peripheral Eurozone economies, albeit with much less strong fundamentals, faced when they experienced a massive capital rush, again for different reasons, in the aftermath of the currency union.

As I have blogged earlier, the crisis in countries like Spain and Ireland is not the result of government fiscal profligacy but of Eurozone-wide macroeconomic forces unleashed in the aftermath of the monetary union. These countries, with relatively strong economic fundamentals, experienced a sudden and sharp lowering of borrowing costs and massive capital inflows, both of which led resource misallocation distortions and imbalances.

All this once again highlights the importance of macroeconomic regulatory oversight in a globalized economy. If, some years down the line, Switzerland is forced to confront an economic crisis triggered off by a real estate bubble and its attendant larger macroeconomy and financial markets distortions, several questions will be asked about what the Swiss government could have done to avoid the fate. This becomes all the more so since, if that happens, it would be virtual repeat of the problems currently being faced by the peripheral economies.

In the circumstances, should Switzerland enforce some form of regulatory capital controls as it faces the massive inflows of foreign capital? It is interesting that one of the flagbearers of capitalist democracy, the International Monetary Fund, has already lend its imprimatur to some form of regulatory restraint on capital inflows so as to ensure economic and financial stability.

In fact a recent working paper by Marie-Aimée Tourres points to the success of India and China with use of capital controls to curb dangerous capital flows. She argues that "capital controls help to provide short-term monetary policy independence within the impossible trinity and that long-standing capital controls is possible leading to a mid-way path". I cannot but not be in greater agreement.
Posted by Urbanomics at 6:46 AM