If inflation dominated economic policy debates for most of the past three years, it is slowly giving way to the alarming depreciation in the value of rupee as the dominant agenda in debates about Indian economy.

The Indian rupee has lost nearly 27% value in the past ten months, rivalling the country's worst ever devaluations. For sure, this has been accompanied by dismal figures on just about every other macroeconomic indicator. The just released 2012 first quarter growth figure of 5.3%, the lowest in nine years, is only the latest in the series of disappointing numbers. 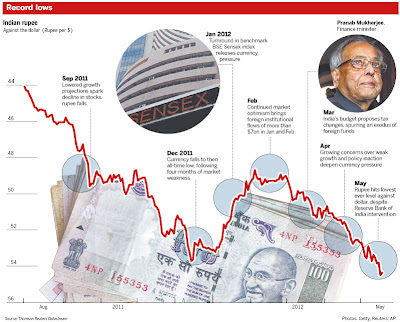 In an excellent op-ed Shankar Acharya recently laid the blame for Rupee's troubles squarely at the doorstep of the government. He has blamed retrograde policies, policy flip-flops, inaction in sectors like mining, wasteful expansion of subsidies, and failure to de-bottleneck constraints in infrastructure sector. He also argues that the last Budget may have been a decisive signal to investors about the regression, with its retrospective taxation proposal and little by way of credible measures to tackle the yawning fiscal deficit.

In a way, the rupee's correction beginning August 2011 was expected and desirable. As the figure below indicates, the rupee had appreciated considerably during the March 2009 to July 2011 period, despite widening trade and current account deficits (CAD). Therefore the depreciation of the past year has been an attempt to reverse the CAD. And to this extent, the rupee will continue to remain weak and even fall further, unless steps are taken that will signal a commitment to reduce the CAD. 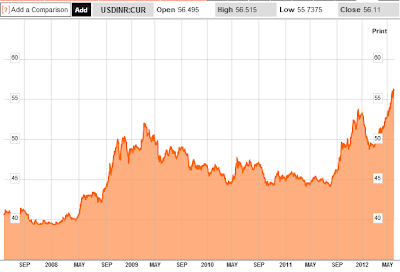 There is an inflation dimension too to the rupee's travails. In a recent op-ed, Jahangir Aziz highlighted the direct linkage between India's persistent high inflation rate and depreciating exchange rate. He writes,


Since 2000, India’s GDP relative to its trading partners has risen around 65 per cent. As it happens in most countries, this led to a 15 per cent appreciation in the real value of the rupee. This should have led to a nominal appreciation. Instead the trade-weighted nominal value of the rupee has depreciated 25 per cent! The reason? You guessed right, it is India’s inflation. Since 2000, prices in India relative to its trading partners have risen an astounding 60 per cent. And as long as India’s inflation does not come down substantially, the rupee will continue to weaken just to keep growth, inflation and the real exchange rate in balance.

In other words, instead of nominally appreciating, in keeping with the relative economic growth trends, the high inflation led to the nominal depreciation.

Apart from domestic factors, there is also global risk aversion. Spooked by the Eurozone crisis, investors have been fleeing from emerging economies to the safety and liquidity of US and German government securities. In fact, the graphic below shows that most of the major emerging market currencies have moved lock-step in tandem. It does not reveal that India has suffered anything dramatically worse than its BRICS peer group. 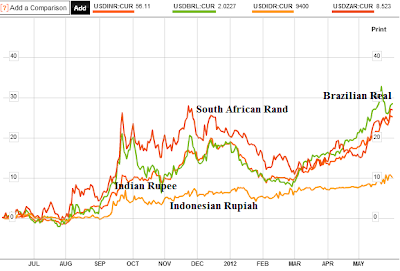 However the magnitude of the correction goes beyond that warranted to remedy the CAD or to adjust for the high inflation or even global risk aversion. A more credible explanation would point to the role of macro-governance failures in driving rupee this low. The forex market bears have piled into India with some vigour and driven the rupee further south than would the economic fundamentals alone would have demanded. But then, as I blogged earlier, this is an inevitable result of the globalized economy we live in and something our political establishment will have to factor in when they debate and decide on economic issues.

Unfortunately, India has not been able to capitalize on rupee depreciation due to its ballooning import bill. Weak rupee, while making exports more competitive, also has the effect of squeezing imports, thereby contributing to lowering the deficit. However, in India's case, oil imports have been inelastic to the rising global energy prices. The high oil and gold prices and record imports of both commodities have played a major role in raising India's trade deficit for 2011-12 to a record 9.9% of GDP and CAD to a very high 4% of GDP. The FT summed up the reasons for India's external imbalance

The declining flow of foreign capital and portfolio investments in recent months coupled with RBI's open market operations to stabilize the rupee has depleted India's foreign exchange reserves. While India’s foreign currency reserves are comfortable and can cover about six months of the country’s current account payments, it is down from eight months in 2008 and 2009. And such continuing trend of declines can spook the markets.

In any case, the silver lining in the depreciating rupee is the promise it offers to exporters. The rupee's depreciation, coupled with the steady appreciation of the renminbi, as Business Standard wrote in a recent editorial, means that over the past year Indian products have become 60% more competitive than Chinese exports. This presents great opportunities for Indian manufacturers to seize the moment and launch a sustained effort to grab global market shares in manufacturing. A big bang effort by the government, with some important policy reforms to revive animal spirits, could provide the trigger to get the investment tap open and flowing.
Posted by Urbanomics at 6:18 AM