"Twisting" on debt maturities as QE3?

The latest dimension to the US Federal Reserve's attempts to lower long-term interest rates through its quantitative easing (QE) program is "Operation Twist". It involves selling short-dated Treasuries (1-3 years) and buying longer-term securities (mostly 7-10 years) in an attempt to push down longer-term yields. These yields affect corporate borrowing and mortgage rates far more than short-term rates.

Hitherto, in the two rounds of QE (QE1 in 2009 was for $750bn, measured in 10-year Treasury equivalents, and QE2 in 2010 was for $412bn), lowering of long-term rates was sought to be achieved through massive purchases of long-term securities. This has involved a huge expansion of the Fed's balance sheet, though the resultant increased monetary base has been mostly confined to banks' reserves. This expansion of monetary base has generated criticism about stoking inflationary fears, weakening the dollar, and spawning other systemic distortions. It has also come in the way of another round of QE.

The new strategy avoids expanding the Fed's balance sheet and seeks to lower long-term rates by swapping short-term debt for longer-term ones. This would not involve any additional balance sheet expansion and would only cause maturity transformation of existing debt portfolio towards the longer-term. In simple terms, it would be merely re-balancing the Fed's portfolio.

It is estimated that by merely "recycling maturing bonds into longer-dated ones", $110bn would be added, and by "actively selling its portfolio of 1-3-year bonds and buying as much long paper as permitted", the Fed could achieve another $390bn. The former involving about $20 bn a month may not enthuse the markets as much as the later which could involve more than $65 bn a month. The Fed at present owns $632bn in Treasuries with a maturity of less than four years. See this Goldman estimate of Fed's possible Operation Twist strategy. 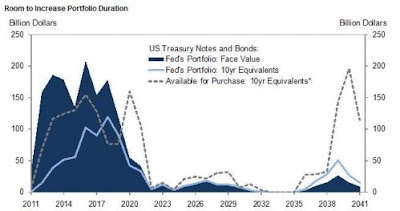 Twisting of the yield curve is not without precedents, though its impact has not been encouraging. It was first used, unsuccessfully, by the US in 1961 and then by Japan, again unsuccessfully, in the nineties. It carries with it certain clear risks. As the FT writes, it "could disrupt trading flows in the bond market, while reducing earnings for banks that borrow cheaply and invest in long-term Treasury debt". It would adversely affect the returns of institutions like insurance companies and pension funds that have large exposure to long-term debt instruments and also the net-interest margins of banks (who invest in long-term bonds).

Finally, it also increases the long-term interest rate risk in the Fed's portfolio, which could, at certain point, constrain the Fed's policy making freedom. Fed would then effectively become a player in the bond markets. And there also exists the probability of making considerable losses when the Fed exits from its current accommodatary stance. It is also being argued that speculation of Operation Twist has already been priced into long-term yields and not much will be achieved with the actual operations.

The Fed announces that it would invest $400 billion in long-term Treasury securities over the next nine months, using money raised by selling its holdings of short-term federal debt, in an attempt to drive down interest rates on mortgage loans, corporate bonds and other forms of credit. With this, the Fed hopes to drive down rates not by expanding its portfolio, as it has done twice in recent years, but by shifting its money into riskier long-term investments.

The Fed has amassed more than $1.6 trillion of federal debt. It said that by June 2012 it would sell $400 billion in securities with remaining maturities of less than three years and buy roughly the same amount in securities with maturities longer than six years. It said the result would shift the average maturity of its holdings to 100 months, or more than eight years, from the current average of 75 months, or just over six years.

Lower interest rates so far had not produced the full measure of predicted benefits because lending standards remained unusually strict. Most outstanding mortgages still carry interest rates above 5 percent, despite the availability of lower rates, because it remains difficult to refinance. Tough lending standards are likely to limit the benefits from lowering interest rates. Loans already are cheap, but they are also hard to get.

The Fed announces extending its Operation Twist till the end of 2012 in response to weakening labour market and economic prospects. The FOMC said that it "intends to purchase Treasury securities with remaining maturities of 6 years to 30 years at the current pace and to sell or redeem an equal amount of Treasury securities with remaining maturities of approximately 3 years or less". This continuation of the maturity extension program should put downward pressure on longer-term interest rates and help to make broader financial conditions more accommodative. This does not add to the Fed’s balance sheet but is intended to lower long-term interest rates, therefore offering some relief to the economy.

In other words, the Fed said that it would buy about $267 billion in longer-term Treasury securities over the next six months, with money raised by selling some of its current holdings of short-term Treasuries, maintaining its portfolio at roughly the same size.
Posted by Urbanomics at 6:11 AM