The meaning of the gold price surge

Conventional wisdom on the surging gold prices has been that it is in indicator of inflation wary investors fleeing to a traditional safe asset. Accordingly, conservatives have invoked the recent spike in gold price in support of their advocacy for fiscal consolidation.

Paul Krugman has an interesting post, where he argues that contrary to conventional wisdom, deflationary fears may be driving gold prices. He points to the famous Hotelling Rule which says that people have an incentive to hold onto an exhaustible resource (by storing it or keeping it unextracted) because of rising prices. Economically this means that "a mineral deposit in the ground has the same significance as a bond, and is in some sense interchangeable with such a financial instrument".

A consequence of this Rule is that, assuming negligible storage costs and the major part of the stock has already been extracted (so the choice is between storing it for the future or selling it now), the "real price must rise at a rate equal to the real rate of interest". If the real rate of interest is lower, as is the case now, people have an incentive to "hoard gold now and push its actual use further into the future" because the lower rates reduces the return on investment of the sale proceeds. This translates to higher prices in the short run and the near future. Krugman writes about its implications,

"(T)his... 'real' story about gold, in which the price has risen because expected returns on other investments have fallen; it is not, repeat not, a story about inflation expectations. Not only are surging gold prices not a sign of severe inflation just around the corner, they’re actually the result of a persistently depressed economy stuck in a liquidity trap — an economy that basically faces the threat of Japanese-style deflation, not Weimar-style inflation... And if you view the gold story as being basically about real interest rates, something else follows — namely, that having a gold standard right now would be deeply deflationary. The real price of gold 'wants' to rise; if you try to peg the nominal price level to gold, that can only happen through severe deflation." 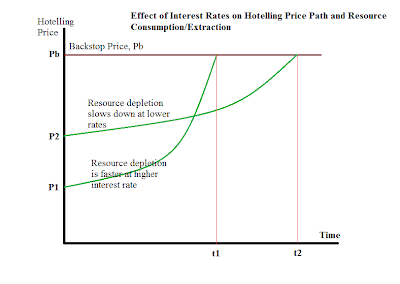 In other words, since interest rates are low and rational expectations are for an extended period of low rates (and therefore low inflation), people prefer to hoard or store gold, thereby boosting gold prices in the short-run. This analysis would see the increase in gold price as a signature of deflation.

In another post Krugman also makes the distinction between gold and other commodities, in so far as their applicability to this hypothesis. Unlike gold, most other natural resources, including oil, does no conform to atleast one or both of the assumptions - negligible storage costs and most stock has been extracted out.
Posted by Urbanomics at 6:03 AM