The Union Budget doubled the allocation for the National Rural Employment Guarantee Scheme (NREGS) by 144% to Rs 39,100 Cr. Further, in two important changes to the program, it was decided to increase the minimum wages provided under NREGS from Rs 60 to Rs 100 (and that too indexed to the consumer price index for agricultural labor), and converge with other ongoing schemes relating to agriculture, forests, water resources, land resources, rural roads, in 115 districts in the first phase.

The convergence with other schemes is a welcome initiative and would increase the efficiency of the resources deployed and the productivity of assets created. Besides, it will also help leverage the resources under the NREGS to increase the coverage of the respective schemes. In fact, this convergence can be taken another step ahead by linking it to the labor cost for creation of more material-cost intensive community assets like school, health center buildings and even rural housing programs etc. Another level of convergence would be to link this with the National Skill Development Mission and provide the wages as stipend to the trainee apprentices, though implementation and monitoring would be a challenge.

However, the decision to raise the minimum wage to Rs 100, while certain to boost rural wages, is also likely to produce numerous undesirable incentive distortions. This is because the new proposed minimum wage is far above the prevailing market wages in most states for various rural farm and non-farm jobs. Econ 101 teaches us about the likely effects of such a minimum wage and the graph below illustrates its effects. 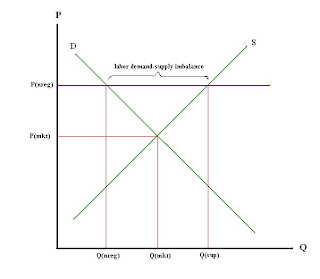 The minimum wage would immediately mark up the market clearing wages for rural labor to P(nreg), thereby lowering the market demand for them from Q(mkt) to Q(nreg), even as the available supply of labor increases from Q(mkt) to Q(sup). This would mean an artificial displacement of labor from the lower paying rural occupations like farm labor and other off-farm activities into the NREGS. Government, through the NREG, would effectively become the employer of first resort in rural India.

It has been found that minimum wages reduce the employment of young and low-skilled people (who are more likely in the poorer families). When faced with deciding which low-wage and low-skill worker to retain following a minimum wage increase, rural employers may opt for a teenager, who may have high potential, over an adult who, because he still earns a low wage, likely has much lower potential.

As David Altig of the Atlanta Fed writes, "If you are an adult and still in a minimum wage job, chances are you have those attributes that are associated with low productivity. If you are a teenager, on the other hand, there is still a chance you are a high-productivity type. Faced with a government mandated hike in the wages paid to workers in minimum-wage jobs, the percentages dictate you go with the teenager. Which leaves in the cold the people we probably most want to help."
Posted by Urbanomics at 8:02 AM