Tax increases are back!

As the global economic crisis induced fiscal strains on governments increases, and the public debt and deficits mount, Governments across the world are re-examining their tax rates and schedules. After two decades of an ideological assualt on taxes, tax rises are back in vogue!

In keeping with his election manifesto, the Obama administration has already declared that it proposes to let the Bush tax cuts expire by 2010, thereby effectively increasing the marginal tax rates from 35% to 39.5%. It has also proposed other tax increases, including one that forces hedge funds and private equity firms to pay higher corporate income tax rates on their profit as opposed to the lower capital gains tax rates.

In its annual budget, the British government recently announced more than $1 trillion in deficit spending over the next five years, to be partially financed with increase in marginal tax rates from 45% to 50%, coming into effect from April 2010. 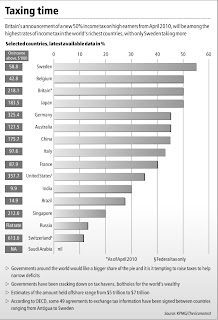 As can be seen from the graphic above, the marginal tax rate in India is one of the lowest. Therefore, given the limited fiscal space available for the government and the massive and mounting need to scale up government spending, India has enough room to raise its marginal tax rates to finance this expenditure. I have blogged earlier about the case against lowering direct taxes in India and the importance of luck in determining success.

Posted by Urbanomics at 9:11 AM

Email ThisBlogThis!Share to TwitterShare to FacebookShare to Pinterest
Labels: Taxation