Economix has an informative survey of the Fed's massively bloated balance sheet, a definitive indicator of the aggressive role that monetary policy has played during the ongoing crisis. 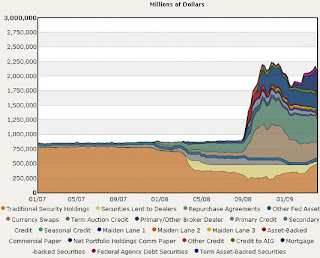 1. Monetary policy, which does not require an Congressional approval and does not require planning time, has been much more aggressive than fiscal policy during this recession.
2. Though the expanded balance sheet entails some risk, as evidenced by the losses suffered by AIG and Bear Stearns, the Fed is actually making some profit for now.

3. Drawing down the Fed’s balance sheet, and thereby drain some of the liquidity from the market, to its pre-crisis levels will require some delicate maneuvering. Doing it too soon may end up short-circuiting all the efforts so far, whereas waiting too long may create the conditions for a massive monetary and credit expansion, and thereby cause a lot of inflation.

4. Some of the items on the balance sheet can be phased out easily, while some would require time. Term Auction Facility and Commercial Paper Funding Facility can be drawn down quickly, whereas Fed's outright purchases of Treasury securities, Term Asset-Backed Securities Loan Facility (TALF) and swap lines with other countries may not be easy to painlessly draw down.

Update 2
The Federal Reserve Board announced preliminary unaudited results indicating that the Reserve Banks provided for payments of approximately $46.1 billion of their estimated 2009 net income of $52.1 billion to the U.S. Treasury. This represents a $14.4 billion increase over the 2008 results. James Hamilton analyzes this here.
Posted by Urbanomics at 5:57 AM