With the Q4 2015-16 results declared, the admirable folks at Credit Suisse have their latest update on India's banking sector. The non-performing loans have exploded by nearly Rs 3 trillion over the last two quarters to about Rs 6 trillion or 8.1%. Worryingly, coupled with stressed assets, the total figure may well be above 17%! 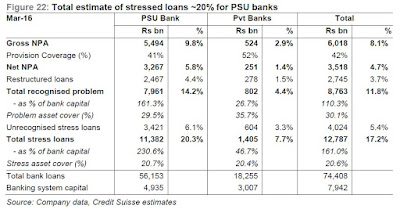 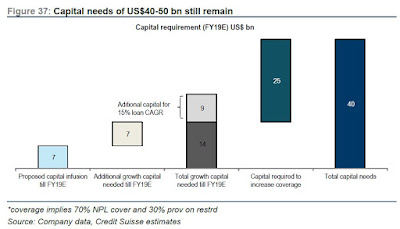 Currently, the bank credit is flowing mainly on the back of private banks, who though made only 25% of the total banking loan book had over half the profits, and contributed four out of the five banks which had double digit loan book expansion in 2015-16. The Credit Suisse report estimates that PSU banks would need five years of profits to provide for all the stressed loans. In fact, including the stressed loans (assuming 30% go bad), just four of the 22 PSU banks covered have positive net worth!

In this context, the drip-by-drip capital infusion is simply too little. As the report points out, the losses in 2015-16 more than wiped out the capital infusion done by the government. Whatever other reforms are undertaken, and there are many required, there cannot be any substitute for massive capital infusion for the public sector banks. And this will have to be in the form of allocating about 0.5% of the GDP for recapitalization for the next three years. It may even be alright to have the fiscal deficit targets of 3.5%. 3.25%, and 3% each for the next three years to meet this objective.
Posted by Urbanomics at 6:53 AM