The World Bank's latest Global Economic Prospects, apart from lowering global growth estimates from 2.9% to 2.4%, has an analysis which confirms a slow down or even a reversal of the economic convergence between rich and developing countries. The FT has this summary of the report,

Last year just 47 per cent of 114 developing economies tracked by the bank were catching up with US per capita gross domestic product, below 50 per cent for the first time since 2000 and down from 83 per cent of that same sample in 2007 as the global financial crisis took hold... But over the past three years, as major emerging economies such as Brazil, Russia and South Africa have slowed or fallen into recession, the slower average growth means the number of years it would take to catch up with the US has grown to 67.7 years. For frontier markets, those more fragile economies further down the development scale, such as Nigeria, the catch-up period more than doubled from 43.1 years to 109.7 years. 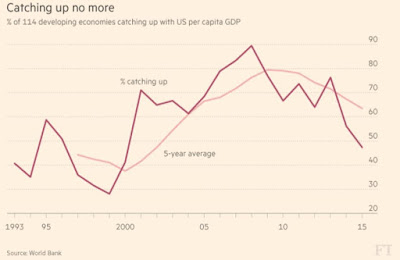 This also means that the number of years necessary for these countries to catch up with the US economic output level has increased. 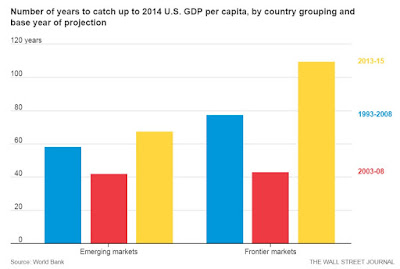 This comes on the back of a recent report by Capital Economics which highlighted the challenge with maintaining the same pace of convergence as economies develop. The period since 2000 has been undoubtedly the high watermark of convergence, 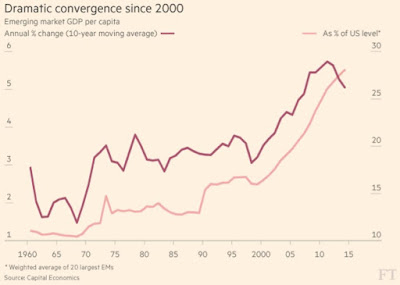 But, as graphic below shows, going forward, convergence will slow down as per capita incomes in countries like China and India increase, and their respective potential growth rates decline. It also shows that for its economic size, and despite the high growth episode of 2003-08, India has grown at atleast four percentage points below its potential rate in the 2000-14 period. 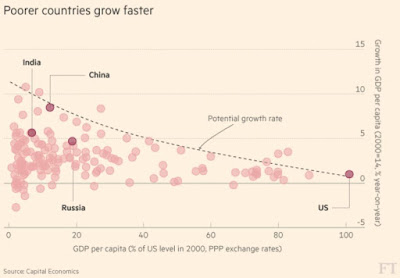 Adding to the problems, as an OECD report highlights, is the slow pace of global trade, which has been declining continuously since the crisis. 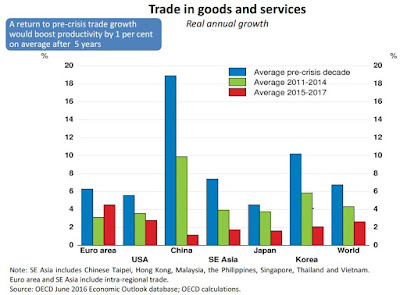 But, in light of the larger size of the emerging economies, the Capital Economics report argues that their growth will matter even more for the world economy,

EMs now account for about 60 per cent of global GDP, compared with 40 per cent in 2000. If developed economies grow at the 1.9 per cent annualised rate the IMF predicts in the coming five years, this suggests global growth could even be stronger with EMs growing at 4.5 per cent (but accounting for 60 per cent of the global economy) than when they expanded by 5.5 per cent but accounted for only 40 per cent of it.

It may be presumptuous to draw too many conclusions from such cyclical trends in emerging economy growth. The pre-eighties period of the last century was associated with sustained high growth among developed economies, leading some economists to describe it as a period of "divergence, big time". Since the eighties, led by the East Asian economies and China, the developing countries have grown at a much faster rate, again leading some others to describe it as "convergence, big time". Statistically, at least, for the respective periods, both were largely correct.

But now, as the major developing countries, outside Africa, approach lower middle-income status, the pace of convergence will, not surprisingly, decline. But the overall trend towards convergence cannot be denied. We are more likely to have "convergence, small time". The final verdict belongs to the always incisive Dani Rodrik,


It’s also interesting to see how the bounce back from a former, overstated conventional wisdom generates its own exaggerations. Contrary to much grumbling at the present, I do not think economic convergence is dead. I continue to think that developing countries as a whole will grow more rapidly than the advanced economies. But some of this will be due to a trend decline in the growth rate of the advanced economies. And the rate of convergence will not be nearly as rapid as what we have seen over the last two decades.

Posted by Urbanomics at 7:09 AM