1. Despite concerns about its decline, Apple dominates the global smart phone market,

2. The WSJ captures the increasing weakness among emerging market economies as reflected in the successive downward revisions of their growth projections by the IMF. 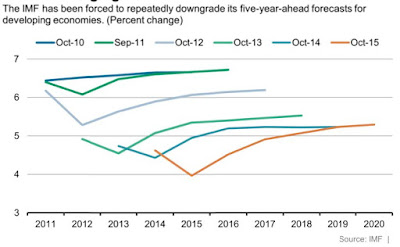 3. For all talk of China's debt stricken corporates, India's corporate debt servicing problem is worse than that of Chinese firms, and has remained at that level for more than three years.

4. An OECD policy note finds that financial expansion fuels greater income inequality, and advocates the use of macro-prudential instruments to prevent credit over-expansion and eliminating the tax bias against equity (interest payments are deductible from income tax payable, whereas dividends are not). It also "supports measures to reduce explicit and implicit subsidies to too-big-to-fail financial institutions through break-ups, structural separation, capital surcharges or credible resolution plans". Underlining the skewed nature of its effect, a 10% of GDP expansion of financial sector credit has a positive effect on incomes of only the top decile of households. 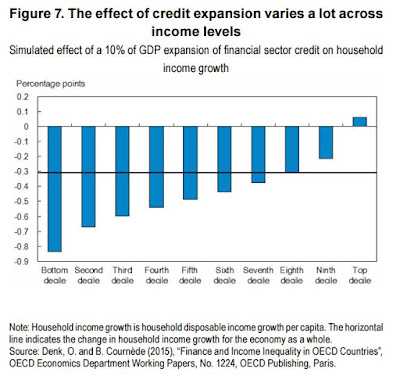 5. Thomas Piketty's book elevated the problem of widening inequality to the center of public policy debates across the world. However, the consensus on its contributors, leave aside how to mitigate it, elides us. Skill-biased technological change, automation of middle-class jobs, greater financialization, weakening unions, greater returns to capital complemented with stagnating labor incomes etc have been blamed. In this context, Mathew Rognlie (paper here) has this compelling graphic which spotlights attention on the role of housing prices as contributing to the inequality wedge. 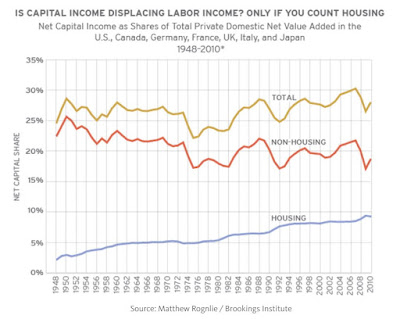 As the graphic shows, Rognlie argues that "recent trends in both capital wealth and income are driven almost entirely by housing". It does not depreciate whereas modern technology investments depreciate rapidly. He, therefore, advocates liberalization of zoning and building regulations to lower property prices. Irrespective of whether it is the leading contributor to widening inequality or not, its can be safely presumed that greater deregulation of the property market has so many beneficial effects.

6. The latest NSSO data draws attention to India's chronic under-employment problem. Though there were 62 million graduates and post-graduates in 2011-12, formal unemployment rate was less than 5%, since a large share of them are employed in occupations which clearly do not need such educational qualifications. Livemint has the followin graphic about the occupation patterns of Indians. 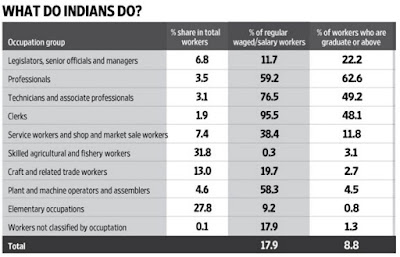 Underlining this, just 35.4% of graduates and above have regular salary paying jobs. 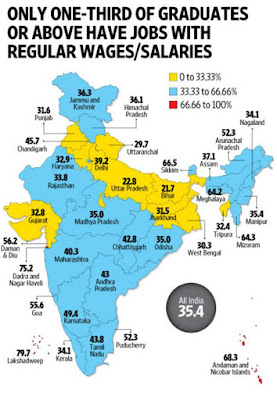 7. There are very few large low-hanging fruits with public sector reforms in India. One exception may be Indian Railways and the potential benefits and savings from a series of cumulative operational reforms. Rationalization of trains and routes, increasing speed by reducing stoppages, radically improving its IT systems, outsourcing services, more efficiency manpower deployment, and so on have massive potential for unlocking value. This is apart from more macro and policy-oriented reforms like private participation, PPPs in the development of railway stations, high-speed rail etc.

The challenge is with the political economy of these reforms. One strategy may be to undertake a devolution of far greater powers to the eighteen zones, especially operational powers, leaving the Railway Board with minimal co-ordination responsibilities. Letting zones develop as cost-centers and fostering competition among them in both commercials and service delivery quality is more likely to create the conditions required to overcome the political economy obstacles. Allowing a few mutant General Managers to change the rules of their game is a more likely strategy for change.
Posted by Urbanomics at 2:51 PM