Is there no "missing middle" in India's industry?

Livemint recently had a graph which pointed to research which questions the hypothesis of "missing middle" in India's manufacturing. It shows that mid-sized firms (employing 100-1000 people) are the country's biggest employers. 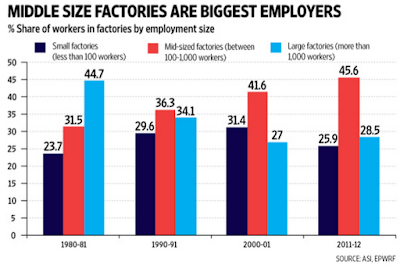 Economists Chang-Tai Hsieh and Peter Klenow have this graphic which too does not reveal any missing middle. 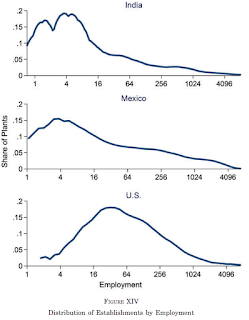 The claim of "missing middle" comes from the work of Anne Krueger and others and is reflected in the graphic below taken from this IFC report. 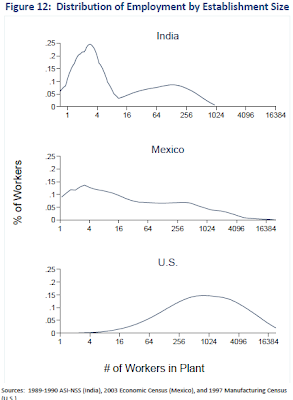 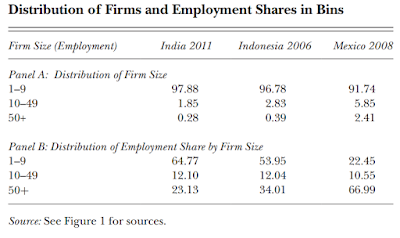 Their analysis leads to the following conclusions,

Third, we consider the possibility that regulatory obstacles generate a missing middle, but find no evidence of meaningful discontinuities in the firm size distribution. We focus on regulations that kick in at a certain size threshold and test whether there are an unusually large number of firms right under the threshold and an unusually small number of firms right above the threshold: specifically, we focus on a size threshold of 100 employees in India where various labor regulations kick in; a revenue threshold in Indonesia above which firms are required to pay value-added tax; and a revenue threshold in Mexico above which firms face higher tax rates. However, we find no economically meaningful bunching of firms around these thresholds, which suggests that stories based on thresholds due to formality or regulations are unlikely to be causing major distortions in the economy. 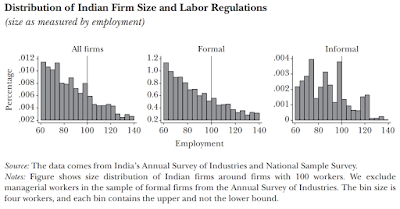 The last point and the graphic above assumes significance in light of the conventional wisdom in India that restrictions on labor retrenchment for firms with more than 100 workers has been responsible for keeping firms small and unproductive. As can be seen, there is no statistically significant discontinuity as the firm size approaches 100 (the small kink seen for informal firms would amount to just 418 firms for all of India!). The authors also do not see any discontinuity that is claimed by conventional wisdom around tax notches in Indonesia and Mexico. While the restriction imposed by the Industrial Disputes Act is undoubtedly distortionary, there is little empirical evidence to suggest that it is an important constraint, leave aside being a binding one.

Apart from the bi-modal distribution, another interpretation of the "missing middle" is the absence of sufficient number of intermediate sized firms. This assumes significance since firms generally start small and only a small proportion of them grow into large enterprises, leaving a significant share of intermediate sized firms. Given that the greatest marginal job creation and value addition happens when small firms grow into intermediate size ones, the deficiency of such firms is a matter of undoubted concern for India.

Anyways, missing middle or not, the bigger problem for India's economy is the small size of its overwhelmingly vast majority of firms and their very low productivity, which does not increase with time. Neither do plants grow as they age... 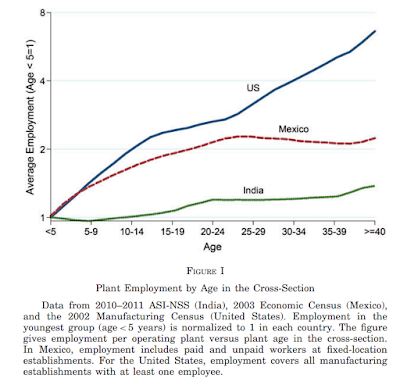 ... nor does their productivity rise with age. 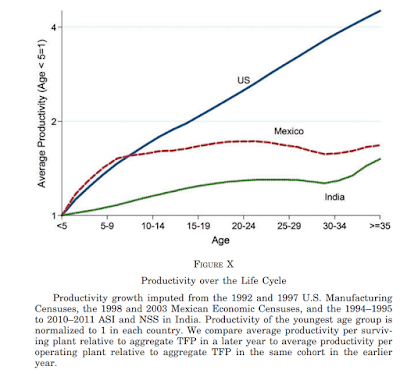 This is the nature of the beast that the country needs to overcome. Improved ease of doing business, better infrastructure, access to affordable credit, steady supply of skilled man power, and less of corruption are all essential ingredients in this pursuit. In any case, the works of economists like Chang-Tai Hsieh exploring the reasons for the wide income differentials across nations draw attention to the role of resource misallocation across sectors, across firms within a sector (small Vs big), and within firms (negligence on management practices) as possible contributors to the dominance of such dwarfs and unproductive firms.
Posted by Urbanomics at 7:11 AM