FT has this nice snapshot of the changes in yields of Spanish and US 10 year government bonds over the past week. They mirror each other with amazing similarity, albeit in opposing directions. 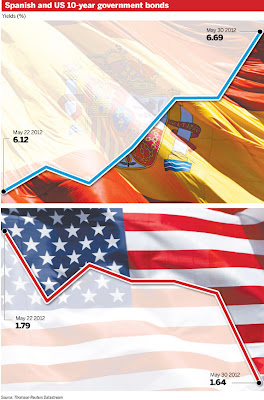 As expected, the bond markets have reacted to the unfolding events in Eurozone, in particular the problems in Spain, by fleeing to the safety of US and German government securities, whose yields have dipped alarmingly. While the movements have been pronounced since the beginning of the year, the longer-term trends have been unmistakable. 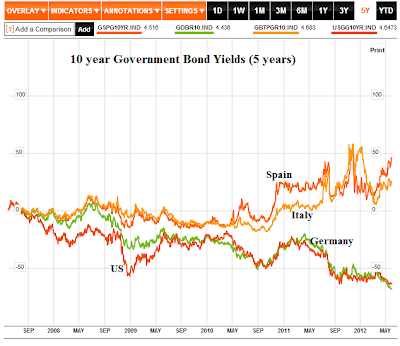 That these are historic times for the bond markets and clearly reflective of a massive bubble is borne out by this from the FT,


German two-year bond yields fell to zero for the first time, below the equivalent rate for Japan, meaning investors are willing to lend to Berlin for no return. US 10-year yields fell as low as 1.62 per cent, a level last reached in March 1946... German benchmark yields reached 1.26 per cent while Denmark’s came close to breaching the 1 per cent level, hitting 1.09 per cent. UK rates fell to 1.64 per cent, the lowest since records for benchmark borrowing costs began in 1703.

In fact, the German two year bund briefly entered negative territory. It slumped to its lowest ever minus 0.012 percent in a classic flight to safety. In fact the yields on 10 year bonds of Germany, Netehrlands, Austria, France, Finland, and Belgium dropped to record lows, even as Italy and Spain struggled to retain market access with their yields having crossed the 6 percent mark.

The bond market movements, atleast in US and UK, are clearly not driven by economic fundamentals of these countries. Their sovereign debt-to-GDP ratios, fiscal and trade deficits are clearly unsustainable and do not merit this level of market confidence. Further, the ultra-low bond yields have surely been a major contributor towards preventing their own sovereign debt positions getting out of control. It has also contributed towards their postponing many of the hard reforms (like health care reforms in the US) required for long-term debt sustainability. In fact, the ultra-low bond yields may be described as America's new "exorbitant privilege"!

The declines in their yields are a reflection of the magnitude of the problems facing the peripheral Eurozone economies. Capital of all kinds is fleeing to the safety and liquidity of these apparently safe haven securities. This build up also raises questions about the exit from the bubble. Once normalcy returns, either through a proper process of healing or a Eurozone break-up, the inevitable rise in bond yields will hurt these economies.

In other words, once the Eurozone crisis blows over, the US economy in particular will face two challenges. One, managing the unwinding of the massively bloated Fed balance sheet. Two, coping with the rising bond yields and its implications. The latter, which has played a major role in papering over many distortions in the US economy, has the potential to trigger off another recession if the balance sheets of households and financial institutions are not repaired by then.
Posted by Urbanomics at 6:15 AM