Excellent graphic (from The Economic Crisis, via Frances Woolley, via Mark Thoma) about how fear and contagion has erupted across the Eurozone and how the EMU Project contributed to the artificial supression of sovereign risk in its members. I have blogged earlier about how over a four year-period, beginning 1995, the bond yields more than halved and converged around 4% across most of the eurozone economies. 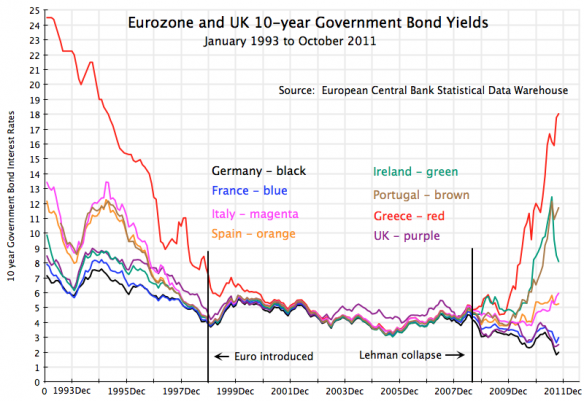 As the pre-EMU Greek bond yields indicate, the low borrowing costs enjoyed by Greece for many years now had merely papered over serious structural inefficiencies. Now these unattended problems are resurfacing with some vengeance as risk gets re-priced at its original level.
Posted by Urbanomics at 9:57 AM

It’s good to read such interesting stuff on the Internet as I have been able to discover here. I agree with much of what is written here and I’ll be coming back to this website again. Thanks again for posting such great reading material!!

I enjoyed reading your articles. This is truly a great read for me. I have bookmarked it and I am looking forward to reading new articles.