Econ 101 teaches us that prices adjust to clear supply and demand. Accordingly, in the aftermath of an economic boom when wages have risen, as recessions strike and unemployment rates climb, businesses lower wages which in turn lowers production costs and boosts investment and further hiring. In other words, high unemployment rates do not persist since wages fall proportionately to clear any labour market over-supply.

This has been used as a justification to oppose any government intervention to clear markets suffering from recessions. If the markets clear by themselves, it is argued, then where is the need for any discretionary fiscal policy intervention by governments. Though markets may deviate from the equilibrium, it is only a matter of time before the aforementioned dynamics takes over and restores stability.

However, as we have seen with the Great Recession and persistent high unemployment rate in the US, labour markets are not so accommodative. It is obvious that labour market does not clear so easily. In fact, the New Keynesian schools have long talked about "frictions" and "stickiness" with wages and prices which come in the way of markets regaining their earlier equilibrium. Economists like George Akerlof have pointed to downward wage rigidities, especially in conditions of low inflation.

In this context, an excellent study by researchers from the San Francisco Fed highlights the magnitude of this problem. They used individual-level survey data from 1980-2011 from the Current Population Survey (CPS), the monthly survey conducted by the Bureau of Labor Statistics used to measure the unemployment rate, to demonstrate the salience of downward nominal wage rigidity. They write,


Despite a severe recession and modest recovery, real wage growth has stayed relatively solid. A key reason seems to be downward nominal wage rigidities, that is, the tendency of employers to avoid cutting the dollar value of wages. This phenomenon means that, in nominal terms, wages tend not to adjust downward when economic conditions are poor. With inflation relatively low in recent years, these rigidities have limited reductions in the real wages of a large fraction of U.S. workers.

In the current American context, since inflation is low and therefore keeping wages constant cannot reduce real wages, the only way for employers to lower wages is to actually cut nominal wages. The graphic below is an excellent illustration. The dashed black line shows a symmetric normal distribution, while the blue bars plot the actual distribution of nominal wages in 2011. The blue bar that spikes at zero shows that a large number of workers report no change in wages over a year. The prominence of this psike shows that disproportionately large numbers of employers simply kept wages fixed over the year. This proposition is also supported by the fact that the gap in the normal distribution and the actual wage distribution is much higher on the left side. This gap suggests that the spike at zero is made up mostly of workers whose wages otherwise would have been cut. 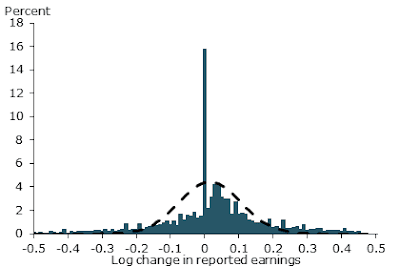 Similarly, the researchers also compare the trends in such wage rigidity over the past 30 years. They compared the proportion of workers in the same job who report no year-over-year wage change and find that their share rises in recessions and persist well into the recovery. Further, this proportion has risen sharply in the Great Recession for all categories of workers. They find that from 2007 to the end of 2011, the fraction of workers experiencing no yearly wage change rose to 16% from 11.2%. This is five percentage points higher than the average size of the spike at zero from 1983 to 2007. 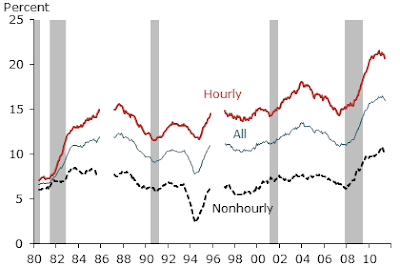 The same trend is observed among all categories of workers. 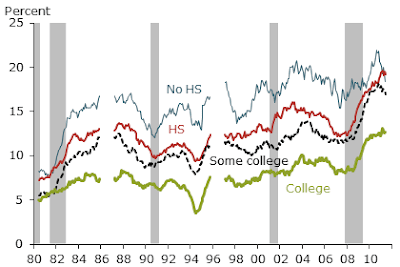