Is there a danger of an Indian sovereign debt default?

Traditionally, it has been argued that any debt burden is fine so long as the marginal cost of debt servicing is lower than the nominal GDP growth rate. However, this arguement may have become questionable due to reasons related to financial market liberalization

1. Emerging economies are exposed to massive spurts of "hot money" inflows, or Foreign Portfolio Investments (FPI), whose entry and exit are unpredictable and cannot be controlled in the absence of explicit capital controls. Further, the foreign origins of such capital means that managing these flows, inflows and outflows, have implications on the foreign exchange rates.

2. Private sectors too have become large borrowers from external sources and in foreign currencies. Further, unlike the governments, private capital often find it difficult to raise competitive longer term funding and therefore tend to rely on shorter term funds, thereby increasing the net short-term liabilities of the country and making them vulnerable to sudden shocks.

From their brilliant and magisterial examination of soveriegn debt crisis from sixty-six countries over eight centuries, Carmen Reinhart and Kenneth Rogoff conclude that excessive build-up of debt - public or private, external or domestic - always leaves countries vulnerable to defaults, especially when faced with economic and financial market shocks. They find that countries which run repeated large deficits, with borrowings concentrated on short-term maturities, and with a history of defaults, are vulnerable to such shocks.

After examining 250 episodes of defaults on external debt (public plus private) across countries over eight centuries, they explain the developing countries' 'debt intolerance' as the "extreme duress many emerging markets experience at external debt (public and private) levels that would seem quite manageable by the standards of advanced countries. The duress typically involves a vicious cycle of loss in market confidence, spiraling interest rates on external government debt, and political resistance to repaying foreign creditors... Safe debt thresholds turn out to depend heavily on a country's record of default and inflation."

They find that only 16.1% of the emerging market country debt defaults in the 1970-2008 period took place for countries with external debt to GDP ratio more than 100, whereas, 51.7% of the defaults too place for ratios below 60. It therefore becomes difficult to define a threshold of external debt for these countries beyond which their vulnerability to defaults increases, though the risks of a credit event (that could trigger off default) rises after 30-35% levels.

They reason that market confidence is a function of the inflation and repayment histories of these countries. Countries that have a history of external debt default have extremely low level of debt tolerance, and therefore become vulnerable in the face of even slight financial and economic shocks. They also find that most cases of recent external debt defaults have also coincided with high levels of domestic debt.

The Government of India's projected fiscal deficit for 2009-10 is 6.8% of GDP, the highest in 17 years and inclusive of a revenue deficit of 4.8%. Combining the off-budget items like oil and fertilizer bonds at 3-4% of GDP, and the states' deficit of 3%, the combined fiscal deficit of India is at an unsustainable 13-14% of GDP.

An examination of India's external and domestic debt figures, from the Economic Survey 2008-09, gives interesting insights about why India may be atleast slightly better placed on many of the traditional concern areas with respect to an extenrla debt default. Government liabilities, both internal and external, have been remarkably stable as a share of the GDP. 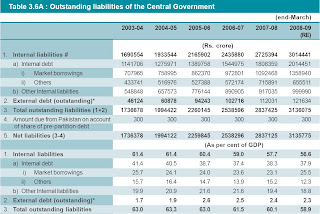 There are a few other reasons why India may be able to sustain the relatively higher debt to GDP ratio when compared to many other emerging economies. One, it has a much lower external debt exposure when compared to others, especially from East Europe. 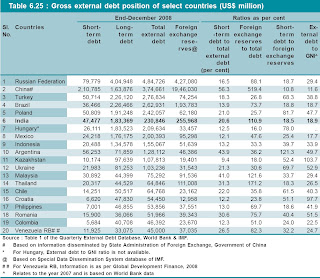 In fact, its public debt to GDP ratio is amongst the lowest and its real public debt has increased only slightly since 2007. 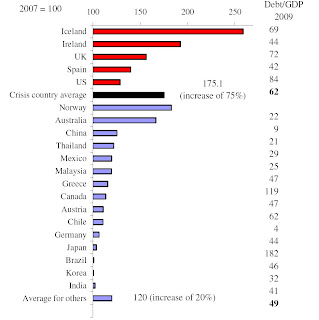 Second, its share of the short-term debt is much smaller as a share of its GDP and it also has a comfortable foreign exchange reserves to cover for extreme events. 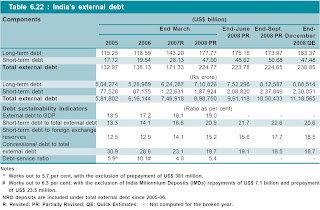 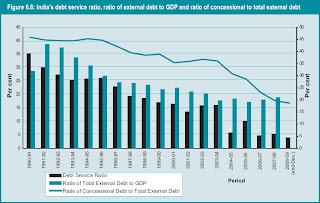 More importantly, unlike all other major developing economies, India has not yet suffered a major debt default or a period of runaway inflation that has eroded market confidence. In so far as India has fairly strong institutional governance mechanisms and a working judiciary, we may stand closer to the developed economies in our debt tolerance levels than to the other emerging economies.
Posted by Urbanomics at 6:17 AM

Merely because we have not suffered a major debt default does not mean we will continue to enjoy this status no matter how deep we go into debt.

In a paragraph you have yourself said that the combined fiscal deficit of India is unsustainable, then I could not found anything which shows me a why we are better off.

Unlike US we don't enjoy having reserved currency and much worse: we have a bulky service sector economy, largely depending on the overspending of US, UK, PIIGS etc. Our trade deficit is increasing every year as we are recklessly spending on imports. And contradictory to popular belief this is not on capital investment but things like rice, sugar, cars, TV etc which are for consumption. Had it not been so what capital investment requires 20 years to turn the trade balance from negative to positive.
What will happen tomorrow when US dollar crisis blosooms, then what we will pay to get all these imports and then how we will bring the inflation down? the future is very dark as I see it atleast dark before the sun rise.

The frightening thing is that some the economic policy makers/ advisers were key players (causing) in the earlier episodes as well.

Nope. India has never defaulted. We were very near a balance of payment crisis in 91 but loan and subsequent liberalization saved us. 58, 69 and 72 were restructurings. The US, UK have lot more restructurings than us. Hopefully we don't default.