I had blogged earlier about the impact of the proposed higher minimum wages under the National Rural Employment Guarantee Scheme (NREGS).

There are two forces working to increase the labor supply
1. New workers, attracted by the higher wages, join the labor force. They include those working in their own fields or in other self-employment occupations like cattle rearing.
2. Displacement of workers from other occupations where the wages are less than the minimum wage under NREGS. They include mainly farm labor and those involved in other non-farm activities. 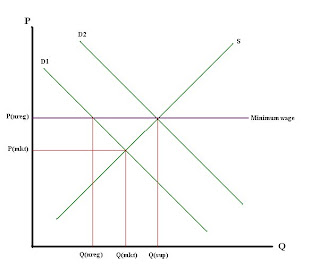 1. During harvest season, the demand for rural labor is relatively inelastic. This means that the displacement of workers from other occupations to the NREGS will be smaller.
2. During the remaining period, the demand becomes more elastic. However, the dominant effect during such times is the addition of new workers to the workforce, and the laid-off agriculture labor will find employment in NREGS.
3. The effect of higher NREGS wages is likely to be more pronounced on subsistence farmers, those involved in cattle rearing etc. These people will be attracted by the higher wages and may join the NREGS workforce. To some extent the increased availability of PDS foodgrains will make up for their foregone subsistence production.
4. The effect on skilled and semi-skilled labor is not likely to be much, since those wages will be competitive with the NREGS wage.
5. The unskilled or semi-skilled youth, who in normal course are likely to pursue some form of vocational training or apprenticeship, may be attracted by the higher NREGS wage, and postpone or even forego such opportunities. This can adversely affect the long-term productivity of rural labor.
6. Those involved in low paying self-employment livelihoods are more likely to gravitate towards the NREGS. The unskilled labor involved with non-farm and non-animal husbandry activities like smaller rural enterprises too are likely to move towards NREGS. The impact of both of this on rural entrepreneurship could be substantial.
7. The unskilled labor employed in the construction sector are also likely to move towards NREGS. This can adversely affect construction activity in rural areas.
Posted by Urbanomics at 7:22 AM

"The long term impact of the higher wages on agriculture output is likely to be minimal. In fact, it could be a much needed filip to boosting farm productivity." is a very optimistic and probabilistic statement.

How can the MREGA meet the challenge of 'de-skilling' of rural agricultural labor and eventual shortage of the labour for the farm sector?

There are more adverse effects than tangible benefits due to shortage of the low-cost agricultural labor.