For more definitive evidence of climate change and its catastrophic long-term consequences for the world, Paul Krugman points to two excellent graphics. First, the time series for the average annual global temperature since 1880 (shown as .01 degrees C deviation from the 1951-80 average), stripped off all the noisy fluctuations, an unmistakable upward trend - "the fitted line in the figure is a 3rd-degree polynomial, but any sort of smoothing would tell you that there is a massive upward trend". 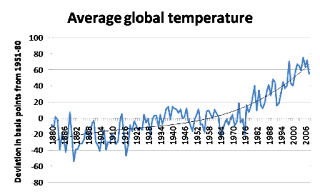 Second, a comparison of the the satellite imagery of Arctic sea ice cover, which reaches its annual minimum in September, from 1979 and 2007 makes the extent of damage very evident. 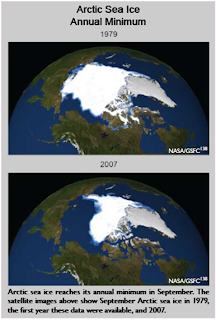 And all this is brought out in great detail in a report prepared by the US Government's Global Climate Change Research Program, which finds that global warming is unequivocal, has increased over the past 50 years and is due primarily to human-induced emissions of heat-trapping gases. It finds widespread climate-related impacts which are expected to increase and interact (to adverse effect) with many social and environmental stresses - increase stress water resources, crop and livestock production will be increasingly challenged, coastal areas are at increasing risk from sea-level rise and storm surge, risks to human health will increase, large changes in climate and ecosystems. Krugman has a nice article on climate change deniers. 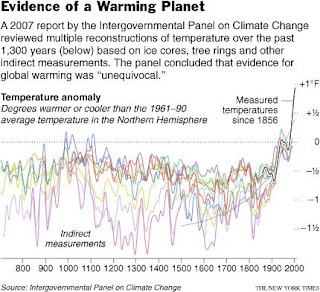 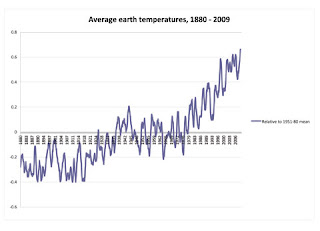 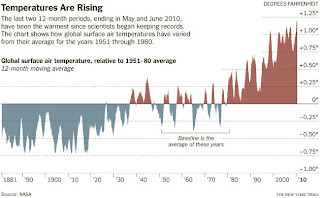 Update 3 (7/8/2010)
Economist has this graph of the increasing average global surface temperatures.

Posted by Urbanomics at 6:37 AM

We can only assume that these people know what they are talking about and that the recommendations they make are for our benefit.

Relying on fossil fuels has no future anyway, so the sooner we switch to clean neregy production the better.