One of the more important reasons for containing inflationary pressures using a tight monetary policy has been that of the wage-price spiral. It had been argued that higher prices would set in motion an offsetting upward pressure on wages, which in turn would drive up inflationary expectations. But since the wage-price spiral led double-digit inflation of the seventies, figures from atleast the last two decades appear to indicate that the American Government has conquered the spiral. 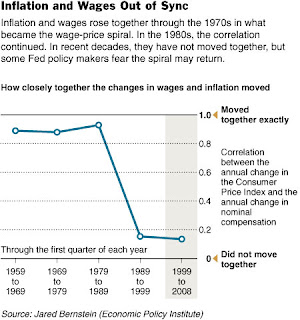 As Louis Uchitelle argues, the driving force behind this spiral, workers leverage, has diminished substantially, atleast in the US. Unions have declined, except in small sectors, to the point of being virtually irrelevant; cost-of-living adjustments, once commonplace, have disappeared; companies are not creating jobs; and the threat posed by off-shoring has conditioned workers to not even ask for a raise. The trend of falling real wages for atleast three decades now has also contributed to keeping the wage-price spiral down, leading to a resigned acceptance of lower living standards than to expectations of higher wages.

Unlike America where only 7.5% of workers are unionized, more than 25% of employees in the European Union are members of trade unions and in some EU countries the wages set in union contracts are automatically extended to other companies in the same industry. Martin Feldstein therefore reasons that the stronger possibility of wage-price spiral is one of the reasons for the more hawkish monetary policy stance of the European Central Bank.

This "anchoring of inflationary expectations" among workers has kept a lid on the wage-price spiral by persuading workers that inflation would be controlled. The need to "anchor inflation expectations" has been the justification behind the tight monetary policy stance of the Federal Reserve.

Paul Krugman feels that the current round of inflationary pressures are under control, wages aren’t taking off, the labor market is weak, and the one-time oil and food price spikes will end in a deflationary environment. He therefore finds no need to tighten monetary policy. Free Exchange too seems to think that food price inflation is set to fall.

Update 1
Paul Krugman has this graph indicating the diconnect between wages and consumer price index. He argues that with commodity prices falling, inflation may be on its way down. 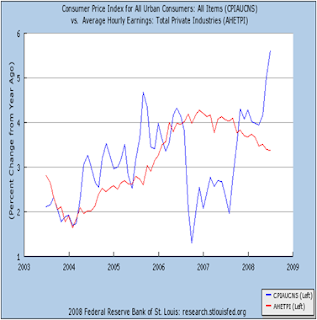 Posted by Urbanomics at 6:02 AM