... housing inequality, not income inequality, primarily determines how much wealth inequality there is in most Western countries.

Striking snippet about the steep increase in property prices in large US cities,

Average New York City metropolitan area house prices are up 706% since 1980 (or 376% more than US consumer prices, and 326% more than US wages). For San Francisco the rise is 932%. London house prices are up over 2,100% in that period (or around 1,500% more than wages). Prices in Sydney, Australia, have risen by 1,450% (compared to hourly wage increases of 480%). In Ireland, prices have risen by about 800% in that period, driven by rises in Dublin in particular... These prices range from about twice to four times the cost of building new homes of equivalent specification... By contrast, almost every other household product has become better and less expensive since then. Compared to 1975, the number of hours a median American worker would have to work to buy a television fell from 60 hours in 1975 to 7 hours in 2013; to buy a fridge-freezer, it fell from 65 hours in 1975 to 20 hours in 2013; to buy a manual exercise treadmill, from 18 hours in 1975 to 6 hours in 2013; and to buy a washer-dryer, from 67 to 30 hours. Even cars are three times ‘cheaper’ in terms of hours worked on an average hourly wage now than they were in 1964. And none of these estimates accounts for how much better most of these products are now than they were in 1975.

The advantages of city life are well-known.

In the United States, productivity per worker tends to rise by 2% or more with each doubling of city size... For idea-focused industries like software, localisation benefits dissipate within 10 miles; for extremely idea-focused industries like advertising, they dissipate within half a mile. Inventors who move from a smaller cluster to a bigger cluster tend to see large increases in their patenting productivity... According to one recent study, after controlling for other factors, a 10% rise in house prices was associated with a 1.3% fall in overall births.

This on the potential benefits from vertical development,

Economists Gilles Duranton and Diego Puga judge that if New York allowed more of the sorts of densities that were more common historically, rents and house prices would fall towards construction costs, and the city would at least double in population, to over 40 million people... According to one study, if just three cities – New York City, San Jose and San Francisco – loosened their rules against building denser housing to the national average level of restrictiveness, millions would move to jobs that made the best use of their skills and total US GDP would be 8.9% higher. This would translate into average American wages being $8,775 higher per year. Others go even further. Duranton and Puga estimate that the average income gain from a housing regime that allowed easy building could be around 25%, or around $16,000 more per person per year. To put that in perspective... sixteen thousand dollars per capita is the entire yearly income of people in Greece or Hungary.

This contrast between Japanese and US cities on density,

In Tokyo and Osaka just 12% and 13% of trips are by private motor vehicle, compared to 85% in Los Angeles, 77% in Chicago, 91% in Houston and 87% in Phoenix... There are 23.7 million residents in North America’s biggest metropolitan area, New York City, and these people are spread over 34,500 square kilometres. Only a small part of this is dense enough to sustain walking, cycling, and transit. By contrast, Tokyo metro area has a far larger population, with 38.1 million people, but they are four times more densely populated, across only 8,500 square kilometres. This means practically all of them can live car-optional lifestyles most of the time. Japan’s second city, Osaka, has 19.3 million: more than 45% of the country’s inhabitants live in the biggest two cities alone. By contrast, even at the most expansive definition, only around 12% of the US population live in its biggest cities.

This on the climate benefits of density

In 2018, the average Japanese person’s consumption caused 10.3 tonnes of CO2 emissions, while the average American caused 17.6 tonnes of emissions, or 74% more. Focusing on transport, we can see how much of that is explained by Japan’s denser, transit-rich, more walkable cities. In 2016 transport accounted for 1.63 tonnes in Japan, versus 5.22 tonnes in the US – over three times worse. Maps of the UK and US East Coast show clearly how the densely populated parts of cities like New York, Philadelphia and London emit far less carbon per head than the rest of the surrounding sprawl. The UK’s Centre for Cities estimated that people living outside cities accounted for 50% more carbon emissions than those living inside them. 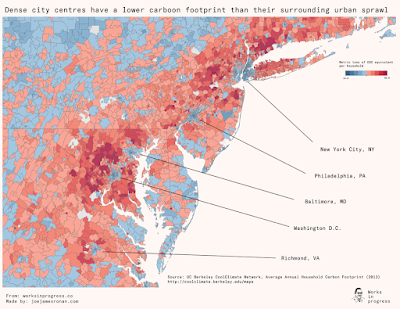 All these being the case, the challenge is to make housing affordable enough. I have blogged here, here, and here on the issue. This summary is apt,

Ultimately there is only one solution to addressing the issue of affordability, expansion of supply. Given the more or less fixed stock of land mass within a city, the solution has to involve both building on unused lands (extensive margin) and vertical development on existing properties (intensive margin). Further, there has to be a simultaneous expansion in supply of premium, middle-class, and low-income housing supply so that price transmission happens across the market.

Given the vast affordability gap and the limited supply, market driven approaches that encourage housing development through easing regulatory restrictions and encouraging the entry of new actors like private equity are unlikely to make any significant dent on the issue of affordable housing.

Posted by Urbanomics at 5:55 AM