Some observations on Zomato and Swiggy

Here are some facts. Zomato raised $1.3 bn through an IPO which was oversubscribed 38 times and which valued it at $14.2 bn. At about the same time, its competitor Swiggy raised $1.25 bn in a Series J fund raise which gave it a post-money valuation of $5.5 bn. 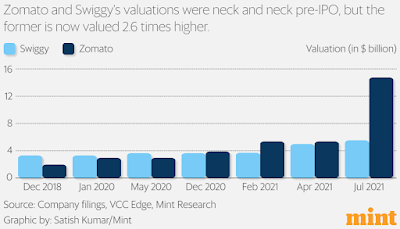 Techcircle have these comparative numbers for Swiggy and Zomato. 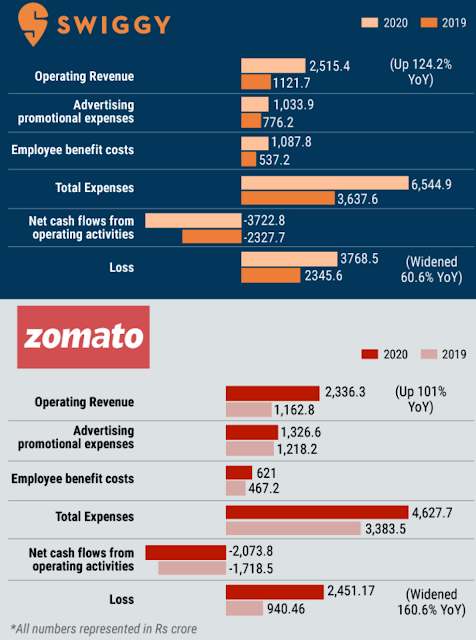 By all metrics, Swiggy appears bigger, even if only slightly, than Zomato.
And this disaggregating incomes, 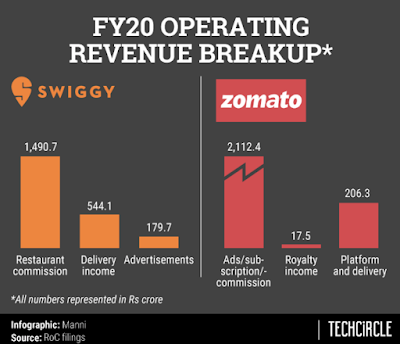 More information is required to make any rigorous comparative assessment of the two. That would include usage intensity numbers like average order size, average transactions per user each month, fee percentage from restaurants and so on.
I blogged here yesterday on the bubble nature of the IPO.
Some observations:
1. It's more likely that the the valuation of both are the same, as Aswath Damodaran has shown, whereas the public market price of Swiggy is couple of multiples higher. In simple terms, Zomato's valuation is only $5.25 bn, whereas its current market price is $14.2 bn.
2. If the wisdom of the crowds is superior to that of a few individuals, then investors should be piling onto Swiggy, the competitor of Zomato. Even if not superior, but if Swiggy is also planning to go public soon, then too there should be a parade of VC investors outside Swiggy's office. It's also a price arbitrage opportunity for the existing investors in Swiggy, who should also double up at the same or slightly higher price.
3. It's notable that Swiggy could raise $1.25 bn from private investors including Softbank and Prosus (Naspers) but only at a $5.5 bn valuation just a couple of days after Zomato completed its $1.3 bn IPO. Swiggy's investors got lucky and a great deal.
It probably because, even though the deal was closed just a couple of days after the Zomato IPO itself closed, the Series J negotiations and term sheets would have been fixed much earlier. In fact, $800 million out of the $1.25 bn was already disclosed early this year.
4. But, if markets stay as frothy as it's now, Swiggy's promoters and investors need not worry. Unlike Zomato's promoters who, judging from the first day pop left huge money on the table, Swiggy's promoters could rake in much more by pricing its IPO closer to the comparator market price. Swiggy and other could benefit from the later mover advantage.
5. There appears to have been a first mover disadvantage for Zomato in leaving money at the table and not maximising its IPO takings. Conversely there may have been a first mover advantage for its investors in maximising their returns.
Posted by Urbanomics at 9:04 AM