More evidence of the small India middle class comes with the news that Harley Davidson is quitting India as part of its global restructuring to exit markets where volumes and profits have been elusive.


Harley is the third US automaker to shut operations in India during US President Donald Trump’s tenure. In 2017, General Motors — an American multinational corporation headquartered in Detroit — wound up its operations in the country and sold its plant in Gujarat. Last year, another US automaker Ford Motor Company pared back its interests and ceased independent operations in India. It transferred most of its India assets to a joint venture with Mahindra & Mahindra, after failing to gain a foothold for more than two decades in the world’s fourth-largest automobile market... Harley entered the Indian market a decade ago, but has so far managed to sell only 27,000 bikes, barely half of what the country’s segment leader Royal Enfield sells in a month. In the first quarter of this financial year, it sold only 100 motorcycles and for the whole of last financial year, it was 2,470 units — dropping from 4,708 units in 2015-16... Harley has an assembly plant at Bawal in Haryana, where it assembles completely knocked-down (CKD) motorcycles for local sales. While this unit accounts for a bulk of its sales in India, the company also imports completely built-up (CBU) motorcycles, where the import duty is as high as 50 per cent.

Recently an official of Toyota Kirloskar courted controversy by saying that taxes for SUVs and higher-end vehicles, going upto 50% of the price, made production unviable and had forced the company to shelve any expansion plans in India. Maruti and Hyundai, who are for all practical purposes only small car makers in India, make up over 70% of the market, and most of the rest too are fragmented among several small car brands. For a supposed 200 million middle-class, it is more likely that the demand for cars/SUVs priced more than Rs 15 lakhs (or even Rs 10 lakhs) may be in the order of about a couple (5 m) of million.

It may be true that some foreign auto manufacturers in India may have bet on the wrong market penetration strategies or failed in execution, but even if they had done everything right, in the absence of market demand their fates would not have been any different.

This is no indictment of any government, but an acknowledgement that the hype around the massive India middle class was misplaced. It should be seen as a statement of the reality.

This, this, this, and this are just some of the earlier posts highlighting this point about the narrow consumption class. This is a central thesis of my book with V Ananthanageswaran, Can India Grow? The idea is not to blame or criticise anything or anyone, but to acknowledge this reality as policies get debated and made.

In this context, an old data feature in Livemint on food consumption basket of Indians from the 2011-12 NSSO Survey. Consider this,

Their per capita consumption is 15 bananas a month, or one in two days. They have less than half a kilogram of mangoes a month and 200 gm of watermelon. They have one coconut, 700gm of apples and 200gm of grapes in a month. This is very modest consumption. Let’s take beverage consumption. The top 5% in urban India drink 11.3 cups of tea, 1.9 cups of coffee and 20gm of coffee powder and 0.335 litres of fruit juices. This can hardly be called splurging.

So how much does the 40-50th urban percentile eat then? They have 5.8 bananas per head per month; three-fourths of an orange a month; 5 cups of tea; 0.012 of a pineapple; almost 5 litres of milk; and 2.8 eggs a month, among other things. Indeed, even the relatively well-off 8th fractile in urban India, or the 60-70th percentile, had 3gm of butter a month, Rs1.45 worth of ice-cream, 3.3 eggs, seven bananas, 1.1 oranges and 2.5 lemons and 7 cups of tea a month. And if this is what those in the middle of India’s consumption ladder eat and drink, there’s not much point in looking at how much the bottom 5% eats. 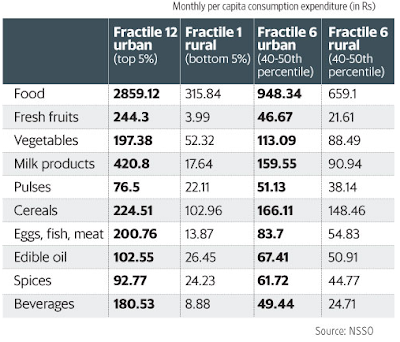 Navin Kabra uses the 2016 ICE 360 survey and his own survey to show how Indians' perceptions about their income status is so deeply flawed. The ICE Survey found that the average monthly income of the top 1% and 10% of all Indian households in 2016 was just Rs 66000 and Rs 35000 respectively. And a monthly income now of Rs 85000 would leave the person in the top 0.5%. Just 61% of the top 1% had four wheelers.

While this is the reality, the perception,

The upper class is minuscule, middle class tiny, and the overwhelming majority are really poor by any global yardstick of income and consumption,

The average monthly household income for all of India is about 22k (16.8k in 2016)... 87% of all the people living in metros are from the top 40%. Even if we regularly interact with the poor people in our city (which most of us really don’t), we rarely, if ever, meet anyone from the bottom 60% of India. Your domestic helpers are very likely to be in the top 40% of India. A lot of us think of ourselves as “middle-class”. In fact, the 2016 survey showed that 95% of the top 1% of Indians think of themselves as middle class or worse. Middle-India, defined as the people between the 20 to 80% income range, is not us by a long shot. 75% of middle-Indian breadwinners were illiterate or had studied just until primary school... What does most of India do? Only 20% of them had a salaried job. And 80% of those were grade IV jobs—i.e. peons, gardeners, housemaids, etc. 22% were farmers or had an agri-business of some sort. 25% were labourers or daily-wage earners.

Other interesting findings from ICE 360 - just 11% of Indian households have ever lived in rental accommodation; just 27% had non-trivial outstanding loans; nation-wide 40% of all loans were agriculture loans, whereas in metros 78% were home loans; but underlining how little of India is metro-India and how unrepresentative it is, just about 5% had home loans; 50% used firewood for cooking etc.

These numbers raises questions about the likely stimulative effects of concessions given on home loans, affordable housing etc. These are all sops to a sliver of Indians who live in the largest cities.
Update 1 (08.10.2021)
Interesting data about the missing middle class in India,

There are 40 million fewer Indians working today than there were in 2013, though 250 million more people came of working age. The participation rate in the labour force (those who are working or looking for work) is 61 per cent in the United States, more than 65 per cent in China and 72 per cent in Vietnam. In India this is 40 per cent, both according to CMIE and the government’s periodic labour force survey... Residential property sales have been stagnant. In the eight major cities, sales have been stuck at around 3 lakh units a year since 2012 (last year it was about half that). India is second from bottom on the Knight Frank Global House Price Index. There has been no growth in the sales of passenger vehicles for 10 years — about 2.7 million units in 2012, 2.7 million in 2015, 2.7 million in 2019 and 2.7 million in 2020, according to the Society of Indian Automobile Manufacturers. The government says this is because of Uber and Ola, but ride-hailing apps have not stopped the growth of passenger vehicle sales in the United States, where they went from about 10 million in 2009, the year Uber was founded, to 17 million. In China, sales doubled from 12 million to 24 million in this same period. In India, the sales of two-wheelers have been stagnant for six years, with 16 million sold in 2015, then 17 million in 2019, and 15 million in 2020. Something that has not received attention outside of the business dailies is that sales of commercial vehicles have stopped growing, with 6 lakh sold in 2015, then 7 lakh in 2019 and 5 lakh in 2020. Automobiles are about half of India’s manufacturing sector. Because auto sales have stagnated, manufacturing’s share of GDP fell from 16 per cent to 13 per cent after the launch of Make in India in September 2014. An analysis by the Centre for Economic Data and Analysis in May found that jobs in manufacturing halved from 51 million in 2016 to 28 million today. This aligns with the issue that is highlighted by automobile sales.

India as a whole is said to have 140 dollar-billionaires. According to Credit Suisse, there were 764,000 dollar-millionaires in India in 2019, i.e. those with wealth of Rs 7.5 crore and more... And in the same 2019, all of 316,000 filed tax returns declaring income of over $70,000 (or Rs 50 lakh)... Again, there is no central data point, but checks with companies in the business suggest annual purchases and bookings of fewer than 3,000 residential properties that are individually worth Rs 5 crore and more. Even if one were to lower somewhat the bar for unit value, the number of transactions would remain decidedly modest in relation to the reported numbers of millionaires... Sales for the top three German luxury-car makers peaked at 32,500 in 2017 and have fallen since. In 2021, they were just 22,500 -- affected partly by Covid and then the shortage of chips. Allowing for that, and adding on the numbers for Jaguar-Land Rover and top-end Japanese models like the Lexus, the total is unlikely to cross 40,000. The mismatch with the reported number of dollar-millionaires is obvious.

Posted by Urbanomics at 9:33 AM