As the bond market rally continues unabated, yields are touching historic lows. The yields of Bloomberg Barclays Multiverse Index, the broadest bond market gauge that tracks more than $58 trillion of debt is nearing the all-time low of 1.4% touched in 2016. 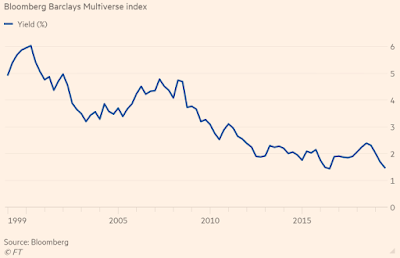 The FT also has this nice graphic that points to a bond market "yield drought"! 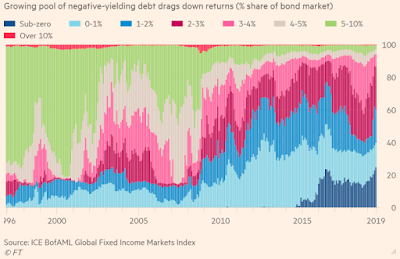 Underlining the trend, Germany just sold 30 year bonds at slightly negative yield - it sold €824 million ($914 million) worth bonds that pay no interest, at slightly above face value, so when they mature in 2050, Germany will pay back €795 million. The logic as an FT editorial writes is pretty compelling,

Buying longer-dated, negative-yielding debt makes sense for pension and insurance funds matching assets to future liabilities. Paying to lend money to governments is also profitable — if a year later investors pay even more for the privilege. Thirty-year Bunds bought 12 months ago have generated returns totalling more than 30 per cent. Returns on Amazon shares were flat in euro terms over the same period. The German Dax share index lost 5 per cent. Repeating that performance would require a further percentage point fall in 30-year yields, says Bank of America. Scarily, that is not ridiculous. US president Donald Trump wants the US Federal Reserve to slash its benchmark interest rates. Other central banks would have to follow. Global trade wars and Brexit could give them cover. Supplies of German Bunds are limited, pushing prices up and yields down.

In many ways, the global bond market mirrors what Japan has been going through for the past two decades - howsoever low it gets, it never ends. We're all Japan now!

The upshot of this is also the massive risks it poses to the financial system from a future rise in bond yields, the duration risk. Sample this FT assessment,

Diversified investment portfolios have benefited from the tailwinds of the bond rally. A global index of government bonds, for example, has returned some 8 per cent over the past 12 months, compared with a drop of 2 per cent for the FTSE All World stock index. An index of US Treasury bonds with a maturity of more than 20 years has appreciated by more than one-fifth this year alone, with price performance enhanced by the August grab for long-dated paper... "At ultra-low bond yields, the risk of owning bonds converges with the risk of owning equities. The short-term potential for capital appreciation — nominal or real — diminishes, while the potential for vicious losses increases dramatically.’’ The financial system is thus left exposed to any abrupt rise in bond yields while having little scope for strong price appreciation, given the extreme moves that already reflect plenty of bleak growth and inflation data down the road. What should really worry people is how a prolonged episode of negative and lower-yielding government bonds intensifies the challenges facing bank profitability. There are also red flags fluttering over valuations for pension funds and the viability of insurers, as bond coupons shrink. Herein resides ammunition for the next episode of financial market distress, which played a major role in torpedoing the global economy in 2001 and 2008.

Posted by Urbanomics at 2:24 PM