Some thoughts on job creation in India

What can be done to enhance productive job creation in the Indian economy, across sectors or within specific targeted sectors (like textiles)?

The obvious immediate responses are infrastructure bottlenecks, enabling access to credit, and lower taxes. Policy response has been mainly in the form of establishing special economic zones and industrial parks, and offer fiscal concessions and input subsidies. In recent years, there has been a focus on enhancing the ease of doing business.

While these are all important, and all of them are works in progress, there is little to suggest that these are the binding constraints. Alternatively, conditional on the state of the country's systems, what policy enablers are likely to have the biggest impact on job creation?

Unfortunately, far too little high-quality field research happens in this area. If only some of the numerous development economists who have made successful professional careers for themselves studying poverty in India with limited applied policy relevance had engaged with this issue. If NITI Aayog had to focus on one area of policy engagement it is perhaps this that would be the most relevant. Currently, the only meaningful engagement on this happens with the multilateral organisations, World Bank and ADB. The work of consultants in general is too superfluous to be of sufficient relevance.

Rana Hasan et al examined the role of labour market regulations in the excessively skewed (towards small firms and too few large firms) firm distribution in India's apparel sector. They use the division of country into states with flexible and inflexible labour market regulations (in relative terms) and find that a much large share of the sector's employment is in larger sized enterprises, both in formal and informal sectors. This holds even while controlling for state of infrastructure and competitiveness of product markets. For formal and informal firms (with more than 10 workers), their firm employment distribution shows. 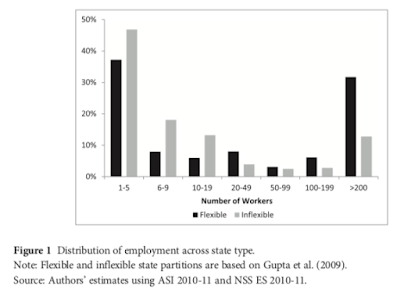 They also find a greater propensity among firms in state with inflexible labour regulations to hire contract workers. 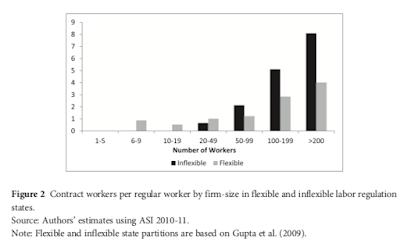 In another paper Rana Hasan et al use an index of the degree of spatial concentration among plants in an industry and find that industrial agglomeration in India declined substantially in 1998-2013. If true this deprives the country off the benefits of agglomeration in "boosting firm productivity and economic growth due to various positive externalities such as knowledge spillovers, labor market pooling, and input-output linkages across firms in industrial clusters".

They find that variations in industry policies followed by states (the differential tax incentives, capital subsidy schemes etc) and lower transportation costs (especially when frictions in land and labour markets are significant) have led to "dispersal of manufacturing, with the relatively more advanced among the backward districts experiencing large increases in numbers of firms and employment by 1998". They highlight that states which were intersected by the GQ highways saw much higher decline in industrial concentration than those not connected. They also point to a remarkably low domestic labour mobility,

Based on Bellet al.’s (2015) estimates of internal migration rates in 80 countries over a 5-year interval between 2000 and 2010, India is found to have the lowest migration rate. Similarly, Koneet al. (2017) note that although internal migrants represented 30% of India’s population in 2001, two-thirds were migrants within districts, and more than half were women migrating for marriage. They also note that in comparison to India, internal migration rates across states were nearly four times higher in Brazil and China, and more than nine times higher in the USA in the 5 years ending in 2001, despite the fact that in countries including China, urban–rural wage gaps are considerably lower than in India.

Their headline explanation for the decline in agglomeration and consequent dispersion,

reductions in trade costs alongside limited labor mobility and policy-induced scarcity of land should, in theory, have led to the dispersion of industry... inefficient land management policies and improved transport infrastructure may be driving the trend toward de- agglomeration... the hypothesis implies that forces of congestion are preventing a more efficient level of agglomeration from taking place, and there may thus be a role for policy to reverse this trend by reducing inefficiencies in land markets and encouraging greater labor mobility... our hypothesis (is) that congestion costs related to land and labor market frictions are disrupting the forces of agglomeration, at the potential cost of future economic growth.

In another paper the same set of authors examined the effect of place-based industrial development policies in India by evaluating the impact of a nation-wide program initiated in 1994 that aimed to promote industrial development in underdeveloped areas. The program classified districts based on their level of industrial backwardness and provided five year tax exemption to qualified manufacturers in backward districts. They found that the program was only marginally successful - only the better-off backward districts benefited, and that too to the extent of light manufacturing industries. Compounding matters, it displaced industries from the more backward districts and those marginally better than the treated districts.

The authors raise the intriguing policy takeaway that industrialisation is perhaps best achieved by targeting the movement of industries to areas where manufacturing has a comparative advantage than trying to move them to disadvantaged regions.

1. India's firm size distribution is excessively small, even compared to other developing countries. Also, complementarily, the number of really large firms are also excessively small. We have a "small is bad" problem. What is driving the small-ness? Is labour regulations responsible for discouraging businesses from "placing too many workers under one roof"? Is there anything else driving or contributing significantly to this trend?

2. Large manufacturing firms create their own value chains which support several formal and productive SMEs. But India has too few such large firms. This in turn limits the conditions required for productive SMEs to flourish. And conversely, too many less large formal firms mean their value chains are more likely to consist of smaller, less productive, and even informal SMEs. Therefore, the case for encouraging the development of a few very large domestic manufacturing units and also attracting a few large global manufacturers.

3. There is a trade-off between agglomeration economies and equitable growth. The former leads to spatial concentration of firms within an industry whereas the latter demands geographical dispersion. In case of India, the latter seems to have become the dominant force. This is a cautionary note against the standard policy of dispersing industrial investments across the country (and within a state itself) based on considerations of regional equity.
Posted by Urbanomics at 3:04 AM