How Japan is overcoming the demographic challenge

Is Japan the most impressive economic growth story among developed economies over the past decade? If we take the working age population index, we see this for real GDP per capita per working ages person... 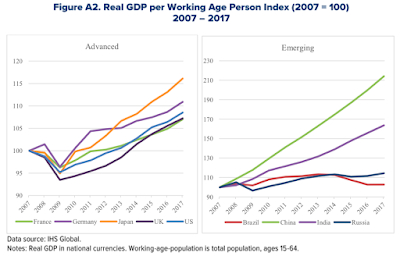 ... and this on employment 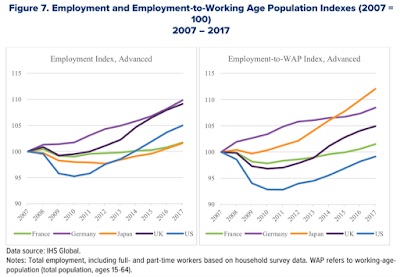 Since 2012, its working-age population has shrunk by 4.7 million, yet the number of people working has surged by 4.4. million... The proportion of the population in the labor force has risen sharply since 2012, by more than in any other major advanced economy. Japan is refreshing its labor force from three often-neglected pools: the elderly, women and foreigners. This offers important lessons for the many other countries that now, or will soon, face similar demographic pressures... The Japanese government has long sought to lengthen working lives; in 2004 it began raising the social security retirement age from 60 to 65 and required companies to either raise or abolish the retirement age or introduce a system for re-employing workers who do retire. This has kept Japanese men on the job well into their 60s and 70s... In 2012, female participation was 63%, marginally above the Organization for Economic Cooperation and Development average of 62%. By 2017, it had shot up to 69%, five points above the OECD average. Part of this is due to more older women working. Since 2012, the participation rate of women aged 55 to 65 has shot from 54% to 63%...

In 2015 it began admitting foreign construction workers to alleviate shortages as the country rebuilt from its 2011 earthquake and prepared for the Tokyo Olympics in 2020, and for housekeepers in special zones. In 2017 it did the same for nursing-care workers. It now allows foreign “technical interns” to stay for three to five years, and issues “green cards”—permanent residence—to highly skilled professionals after a one-year stay. Last month, the Abe government created two new visa categories that it expects to draw 340,000 additional mostly blue-collar workers from abroad, over the next five years. There has been a surge of foreign students who are permitted to work as long as they attend school in Japan... The number of foreign-born workers nearly doubled between 2012 and 2017 to 1.3 million... The combined effect of the elderly, women and foreigners on labor force has been to sustain Japan’s underlying growth rate in the past few years as well as hold off the wage and inflationary pressures that would ordinary emerge when unemployment is so low. 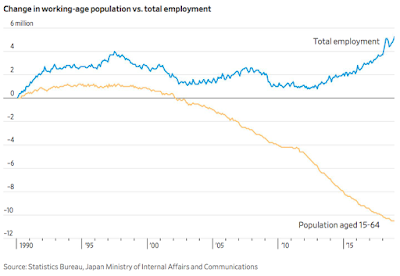 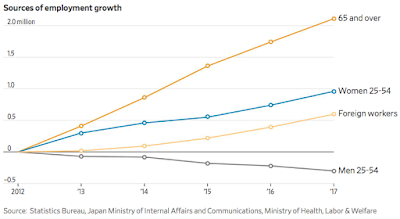 Japanese government policies, including but not only by the Shinzo Abe government, to address the country's demographic challenge have been admirable not just in terms of its range but also how they have emerged. These policies have emerged over time, being gradually phased in especially in areas like immigration, a politically sensitive topic in a closed and homogenous society, or where shifts in deep-rooted cultural traits are required like with getting women with infants to work more or fathers to share parental responsibilities. A Japanese version of "crossing the river by feeling the stones"?

For many developed countries facing similar demographic challenges with demanding political economy constraints to change, Japan shows the path.
Posted by Urbanomics at 3:49 AM