Management as Technology and SME productivity

I am increasingly convinced about the public policy relevance of the work of Nick Bloom and co which focuses on marginal improvements in management practices of small enterprises to enhance their productivity. Their World Management Surveys have found that "about a quarter of cross-country and within-country TFP gaps can be accounted for by management practices".

In particular, they find that focus on three simple issues - monitoring, targets, and incentives - can yield significant benefits. They find that these management practices are associated with higher productivity in manufacturing enterprises, and even increased learning and patient outcomes in schools and hospitals respectively. 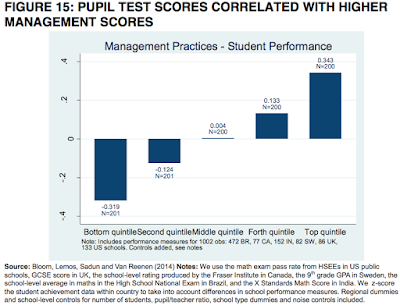 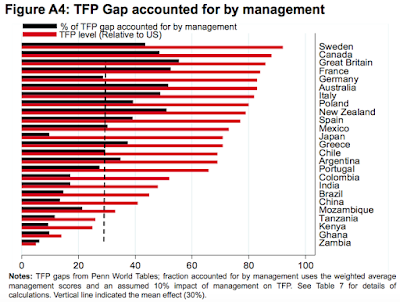 The conventional wisdom on promotion of such SMEs has largely revolved around fiscal concessions and subsidised credit and inputs. However, such incentives, by their very nature, exclude the overwhelmingly vast majority of enterprises which are small and informal. In other words, the current small industries promotion policies are designed to exclude the most eligible and maximise inclusion errors. The net result is that despite decades of pursuing such industrial policy, the business landscape in countries like India remain dominated by tens of millions of small and informal enterprises with abysmal levels of productivity. Even the small innovations away from fiscal measures have been confined to establishment of incubators and accelerators, which too perpetuate the same exclusions.

It is in this context that focusing on improving management practices assume significance. If it were to become possible to deliver commoditised management practices support that becomes accessible to all small enterprises, then the potential benefits can be significant. Such support can range from resource persons offering guidance to geographically concentrated groups of enterprises to easily customisable smart phones based inventory, procurement, performance and human resource management softwares. Apart from public production, these services can also be offered commercially through models like freemium services with the basic versions being subsidised, to start with.

For example, it would be reasonable to expect non-trivial cost savings from a simple inventory management application that provides stocking decision support for even a mom-and-pop grocery (kirana) store. Its basic version can be offered as a public good, and more value added services offered on a fee per service basis. With appropriate levels of public support, entrepreneurs can be encouraged to embrace this business model and offer such services, both as software and extension service.

It may therefore be useful for some governments, starting at sub-national levels, to repurpose a small share of their small enterprise promotion budget away from fiscal measures to the provision of such management support services as essential industrial public goods. The outcomes should be rigorously evaluated, the management support services refined to improve effectiveness, and the program gradually scaled up.
Posted by Urbanomics at 3:45 AM