1. Livemint on the limits to divestments in the banking sector,

The current price-to-book ratios for most PSBs is 0.2-0.4. The current market capitalization of PSBs forms just 29% of the total market cap of all the banks. Even if the government sells its stake in all PSBs, it will only be able to raise Rs.34,146 crore, which is just one-third of their capital requirement. 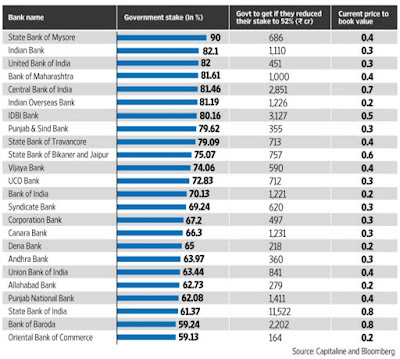 As I have blogged many times, the best way to approach this may be to advance the process of fixing the NPA mess, grant complete operational autonomy (including eschewing the use of banks to advance social agenda without compensating them appropriately), and then, once valuations start their upward climb, disinvest in a phased manner.

2. Eduardo Porter argues counter-intuitively that without NAFTA, the auto sector job losses in the US could have been much greater, as the entire production chain would have shifted out of North America,

The integration of production across countries with complementary labor forces — cheaper workers in Mexico to perform many basic tasks, with more highly paid and productive engineers and workers in the United States — turned out to play a central role in reviving the auto industry in North America. In the final analysis, Nafta might have saved hundreds of thousands of jobs. By offering a low-wage platform, Mexican plants increased the scale of production in North America, allowing domestic and foreign automakers to amortize their large fixed costs. Carmakers and parts suppliers tend to cluster relatively close together. So assembly plants in Mexico help sustain a robust auto-parts industry across North America. The Honda CR-V assembled in El Salto, Jalisco, for example, uses an American-made motor and transmission. Roughly 70 percent of its content is either American or Canadian. This regional integration gave the United States-based auto industry a competitive edge that was critical to its survival.

No rational theory can even remotely explain such crazy gyrations.

4. Private equity may be flowing into India, but the returns have been far from satisfactory,

Creditors in India recover only about 25 cents on the dollar in the four years or so it that takes to reorganize an insolvent company, according to the World Bank. In the U.S., the average is 80 cents in half the time... Over a 10-year period, private-equity returns have lagged well behind those in China. The internal rate of return on Indian investments made between 2004 and 2013 was 5.8 percent, compared with 22.6 percent for China, according to an analysis by the Centre for Asia Private Equity Research. The IRR for Asia as a whole was 11.8 percent. For every dollar invested in India in that time frame, an investor would have seen returns of $1.70, versus $2.30 in China.

5. The repo rate may have fallen from 8% in January 2014 to 6.75% in September 2015, but the interest-expense ratio has been steadily climbing for Indian firms across sectors. Livemint feels that the lack of demand and the resultant stagnation in revenues growth may be behind the trend. 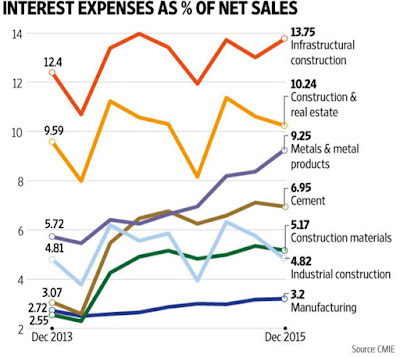 It is also likely that the interest rates are rising due to the rising volumes of interest during construction on delayed projects. In all such cases, without any revenues streams active, delays only tend to push up the share of interests in total project cost.

6. This is an astonishing graphic. Pointing to a reason for the liquidity squeeze, Livemint reports that bank deposit growth rate for 2015-16 at 9.9% was last seen in 1962-63! 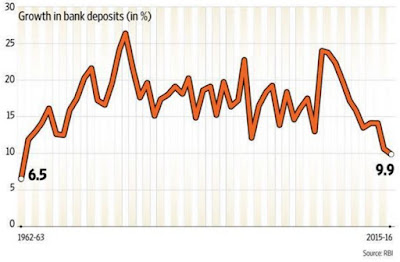 And currency in circulation, for reasons not yet clear, has been rising, thereby squeezing banking credit from the other side.

7. Very nice primer on how New York City gets its 900 MGD of water supply. 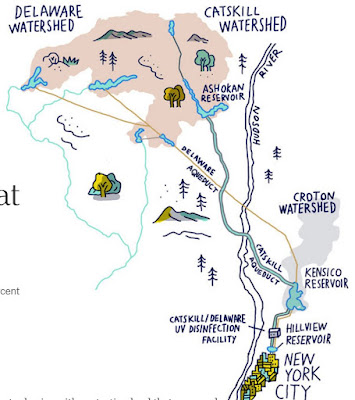 8. A primer on Brazil's Lava Jato (or Car Wash) investigations into the scandal surrounding the diversion of funds from contracts issued by Petrobras to politicians of the ruling Workers Party (PT) and its coalition partners.
Posted by Urbanomics at 12:15 AM