Negative interest rates may have broken new ground with relaxing the perceived technical constraint with the zero-bound. The ECB and central banks in Switzerland, Denmark, Sweden, and Japan have embraced negative interest rate policy (NIRP). It is estimated that globally there are now $7.7 trillion worth negative yield bonds outstanding. But the sheer scale and the likelihood of its persistence raise several uncertainties and pose troubling questions. 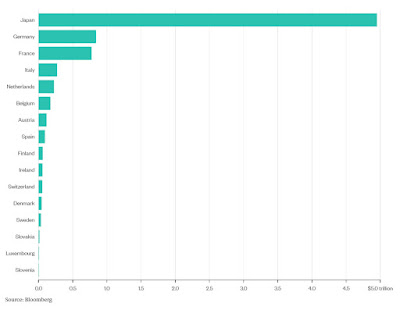 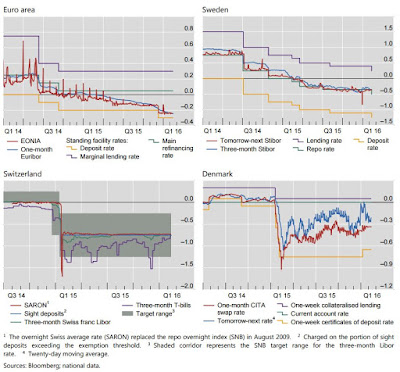 They have not been passed on to businesses and retail customers. This, as a new BIS report says on negative rates currently in place in Sweden, Denmark, Switzerland, Eurozone, and Japan, raises questions about its effectiveness in stoking demand,

The experience so far suggests that modestly negative policy rates are transmitted through to money market rates in much the same way as positive rates are. It also appears that they are transmitted to longer-maturity and higher-risk rates, although this assessment is clouded by the impact of complementary monetary policy measures. By contrast, so far retail deposit rates have remained insulated, partly by design. And, at least in Switzerland, negative rates have actually raised, rather than lowered, mortgage rates... there is great uncertainty about the behaviour of individuals and institutions if rates were to decline further into negative territory or remain negative for a prolonged period. It is unknown whether the transmission mechanisms will continue to operate as in the past and not be subject to "tipping points". 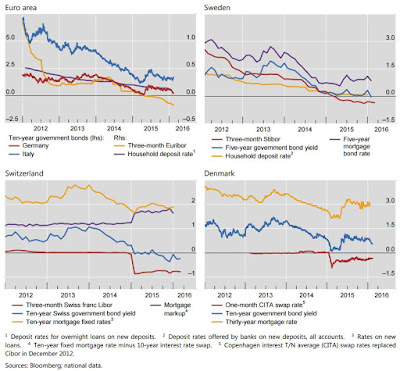 Banks have so far been reluctant to pass on the negative rates to deposits for fear that it will encourage depositors to exit and retain their money as cash. This also takes negative rate lending off the table. Banks have been betting on the view that the negative rates period will soon pass and appear to be holding out in expectation. But if, as it seems likely, the negative rate period endures for a long enough period, it will start seriously undermining the business models of not just banks but also insurers, both of whom rely on higher long-term returns. 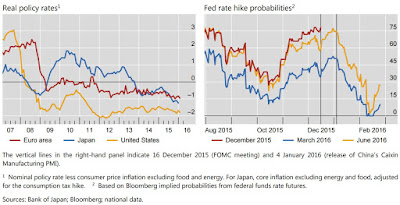 Another BIS report has raised concerns about the effect on persistence of negative rates on bank's viability as financial intermediaries,

Uncertainty about banks' earnings prospects have been heightened by the expectation that negative policy rates and exceptionally low interest rates out the yield curve may prevail for longer than originally anticipated. Interest margins have been squeezed, given banks' reluctance to pass negative rates on to depositors. Banks seem to have coped with the operational challenges so far, but this offers limited comfort if rates move lower and stay negative for a prolonged period.

Further, an increasing share of sovereign debt in Japan and Europe have been pushed into the negative territory, more than 60% in Japan. In Europe, this shrinks the pool of sovereign securities eligible for purchases under the ECB's asset purchase program, which prohibits their purchases. This narrowing of the scope of ECB's program naturally reduces its effectiveness, thereby forcing banks to pass on negative rates to depositors. If this starts encouraging depositors to convert to cash, fears about the viability of banking business models could start becoming real.

Recently Japan followed Switzerland to issue 10 year bonds at negative rates. In other words, investors were paying to hold the debt of the most indebted major economy. Large regular investors like pension funds and banks stayed away and left market participants worried about unforeseen risks,

The buying appears to have been almost entirely dealers and speculators looking to hold the paper for a brief time or covering short sales accumulated in expectation of the yield dropping into negative territory. Traders expect much of it to be flipped directly back to Japan’s central bank in a few weeks as part of a bond-buying programme, also designed to stimulate the economy... As well as forcing wholesale adjustments to the structure of many investment products, analysts at Nomura have warned that the JGB market could now be prone to regular phases “where fair prices are no longer obvious”... Another motive behind the dealers’ buying appears to be a straightforward play on the BoJ’s upcoming “rinban” bond purchases and the opportunity to sell to the central bank at a profit. 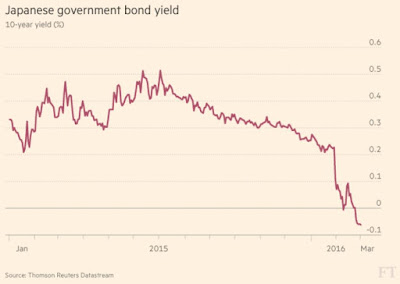 In fact, these are signs of a 'carry trade' developing within 10 year bonds, in anticipation of volatility. If the yields go further down, speculators could pocket gains from the increases in the price of their bond holdings, and so on. But how far it can go down? And for how long can it persist? Nobody knows with any degree of comfort. This is clearly a Knightian world.

Update 1 (21.03.2016)
Gavyn Davies has concerns about the negative rates on bank profitability given the difficulty of lowering deposit rates below zero.

Update 3 (10.06.2016)
Concerned at losing profitability due to negative interest rates, at least some German and Japanese banks are apparently considering keeping their excess cash in safe deposit boxes inside underground vaults instead of paying to keep them with the central banks! However, this would incur various storage costs (rent, security etc) and insurance fees. It therefore would mean that one physical limit to how much low the rates can get would be the total storage costs.
Posted by Urbanomics at 6:00 AM