1. The mezzogiorno, the southern part of Italy, has long been considered a poor cousin of the prosperous north. But the extent of economic divide is truly stunning,

2. San Francisco has borrowed a unique nudge experiment from Hamburg to stop urination at public places. It has covered nine public walls with repellent paint which makes pee spray back on the person's shoes and pant!
Public urination on city walls by night revellers is a big problem in the city and has not been controlled despite a legislation banning it as well as fines of upto $500.

4. As it seeks to advance its soft-power, China is doing it the only way it can, spreading wealth around to "buy respect",


And it is backing up its soft-power ventures with serious money: $50 billion for the Asian Infrastructure Investment Bank, $41 billion for the New Development Bank, $40 billion for the Silk Road Economic Belt, and $25 billion for the Maritime Silk Road. Beijing has also pledged to invest $1.25 trillion worldwide by 2025. This scale of investment is unprecedented: even during the Cold War, the United States and the Soviet Union did not spend anywhere near as much as China is spending today. Together, these recent pledges by Beijing add up to $1.41 trillion; in contrast, the Marshall Plan cost the equivalent of $103 billion in today’s dollars.

5. Bill Easterly links to this evocative photo of volleyball being played with the US-Mexico border as the net. 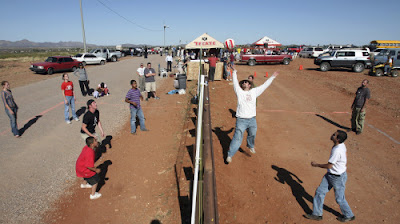 6. Robert Solow describes the failure of real wages to keep up with productivity in terms of 'monopoly rents', a third component to return to labor and return to capital,

There is a third component which I will call “monopoly rent” or, better still, just “rent.” It is not a return earned by capital or labor, but rather a return to the special position of the firm. It may come from traditional monopoly power, being the only producer of something, but there are other ways in which firms are at least partly protected from competition. Anything that hampers competition, sometimes even regulation itself, is a source of rent. We carelessly think of it as “belonging” to the capital side of the ledger, but that is arbitrary. The division of rent among the stakeholders of a firm is something to be bargained over, formally or informally... It is essential to understand that what we measure as wages and profits both contain an element of rent...

The suggestion I want to make is that one important reason for the failure of real wages to keep up with productivity is that the division of rent in industry has been shifting against the labor side for several decades. This is a hard hypothesis to test in the absence of direct measurement. But the decay of unions and collective bargaining, the explicit hardening of business attitudes, the popularity of right-to-work laws, and the fact that the wage lag seems to have begun at about the same time as the Reagan presidency all point in the same direction: the share of wages in national value added may have fallen because the social bargaining power of labor has diminished.

And he feels that the growth of casual labor is amplifying the trend,


This shift toward more casual labor interacts with the issue of the division of rents. Casual workers have little or no effective claim to the rent component of any firm’s value added. They have little identification with the firm, and they have correspondingly little bargaining power. Unions find them difficult to organize, for obvious reasons. If the division of corporate rents has indeed been shifting against labor, an increasingly casual work force will find it very hard to reverse that trend.

7. Brilliant essay in the Times on the punishing work culture at Amazon, the place "where overachievers go to feel bad about themselves" and one "which is running a continual performance management algorithm on its staff".

8. Finally, a very interesting graphical representation of the quality of football matches in various European football leagues using the dynamic ELO rating data for football clubs. It maps the top 50 highest quality matches based on average quality (average of the ELO rating of the two clubs) and well-matched opponents (lowest difference in their ELO ratings) 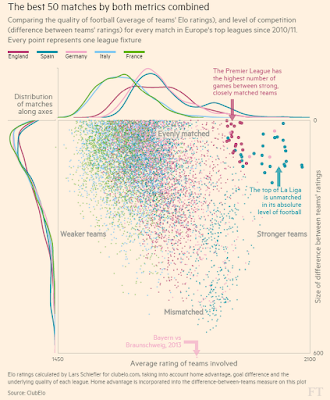 The graphic clearly shows why the Spanish Primera League trumps all others in terms of both quality and intensity of matches.
Posted by Urbanomics at 7:40 AM