From Livemint, adding to the long list of badly indebted corporates, comes debt-laden property developers, whose problems are exacerbated by unsold inventory,

At brokerage Kotak Securities, analysts estimate unsold inventory held by a group of leading Mumbai developers alone now stands at some Rs.53,400 crore—with an additional Rs.36,800 crore of project launches in the pipeline. That puts the current, unsold area in Mumbai at almost the value of the total sold in the 2014 calendar year. The backlog, analysts estimate, could take more than a decade to clear... It now takes developers about four-and-a-half years to turn property inventory into cash, more than a full year longer than it takes developers in China, according to Thomson Reuters Starmine data.

Another article points to a study by Knight Frank India which highlights the large volumes of inventory piled up across the largest cities. For example, in Delhi, even if no more properties are added to the market, the current inventory will take about 14 quarters to be sold. 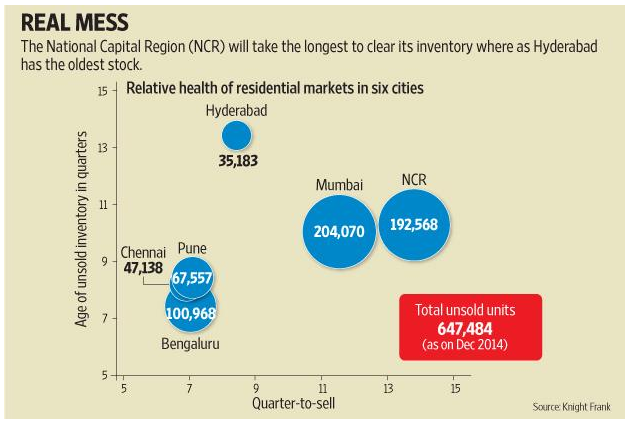 However, this glut, mainly at the middle and upper end of the market, stands in stark contrast to the severe shortage at the lower middle income and lower income level (Rs 5-20 lakhs) markets. This trend points to a market failure in the housing market, demanding public policy action.
Posted by Urbanomics at 10:16 PM

Every pandit who studies the housing market knows that there is oversupply at the upper end and severe shortage at the lower end of the market. The only people who don't seem to know this ....are real estate developers! Are the developers too uppity to touch the money of the lower class? Or is there something else that explains this apparently missed opportunity to earn profits?

Dear Parth, thanks for raising this. I am inclined to three explanations.

1. The margins at the upper end of the market are much higher than at the lower end, where price-sensitivity is very high. Lending credence to this is the fact that, even as stock piles up at the upper end, developers have been loath to cut prices significantly to clear inventories.
2. The risks of doing business at the lower end are higher - eg. the collateral and other recovery risks are far higher at the lower end, lower income mortgage market is at its nascent stages, etc.
3. The market at the upper end, hitherto atleast, has been large enough to accommodate the supply-side, even with current problems of inventory pile up and muted demand.

In any case, there is the larger issue of whether, barring a few exceptions, markets at the bottom open up on their own through private matching of demand and supply.

All three are good reasons and i have nothing much to quibble there, Gulzar. The question i have is this: is this unique to low-end housing market? Does it apply to low-end car market, low-end beverage market (or let's just pick one beverage, whiskey)?

Classic example is of Henry Ford and Henry Royce, low end and upper end car market. Who made more money?

Also the point 2 above is more of a loan market problem, and i assume at the lower end, most of the transactions are fully paid and probably very little of the price is financed through formal institutions.

And the point 3 could just be part of business strategy, like luxury goods prices don't go down much during recession--diamonds are forever and forever at 'high' prices!

Dear Parth, thanks again for the comments. i agree completely that this applies to a whole host of markets, those where segmentation is natural. and that was the larger point I tried to make in my earlier comment.

it is something like this. in many products, as markets develop, businesses feed off those parts where marginal returns are the highest, gradually expanding coverage to the remaining market. this expansion happens under three conditions

2. the profit opportunities (from scale) in the untapped markets outweigh the perceived risks and costs from servicing those markets - a tipping over happens

my preference would be for the first two processes of expansion. but, in some cases, as with affordable housing (and not alcoholic beverages, though a few state governments even do that!!), public policy may have a role to play.

the ford/royce comparison reinforces the point - the latter tried to service a small market at the other end of the spectrum where the former realized the (scale) potential of the market at the upper-middle end.

about the loan market problem, my guess is that the business model and transparency requirements imposed by size would prevent the larger real estate developers from pursuing a cash transactions based model. in any case, the transactions cost would be too high and unmanageable when scaled up

I agree with the first two points on when the companies would look to enter a new/ low price market. No disagreement there. It seems to me that you are thinking ONLY from the perspective of existing firms, in the high price markets, deciding whether or not or when to enter the low price market. I may be completely wrong but that's how i read it.

I would think that real competition comes not from existing players but from new players. If i was a small developer trying to enter housing market, where would i start? Would i start In the high price arena where there are a lot of established players and probably already excess supply? More likely in a different niche of the market where i would be a big fish (in a rather small pond).

So the existing players as well as new entrants both are critical for markets to work. This is the reason economists put so much emphasis on 'free entry and exit.'

I am not questioning your points, just expanding them to put emphasis on new entrants, which probably you already have accounted for.

So there could be myriad reasons why a particular market may be under-served. Now the question is what role public policy can play in this situation?

Here we can think many different supply-side as well as demand-side interventions. My general preference is for demand side engagement; supply side is the role of the entrepreneurs and they should figure out how to do their business (assuming a right regulatory system generally in place). I would give home ownership vouchers to low income families. Vouchers come in many shapes and sizes and depending on various constraints one would choose one kind over the other kind of voucher to implement the idea. But fundamentally focus on demand side interventions (again assuming rational regulatory system or the first policy intervention could be to make it so).

Thanks again for the comments. I agree with you on the logic of competition from new entrants. But the first order incentives and constraints are the same for both incumbents and new entrants, especially given the high entry barriers - land and inventory costs.

The vouchers point to well taken. In fact, one of the biggest failings of our urban housing policy has been its focus on home ownership to the exclusion of rental housing. Unfortunately, it continues. I feel that the potential benefits from rental housing are considerable and its chances of success greater. Vouchers have an important role to play in the effective administration of any rental housing program.

Market size of Indian Real Estate is expected to touch US$ 180 billion by 2020. The Indian real estate sector is one of the most globally recognized sectors.