As we enter Budget fortnight in India, two more signs that a transition to higher economic growth trajectory may be some distance away. First, corporate outlook, a pointer of underlying aggregate demand conditions, as reflected in their earnings data does not look promising,


For the three month period ended December 2014, India Inc’s profit growth has been the worst in five quarters, with the aggregate net profit of 2,941 companies declining 16.9%. Even after adjusting for one-offs (or extra-ordinary transactions), it is down 6.3% over the year-ago period... Sales growth is also the weakest in at least 12 quarters. For the Sensex companies, the reported net profit is down 6.5% year-on-year, its weakest show in six quarters, on a 2.2% decline in sales... On aggregate basis, Sensex profit was 7.5% lower than estimates... FMCG companies witnessed a dismal volume growth of 3-7% due to delay in recovery of urban discretionary demand... Operating profit margins of 1,992 manufacturing companies in the sample were down 100 basis points year-on-year and 140 basis points sequentially, largely due to decline in sales and a rise in employee and power and fuel expenses. 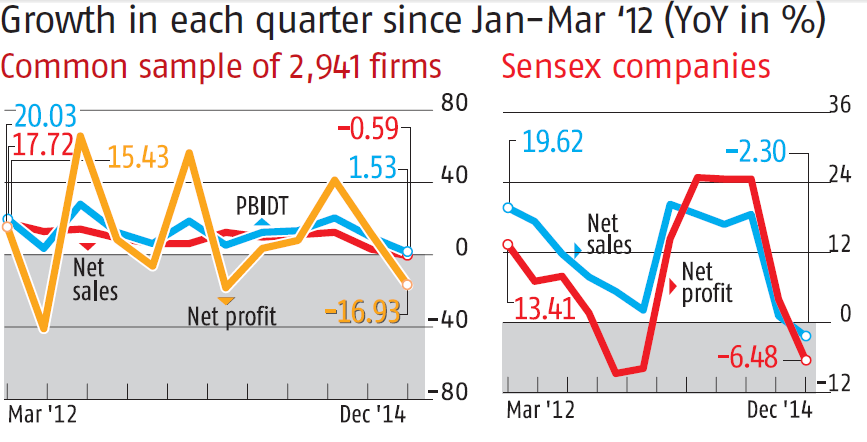 Second, BS also points to a rise in gross NPAs among public sector banks, except for SBI,


Barring State Bank of India, most public sector banks reported a sharp rise in bad loans in the quarter ended December, 2014... bad loans of over Rs 24,000 crore were added to already heavy kitty of stressed assets, and public sector banks’ (PSBs) share in it was a staggering Rs 21,466 crore... Banks are likely to see a spike in loan restructuring as the window for getting regulatory leeway in terms of lower provisioning closes on March 31 this year. In the nine months of the current financial year, gross NPAs worth Rs 51,252 crore were added. Thus, outstanding portfolio of bad loans of listed banks was Rs 4, 85,000 crore by the end of December 2014... Rating agency ICRA has indicated that the gross NPAs at system level would breach its earlier estimate of 4.2% by March 2015. It could be around 4.3%.

I have told this story earlier. Aggregate demand remains subdued in the face of inflation-induced decline in purchasing power. Rural demand, a major contributor to aggregate demand in the high growth 2003-08 period, was propped up by both the NREGS employment program and the gradual increases to Minimum Support Price (MSP). Without commenting on its merits, their recent scaling back is certain to adversely affect demand. The resultant downward pressure on top-line growth and profitability of corporates, who are already reeling from debt-laden balance sheets, would discourage new investments. The distressed balance sheets of credit suppliers are only a second order problem.
Posted by Urbanomics at 8:03 AM