Make for India Vs Make in India

The debate triggered by the remarks of the Governor of Reserve Bank of India, Raghuram Rajan, on the central government's high-profile "Make in India" campaign missed an important insight about the strategy that should be adopted to encourage manufacturing. The Governor had cautioned about excessive focus of the campaign on both manufacturing and external markets and suggested "Make for India". So, how are 'Make in India' and 'Make for India' different?

Both are anchored around the East Asian manufacturing-led rapid economic growth strategy. The success of the East Asian model depended on both domestic and external demand. Proactive government policies encouraged manufacturers who produced export quality goods for both domestic consumption and exports. In all these cases, the domestic demand was supported by a wide enough consumer base for good quality products and the domestic market in turn provided the platform for manufacturers to develop and refine those products to world-class standards.

In contrast, manufacturers in India may struggle with domestic demand. The headline numbers that proclaim large declines in those living 'below the poverty line' (BPL) does not mean that the new entrants into the 'above the poverty line' (APL) are ready for middle-class consumption. In fact, as a MGI report from last year shows, atleast 56% of the country's population do not have the resources for their basic needs. Further, nearly 95% of the households make less than Rs 1.5 lakh a year.

It is fair to argue that these consumers are likely to be deeply price sensitive and less concerned about quality beyond some basic considerations and durability. Only a tiny sliver of the market is likely to be demanding on quality. A manufacturer making automobiles, clothing, or consumer durables is therefore encouraged to keep costs down, thereby discounting for quality. Margins are also minimal in this side of the market, thereby limiting their ability to expand or move up the quality escalator. Needless to say, none of these products can be exported. Export quality manufacturers are constrained by the limited domestic market base to refine their products through a "learning by doing" approach. 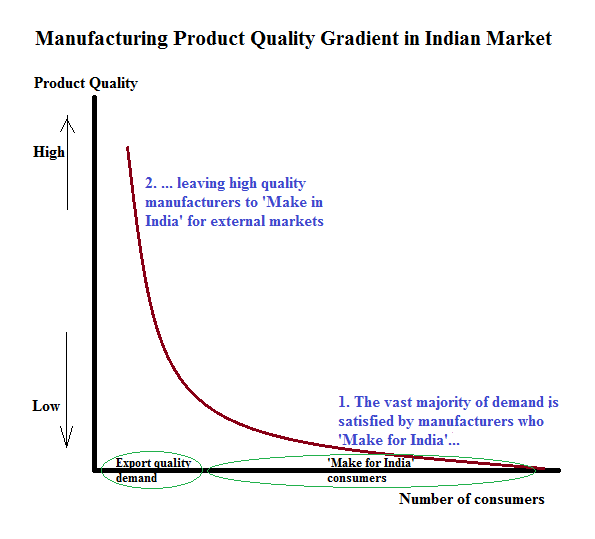 In the circumstances, India's manufacturers have two choices - 'Make for India' or 'Make in India' for export markets. As illustrated, they are qualitatively different choices. The former leaves them entrapped in a low-level equilibrium, exit from which is very difficult. Its market dynamics makes it difficult for these manufacturers to re-orient their production to also meet export markets. Further, manufacturers in this end of the market face stiff competition from cheap imports from competitors in China and elsewhere who have moved up the quality chain and can therefore produce the same quality at far competitive prices. Therefore any campaign to 'make in India' by 'making for India' is unlikely to achieve intended results, atleast in the medium-run.

The latter choice - 'make in India' for external markets - requires technological and professional expertise, which only a handful possess, and an enabling infrastructure and policy environment, which is sorely deficient. Here, India has sought to emulate the latest entrants into the "flying geese" model like China and Vietnam where public policy encouraged greater external-market focus through the establishment of export-only Special Economic Zones. But in order to make an impact, this strategy requires massive investments on infrastructure in these zones and its surrounding areas as well as equipping public systems there with much greater state capability. Further, it also assumes the presence of a receptive external market. The reliability of these assumptions are, at best, questionable.
Posted by Urbanomics at 7:00 AM