"Optimism bias" in a graphic 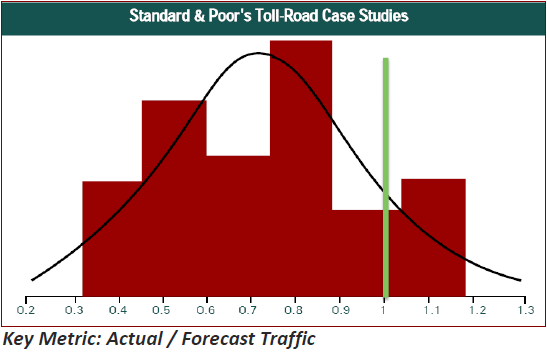 A CRISIL study of 15 NHAI projects shows that traffic growth in passenger car units (PCUs) was just 3-4% in 2011-12 and 2-3% in 2012-13, as against 7-8% in the 2006-11 period. This slowdown is due to the slowdown in commercial vehicles traffic, which account for over three-fourths of total traffic. In another analysis of 6 NHAI projects, it found that base traffic was 20-40% lower compared with NHAI estimates and average project returns 8-14% compared with the 22-26% based on NHAI traffic and cost estimates. This meant that 5 out of the 6 projects had average debt service coverage ratio (DSCR) of less than one in the first five years of the operation, thereby making debt restructuring inevitable. Re-negotiations invariably follow.

It is for this reason (and also cost over-run due to construction delays) that governments in UK, Australia etc include an "optimism bias" into their calculations while evaluating infrastructure project bids. The "bias" is the difference between the bid parameter and the average of its actually realized valuation from all previous projects. It is also the reason why EPC contracts, bundled with medium-term operation and maintenance activities, are gaining favor over BOT PPPs.
Posted by Urbanomics at 6:00 AM

Historical data for actually realized valuation is not good enough for bias estimates... Basically "normal" financing (read bank) will not help at all...

Should we not have a clause to renegotiate contracts after say, 3 years, based on actual traffic seen. This would remove the traffic estimation risk away from the entrepreneur.